The host city was Daegu, South Korea (five hours south east of Soeul), the third largest city, and in my opinion first in heat and humidity in Korea.
The Summer Universiade Games are the second largest sporting event next to the Olympics. There were more than six thousand participants competing in Daegu.

The host city was Daegu, South Korea (five hours south east of Soeul), the third largest city, and in my opinion first in heat and humidity in Korea.

The Summer Universiade Games are the second largest sporting event next to the Olympics. There were more than six thousand participants competing in Daegu.

Universiade Games often do not get a lot of media attention in North America. This is because the Pan-Am games are a bigger event that attracts a higher level of athlete. It seems to me though, that North America is about the only place in the world that doesn’t go nuts for these games. 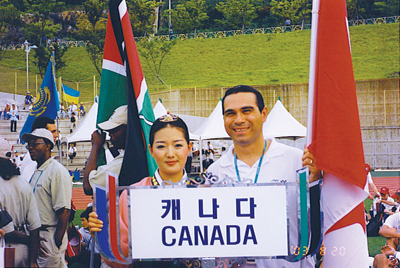 Before leaving, I received a large package at my door. If I wasn’t already excited about going, unpacking a full team uniform, a sling backpack, a leather briefcase, shorts and, of course, the requisite hats and pens, sure did it for me!

This was my first major games event. It was an absolute rush walking into the World Cup Stadium. Sixty-six thousand spectators were cheering Canada on for the opening ceremony of the FISU’s (International University Sport Federation) Summer Universiade Games.

The ceremonies were complete with processional Olympic-style music, fireworks and dancers. I could not raise my head to look out into the screaming and joyous crowd as we (Canadian delegation) were walking around the track, because the amount of energy almost overwhelmed me.

The Stadium was newly built for the games, along with numerous condominium buildings. These condos, named Athletes’ Village, housed the athletes and medical staff for the duration of the games. It was rumoured that each condo sold for $100,000.00 U.S. The parking garages below the buildings were made into cafeterias, where the food was pretty good, and available around the clock.

I was the only Certified Sport Massage Therapist on a team of Medical Doctors, Athletic Therapists (AT) and Physiotherapists (PT). Needless to say, I was very popular, some days too popular, among the more than 150 Canadian athletes.

Each member of the Medical Team oversaw a particular Canadian team (i.e. women’s volleyball and men’s basketball). The ATs and PTs would screen athletes and refer the injured athletes to me. I treated various conditions such as shin splints, rotator cuff strains, and low back strains. I focused on treatment and recovery massage while the ATs and PTs gave flushing massage so that I would not be burnt out.

For 12 days I worked 8:30 a.m. to 10 p.m. with several meal and relaxation breaks. After about the seventh day of the games the treatments tapered off as certain sports were finished. I averaged about 16 athletes with the most on one day being 22.

Other Certified Sport Massage Therapists forewarned me about the grueling schedule so I trained for two months prior to leaving. My training included pilates and weight lifting, massage therapy, active release
therapy, osteopathy and chiropractic therapy. It paid off because my body was starting to feel only a little sore near the end of the games.

I did find time to visit some events. As expected, there were very enthusiastic fans in the stands and the level of skill was great to watch. I also came home with quite a wardrobe,
as there was quite a business in trade going on with athletes and medical personnel alike. I traded some Canada hats I took with me for some gear from Great Britain, Australia, New Zealand and, of course, Italy! Near the end of the games, some of the teams were selling their uniforms and other gear for quite a deal.

This was the most rewarding experience of my professional career. I hope that this will leads to more opportunities in the near future.

I am glad I went through the certification levels to become a Certified Sport Massage Therapist. This allowed me the opportunity to visit another country and to treat our elite Canadian athletes.