Former Paralympic gold medalist Mark Bentz now runs a massage therapy practice in downtown Vancouver. He says the key to a successful clinic and a fulfilled life is simplicity. 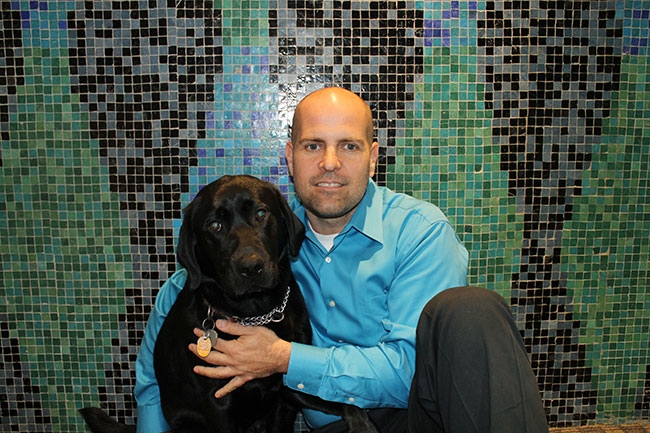 Mark Bentz says massage therapy has allowed him to live life on his terms.

“I needed something I could always rely on,” Bentz says. “When you have a degenerative disease, you’re always having something taken away from you, which makes it hard to plan for the future.”

Bentz started losing his sight at the age of 9, but he hasn’t allowed his blindness to stop him from living. Bentz entered the massage therapy field 22 years ago after hearing about a weekend course from a friend. Then a third-year kinesiology student at University of British Columbia, he fell in love with massage therapy almost immediately, and transferred to the West Coast College of Massage Therapy shortly afterward.

Bentz says he entered massage therapy because he wanted a career that could afford him a great degree of independence.

“Studying the human body is fascinating, but massage therapy allowed me to work with people. Plus I love sports, so I thought massage therapy was cool. But what really gave me the warm fuzzies was realizing, ‘Wow, I can run a business and be independent, and if anything goes wrong, I can just keep practising.”

Reinventing the RMT business
Bentz is now the owner and director of Electra Health Floor, a multidisciplinary health and wellness practice that he started 10 years ago, after practicing massage therapy for 12 years.

Bentz brings a unique approach to clinic management, one that he honed through years of trial and error.

“We run the clinic 12 hours a day, seven days a week. But our practitioners work in six-hour shifts. Back when we started, therapists said that would never work. ‘No one wants to work six hours a day,’ they said. But now it is the norm and everyone wants to work the shift I created. It’s a better lifestyle, and that’s what caught on.”

Bentz says he structures his work around his life, and he encourages the practitioners who work with him to do the same. When he brings new practitioners into his practice, each practitioner sets his or her own hours and fee. Bentz says it’s a simple strategy that is often overlooked.

“When you start ignoring the simple things, that’s when people have problems. I sit down, mentor and coach all the  practitioners and help them figure out how they want their practice to grow.. It’s about putting your lifestyle first. It works.”

Bentz says these work-smarter-not-harder practices are about thinking long-term and acting as part of a team. While the multidisciplinary nature of his clinic has made his business successful, he’s had to invest a significant amount of effort to ensure smooth operations, and there are a variety of weaknesses that need to be controlled and accounted for.

“The hardest lesson I ever learned was that there has to be one captain,” he says. “I used to have another multidisciplinary clinic, and I signed one-year leases with the other practitioners. But over time, infighting crept in. I tried to negotiate, to stickhandle those problems, and as it turns out, there was one person who was responsible for all of the conflicts.”

Bentz thought the responsible party would admit to overstepping her boundaries and correct her behaviour; however, she wasn’t amenable to conflict resolution. Bentz suggested to this practitioner that perhaps she’d be happier at a different clinic, but she refused to leave. And with a signed one-year lease in her hands, Bentz couldn’t force her out.

“I had four people ticked off at each other, not wanting to make any changes, and all of them wanting to make their lives and everyone else’s lives miserable. That’s the biggest thing I changed that made my practice successful. I’m the captain, and at any time I can get rid of staff if they aren’t a good fit.”

Bentz says it’s essential to have one person acting as the captain, but taking a leadership role in a multidisciplinary clinic requires a specific approach. Bentz no longer practises massage therapy, and instead devotes all of his time to running his business. He says removing himself from active practice was the only way to maintain his integrity as the clinic owner, keep his team acting as a cohesive unit, and avoid what he calls “small clinic syndrome.”

Lessons from the hockey rink
Bentz’s use of hockey metaphors – stickhandling problems, having one team captain – is no accident. Bentz is an avid hockey player and the vice-president of the Canadian Blind Hockey Association. Every Friday afternoon he hits the ice with the Vancouver Eclipse, Vancouver’s visually impaired hockey team, to enjoy Canada’s national pastime.

“Hockey is everything to me. It’s my favourite thing to do. We have provincial and national tournaments, and we’re growing the sport into the United States. We want to have a Four Nations Cup, and then get eight countries on board and go to the Paralympics. We’ve already got four or five teams across Canada, and we’re growing rapidly.”

Hockey isn’t the only winter sport that Bentz loves. A competitive alpine skier, he made headlines in 1984 when he won two gold medals at the Winter Paralympic Games in Austria. Bentz was awarded gold medals for men’s downhill para-alpine skiing (class B2) and men’s alpine combination skiing (class B2). In both races Bentz narrowly edged out fellow Canadian Uli Rompel, who took home two silver medals.

Bentz says his background as a professional athlete has taught him a variety of important lessons that helped him build a successful business – lessons like the value of discipline and the importance of taking risks.

“You have to wake up and train. It’s not fun, it’s not sexy, and it hurts sometimes, but those are the days that allow you to compete. And the one thing that people don’t realize is how much support athletes need – the parents and siblings have to make sacrifices, and it shifts the family structure. There’s a lot of support that has to happen, and it’s the same thing with massage,” Bentz says.

He adds that commitment to coaching is essential for training effective therapists. That’s one of the reasons why he’s planning to open a mentorship and coaching clinic for young RMTs who are less than two years into practice.

This new clinic will involve hands-on practice to give new massage therapists on-the-job training, as well as coaching and weekend workshops from senior therapists. Part of this training will involve teaching therapists to become not just experts, but unique experts.

Adaptation as a learned skill
Part of Bentz’s drive to start the coaching clinic is due to a variety of changes that, in his view, are threatening massage therapy as an industry. Bentz says massage therapy is at risk of becoming a commodity, and the field is facing challenges that will require co-operation across provinces and practices.

“Fifty per cent of all extended health care billing is for massage services. That’s huge. Physiotherapy is only at thirty per cent. The insurers will have to deal with us somehow, and they won’t want to pay more for massage therapy. We’re all going to face decisions that will require a united front, and there’s a part of our community that isn’t united.”

As a former vice-president of the Canadian Massage Therapy Alliance, Bentz is quite familiar with the divisions that separate massage therapists across the country. Provincial differences in billing rates and professional designations are just some of the factors preventing massage therapists from maintaining a united front.

“British Columbia, Ontario, and Newfoundland have RMT designations, but the other provinces don’t. We can’t even agree on what to call ourselves. Saskatchewan and Manitoba call themselves something different. Physiotherapy and chiropractic are united fronts, but massage therapy isn’t. Lack of unification will always come back to bite you.”

While Bentz is concerned about the challenges facing the profession, he’s still passionate about massage more than 20 years after entering the field – and he’s adopted a philosophy on life that, simply, works.

Part of that philosophy involves being open to change, as he was when he first decided to get a guide dog. For a long time he resisted the idea of a guide dog, as he thought it would make his blindness too obvious. But he soon discovered an unexpected advantage of having a guide dog.

“Mindy is a life-changer,” he says. “When you have a white cane, people don’t know how to approach you. It’s uncomfortable, and it’s isolating. But when you have a dog, you’re a VIP in the room. When you can just focus on the dog, everything works out.”

Bentz says that living a fulfilled life while blind involves changing others’ attitudes and perceptions about blindness while also maintaining one’s own independence.

“People need to realize that it’s okay to be blind. It seems socially easier to coddle and support rather than saying, ‘hey, whatever, move on.’ But nobody is going to support you as an adult. So let’s stop talking about your limitations and start talking about the life you want to live.”

Blind ice hockey returns to Toronto
The sixth annual Canadian National Blind Hockey Tournament will take place from March 30 to April 1, 2018, in the Mattamy Athletic Centre at Maple Leaf Gardens. Six teams in two divisions will play a total of 11 games, and the full tournament will be broadcast on AMI. Look for Mark Bentz to make his return at the blue line as a defenseman for the Vancouver Eclipse.

Treating patients by touch
Bentz views his blindness as a strong asset in his massage therapy practice. Without the benefit of sight, he says, he’s unable to make assumptions based on visual information – which means he can get to the heart of problems more quickly, and immediately feel what adjustments are required.

Not uncommon
There are a handful of other blind massage therapists in Canada. Patrick Renny of Vancouver made headlines in 2015 when he crowdfunded his tuition for massage therapy school, raising nearly $18,000. Renny graduated in April 2017, and his provincial board examinations began on August 30. Kim Holdbrook of Montreal is currently practicing in Côte-Saint-Luc, where she employs five other blind massage therapists. Glenn Cameron, a former pilot, runs a massage therapy practice in Cornwall. And Jamey Wagner of Edmonton – whose visually impaired dragon boating team would later win the gold medal at the 2014 International Dragon Boat Federation championships in Italy – retrained as a massage therapist at MacEwan University after losing his sight in a car accident.

Mike Straus is a freelance writer based in Kelowna, British Columbia.