Features Management Operations
A View From The Top

This story starts in a snow bank off #93 Banff to Jasper highway beside a large sheet of vertical frozen ice called Weeping Wall. Kevin Nielsen and myself met some years ago on an ice climbing training course in Canmore, Alberta. There we were sitting in the snow in February drinking some bourbon and beer.

This story starts in a snow bank off #93 Banff to Jasper highway beside a large sheet of vertical frozen ice called Weeping Wall. Kevin Nielsen and myself met some years ago on an ice climbing training course in Canmore, Alberta. There we were sitting in the snow in February drinking some bourbon and beer. We had climbed painfully for the day and were enjoying some après treats. As usual, we flew into one of our philosophical rages and began to spew great amounts of deep understanding of ourselves and climbing and the world in general. After that, we took our second sip of beer. 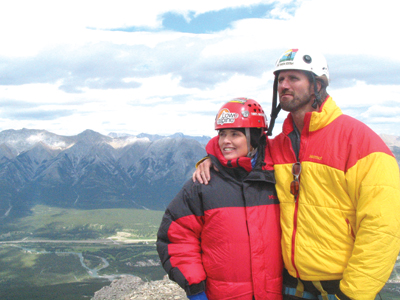 Kevin suggested we take my sister, Sherry, climbing. Since Sherry is such a giving person – generous with her time and talents – it would be nice to give her an experience she would never forget.

Sherry has muscular dystrophy and can’t walk, so this endeavour would require adaptations, some practice climbs and, firstly, some convincing. How hard could it be?

I took the hatched plan home, ran it past my wife, Susan, and then strategically introduced it to Sherry. I gave her the “beautiful sunrise, closer to nature and quality time with friends and family” routine, she bit – I yanked hard and set the hook!

We would need a team. Dave, Gord, Jim, Rick, and Alan were recruited – all high ability, highly competitive climbers and friends. 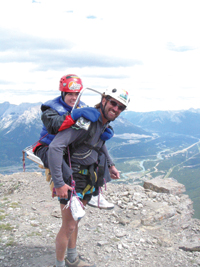 We started out on July 3, 2003 from Canmore, Alberta to tackle Mount Rundle. Media representatives from the Calgary Herald, CBC Radio and the Canmore Leader covered the climb. Cam Henke from the Muscular Dystrophy Association joined us for part of the trip.

The route up was a lot steeper than what we had trained on. The camaraderie, however, made the carrying much easier than I was expecting.

The team respectfully adhered to the substitution schedule I had laid out and all egos were left off the mountain. It was pure joy for me to participate in a “team” environment. These guys not only treated Sherry with respect and friendship, but were amazingly careful during the ascent and decent of the climb.

Sherry found the nature of the terrain made her work harder to stay in her seat. Those abs were a crunchin’! Once on top at around 2 in the afternoon, we heard the buzz of a chopper heading our way. Not knowing it was friends, I told Sherry not to wave in case they thought we were in trouble … oops. 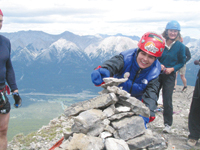 After some philosophical banter, which was lead by Sherry and Alan, we got all snuggled in for some sleep. Despite the rain that started at 8 p.m., most everyone slept well.

In the morning we fixed some hot drinks while the princess sat under the Ducky umbrella!

The media reported of our night “under the stars” – they left out the 2,000 feet of nimbus clouds between those stars and us! Never the less, climbers’ spirits are not dampened by a bit of inclement weather.

Near the top we did get a little sign of thanks from Sherry’s daughter, Ashley. The clouds parted just enough for her heart to spill out a rainbow, to say she is fine and waiting to thank us in person a little later.

Ashley died at the age of 13 from respiratory complications due to her affliction with Muscular Dystrophy.  The strength and pride Ashley demonstrated in her short life remains an inspiration to me as I face new challenges.

The way down was a bit tricky due to the rain and eventual snow. Sherry and I were lowered using my rope as well as Alan’s and Kevin’s ropes. Our protection skills came in handy.

Once down on the flats, the weather worsened and the blowing snow started. We made it down just before noon, wet and tired, but really happy. Sherry’s teeth were chattering as we downed some much appreciated hot chocolate.