The Olympic Games were held in Athens, Greece, this past summer and I was thrilled and privileged to be selected to the International Sports Massage Team that provided sports massage to the world’s best athletes.

The Olympic Games were held in Athens, Greece, this past summer and I was thrilled and privileged to be selected to the International Sports Massage Team that provided sports massage to the world’s best athletes.

Being a Certified Sport Massage Therapist through the Canadian Sports Massage Therapy Association with previous massage experience with Canada’s National Cycling Team, the Special Olympics, and Canada Summer Games, and the personal experience of once being a nationally ranked 5,000 metre runner all contributed to my selection to the Team. I’ve been practising for eight years and working at the Olympics has definitely been the highlight of my massage career. 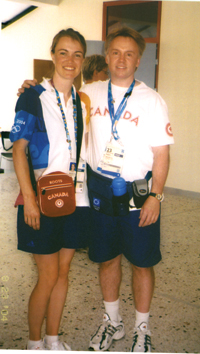 Our Team was comprised of 90 therapists selected from 18 different countries. It was great to work with so many great people with a vast array of techniques and philosophies. I worked at a massage clinic inside the Olympic Village which is the mini city the athletes reside in while at the Games. It is a zone that is completely free of the general public and all media – a place where the athletes can relax, be themselves, and call home. Over the course of my 18 days away, I did 42 massages which included athletes from 24 different countries and 18 different sports.

My work schedule fortunately afforded me some time to see many of the antiquities in and around Athens (such as the Parthenon on the Acropolis), and a day on the Greek Island of Hydra (which was truly like taking a step back in time, given that a donkey was the quickest transportation on the entire island!).

Greece is a very beautiful place, and did I mention HOT! It was between 35 and 40 degrees Celsius every day and very humid. That took some getting used to.

I took in three events as well: equestrian (jumping), track and field (including the women’s 5000 metre final while sitting only six rows from the track!) and men’s waterpolo.

It was fantastic to watch these athletes perform live, particularly some whom I had massaged earlier in the week. I’m still in disbelief at how they were able to perform in those extreme conditions.

I, at one time, had Olympic aspirations before the premature end of my competitive running career, and although it was not to be, I feel fortunate to have made it to the top of the sporting summit in a different capacity. 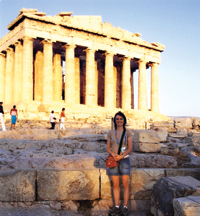 This was the first Summer Games in which massage therapy was fully integrated into the Health Care Services Team, and this inclusion demonstrates the heights to which the professional profile of massage has been elevated.

Being a member of this Team allowed me to both enhance the performances of top athletes and provide an education about what we do to those athletes, their coaches and trainers, and to the organizers of major games. This was truly a wonderful experience: I worked on some amazing athletes and made some good friends, too.

The therapists I worked with were great fun and I will continue to stay in touch with many of them. One of the nice things about being a massage therapist is that our skills can travel anywhere and can be applied in so many ways to all kinds of people.

I encourage my colleagues in massage therapy to seek out the experience that will make this profession uniquely your own.

Tracy McLaughlin, owner of Waterdown Massage Therapy in Waterdown, Ontario, was part of the International Sports Massage Team at the Olympic Games in Athens. Tracy is pictured above with the two other members of the Canadian Team, Garth Beddome, from Winnipeg and Connie Burton, from Maple Creek, Saskatchewan. On the facing page, Tracy is shown with her Olympic roommate Ui Eli, a sports massage therapist originally from Hawaii but now living in Los Angeles.
Print this page