A 40-year-old B.C. father who is facing inevitable blindness is looking to make a career shift to massage therapy and has started a crowdsourcing campaign to help pay for massage school. 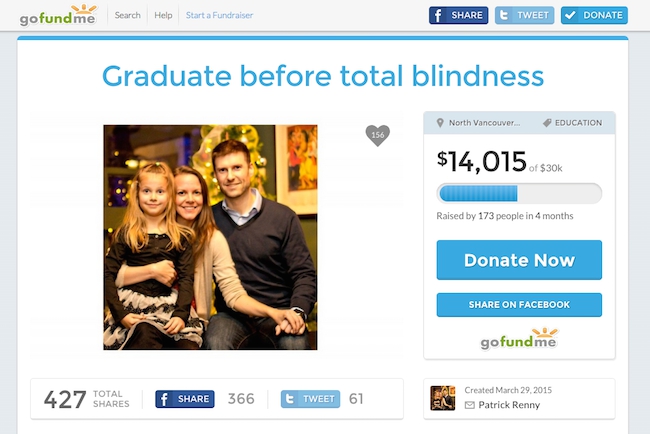 Patrick Renny from Vancouver, B.C., has choroideremia, a genetic eye condition among men that causes retinal degeneration that eventually leads to blindness. He recently started a page on GoFundMe, a fundraising website, to raise the money he needs for massage therapy school. He is looking to raise $30,000 to help pay for tuition, books and supplies.

“After doing research on jobs for the blind, I have been accepted to go to school while I can still read and become a registered massage therapist (RMT),” Renny wrote on his GoFundMe page.

According to an article in The Huffington Post, Renny was diagnosed with choroideremia when he was 13 years. He became legally blind in February.

Originally from Nova Scotia, Renny has worked in the hospitality industry since 1999, until he was laid off. His last job was at an IT company in North Vancouver. He was laid off again in February.

Renny has raised more than $14,000 since he started his GoFundMe page – almost halfway through his goal of $30,000. He said he plans to share 10 per cent of the money he raises with the Foundation Fighting Blindness.

To help Renny pay for massage therapy school, make a donation to his GoFundMe page.