Memories of last year’s devastating forest fires in and around Kelowna, Barriere and elsewhere in the southern interior of British Columbia will smoulder for years.

Memories of last year’s devastating forest fires in and around Kelowna, Barriere and elsewhere in the southern interior of British Columbia will smoulder for years.

The damage was hard to fathom. The 260-square-kilometre McLure-Barriere fire north of Kamloops, which forced thousands from their homes, destroyed the village of Louis Creek. And, the shocking images of the towering Okanagan Mountain Park fire torching treetops and Kelowna homes circled the world. Kelowna, a city known more for its wineries and orchards, was forced to evacuate 30,000 people, or almost one-third of its residents at the peak of the crisis. 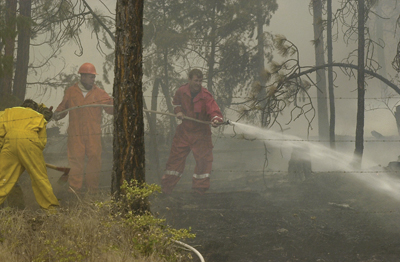 The fire destroyed 234 Kelowna-area homes and burned over 25,300 hectares of forest. Sparked by an August 16 lightning strike, the inferno consumed more houses than any other Canadian wildfire. Many residents, in addition to the threat of evacuation and home loss, have said they will long remember the grey-white smoke in the air, the eerie orange glow on the southeast horizon at night, the constant sirens and the clatter and whir of water-laden aircraft reminiscent of a war zone.

All told, over 600 firefighters, 250 bulldozers, two-dozen choppers and water bombers fought the firestorms.

And, the Kelowna-area Registered Massage Therapists played no small role in the monumental community effort to back the men and women fighting on the front lines.

Matthew Longman, RMT, was instrumental in rallying the area’s registered massage therapists to help their community.

“I returned from my honeymoon the day the Okanagan Mountain Park fire started. By Friday, the fire had spread into the city of Kelowna and you could see the massive firestorm from my backyard,” he said. “Everyone in town was feeling really helpless and I knew I had to help somehow,” added Longman, who had lots of community experience working athletic events, like the local marathons, triathlons and the Dragon Boat Festival.

Matthew contacted the fire crew to see if they were interested in support from massage therapists. Thinking along the same lines, the Massage Therapists’ Association of B.C. also called Matthew to suggest that he co-ordinate a team. “Saturday morning, I went down to the fire hall and volunteer co-ordination centre to see what I could arrange. By noon, I had set up a massage area at the fire hall and was phoning massage therapists all over the Valley to ask them to come down and donate their time.” 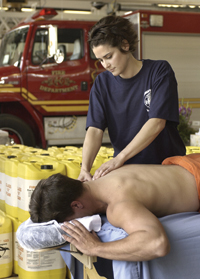 “My professional association in Vancouver called me and asked if I could set something up in Cranbrook,” said Valerie Harris, RMT. “Finding volunteer massage therapists didn’t seem to be a problem. It was a real grassroots effort.”

John Reimer, an RMT from the Vancouver area, joined forces with Matthew Longman and Valerie Harris in heading the MTA’s emergency response teams. They organized supplies, locations and support for the RMTs volunteering their services.

“I was impressed by how B.C. massage therapists pitched in. We had RMTs from as far away as Armstrong and Vancouver volunteering their time at the fire hall and the volunteer co-ordination centre,” said Longman.

Other therapists came all the way from Calgary to help out. Students learning the massage therapy craft at the Okanagan Valley College of Massage Therapy in Vernon also lent a helping hand, treating firefighters in other parts of Kelowna.

At the peak, there were as many as 20 massage therapists working to help firefighters, who were putting in 18-hour shifts in the forest.

“We were dealing with a lot of very exhausted and beat-up fire crews,” said Longman, who put in more than 60 hours of volunteer time in the first week, in addition to his regular practice hours.

Other therapists donated from 10 to 35 hours of their time per week. Many worked from early morning until after midnight providing care.

Most of the injuries were sprains, contusions, lower back and arch problems, a result of carrying hoses and heavy equipment while working on mountain slopes in very hot, dangerous situations.

“Those firefighters were taking a tremendous physical toll,” explained Sandra Coldwell, then president of the Massage Therapists’ Association of B.C. RMTs on site were also telling her that they were seeing people experiencing severe muscle strains, hypertension, stress and fatigue.

“Our RMTs helped relieve some of the physical pain and reduced the high levels of stress they experienced, helping to keep them on the front lines,” said Coldwell.

“Those men and women were working to save lives and communities and we did everything we could to help them succeed.”

And, help them they did. 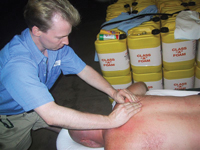 “A lot of firemen were flabbergasted at the relief we were able to provide them,” said Longman, while adding that many of the fire crews had never experienced treatment from a registered massage therapist.

“We made a big difference in their recovery time and many were coming back for treatment every shift.”

The MTABC continued to co-ordinate their team as the fires closed in. Special T-shirts were made to better identify the RMTs working in the fire halls and volunteer centres.

One-page case history forms were also distributed to ensure the RMTs were meeting their regulatory and insurance obligations.

The impact the RMTs made with the fire crews rippled through the community. Newspaper headlines like “Local massage therapists help ease aching backs” and “Massage therapists still needed” underscored the importance of their efforts.

By the time the fires died down in September, with the help of less wind and several days of rain, the RMTs of B.C. had donated more than $40,000 in services to the cause.

In early October, representatives of the MTABC went to the Okanagan to join the community tribute to the firefighters and volunteers. “We are all very proud. I think our efforts went a long way in enhancing the reputation and awareness of massage therapy in the Okanagan,” said Longman.

Given forest fires are a seasonal concern, the MTABC is currently working with the provincial director of emergency services to develop a procedural plan to ensure that the RMT Emergency Response Team
can respond appropriately and in co-ordination with other services to any future crisis in B.C.

Of course, no one looks forward to a crisis like the blazes of 2003, but if help is required, the RMTs of B.C. have no doubt let it be known they are skilled, professional and willing to stand up and contribute in any way they can.