Canadian certified sport massage therapist Aurel Hamran planned his vacation to Hungary in July. What he was not planning for was a call from the Hungarian Swimming Federation by Fodor Szabolcs, leader of the open water department. Szabolcs asked him to help their swim team as a full member at the FINA 2017 Aquatic World Championships, in Hungary. He didn't hesitate, and accepted the invitation. 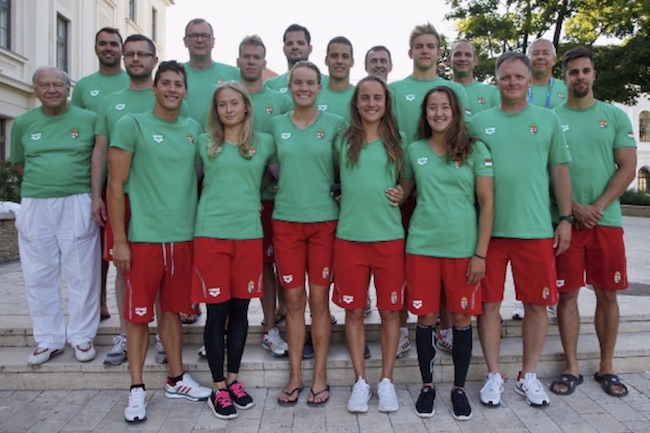 Being born and raised in Hungary, Hamran is fluent in that language and had no problem fitting in with the team. He had to be at Balatonfüred by July 12th, three days before the 10-day competition started, to meet and get to know the four women and four men on the team with their coaches and support staff. Balatonfüred is one of the famous vacation towns of Lake Balaton, the largest lake in Central and East Europe.

Amran related his experience: “Our accommodation was at the glamorous Anna Grand Hotel for all teams. You may guess how busy and loud the restaurant was when many of the teams were together. Needless to say, the Canadian team was very surprised to see me there – in Hungarian team attire. Massages took place in my large room, usually in the afternoons and evenings. Every afternoon team meeting was throughout the 10 days and in the morning on non-competition days training in one of the town’s indoor pools.

To get to the fenced race area, we had to go through the security gates where the bags were x-rayed and accreditation ID cards were scanned. Sometimes we noticed heavy police and army presence around the area, but no incidents.”

It is also important for the therapists to know how to apply the waterproof, greasy ointments around the edges of the swimmer’s shoulder, armpits, chest and back area to help avoid skin rashes, or abrasions. All these activities take time, Hamran said. Often, swimmers were called to get immediately to the adjacent “ready tent” for last-minute race instructions and regulations.

When the race started, boats with officials, judges and emergency personnel followed the swimming group on both sides all the way to the finish line. Others on boards were paddling along the way, so the last swimmers can be taken care of, in case they experience difficulties.

There were “feeding stations” on elevated platforms along the course, where coaches were holding cups on long sticks, offering water to swimmers, who were turning over on their backs to take a few sips, then continue swimming. Some racers won’t stop at all at these stations, except during longer races, as they didn’t want to lose their position and time.

Thousands of spectators from the tribune followed the races on huge screens, cheering for the swimmers and crews when they reached their area.

“I think the 25-km is strictly brutal. It is hard to imagine for a recreational swimmer that someone can swim that distance without stopping and still staying above the water,” Hamran said.

The organizers and volunteers were praised by participants and spectators, impressed with the beautifully arranged environment and the smooth operation of the competitions. You could hear comments, like, “I’ve never attended a better displayed and organized competition, ever.”

The weather was perfect for the 10 days with beautiful blue skies. Interestingly, after the last day of the competition the rain took over as if it was saying, “Now it is my turn,” Hamran said.

In all, Hamran said, it was a nice experience with many memories to be thankful for.