I met Lena Austin in May of 2004 at the International Symposium on the Science of Touch in Montreal, Quebec. Lena, accompanied by a group of delegates, were sharing stories and information about their amazing approach to facilitating massage for children by children. I was incredibly intrigued.

I met Lena Austin in May of 2004 at the International Symposium on the Science of Touch in Montreal, Quebec. Lena, accompanied by a group of delegates, were sharing stories and information about their amazing approach to facilitating massage for children by children. I was incredibly intrigued.

I took a few minutes to watch a video they were displaying. I found myself in a warm and soothed state when I left.

I have provided massage to children over the years within my practice and have found, without fail, that children under the age of five were surprisingly connected with their bodies and unconsciously understood the need for balance. Each time I finished massaging their backs they would either ask, or turn right over, and point to their tummies and say “now massage my tummy.”

With the unfortunate need for policies such as “zero tolerance,” and “no touching, at all” even within the apparent safety of the school setting, our children are being protected from negative touch and emotional danger.

It is a shame, however, that the long-term effect on society is that we clearly lack the experience of positive emotion and touch from those outside the family, or at all.

This is observed daily within the massage therapy profession. It is sad that some patients’ experience with touch has been more negative than positive.

I was so intrigued with the idea of children learning to give and receive positive touch, in the form of massage, to and from each other, that I asked Lena to share this approach with Canadian readers. This story comes to you from Sweden.

– Jill Rogers RMT,
Publisher MTC magazine
The Axelsons Gymnastiska Institut was founded in 1962 by Hans Axelsons. Hans continues to run the school today. We are presently one of the largest schools in the field of alternative medicine in the world. We have schools in Stockholm, Gothenburg and Malmö in Sweden and Oslo, Helsinki and Kopenhagen in the other Scandinavian countries. We have about 5000 students per year in our main school in Stockholm. We have a staff of approximately 100 teachers and 25 in administration.

My name is Lena Austin. I am the director of studies and I have worked for Hans Axelsons since 1982.
Until 1995, the focus for our school had been to train good therapists in the areas of Massage, Reflexology, Acupresssure, the Rosen Method, Aromatherapy, Chiropody, Connective Tissue massage, Energy massage, Horse  and Dog massage, SPA, Shiatsu, and a few others. We feel our school has continued to grow each year because of the high quality of the instruction that we provide.

In 1995 a few things happened causing us to change our focus. We continue with the instruction of courses previously listed, but we have added something very new and exciting.

We saw an article written by Prof. Kerstin-Uvnäs Moberg. She had done research on the hormone called Oxytocin. The study clearly indicated that when we get massage/touch, the level of Oxytocin increases in our bodies. Oxytocin is the hormone that makes you feel calm, relaxed and good. One other interesting thing was that she reported that the hormone has an amazing role in bonding people. Oxytocin is the mirror image of the stress hormone, adrenaline, which triggers the “fight or flight” systems in our bodies. We encouraged her to write a book about her research and she did. It is now translated into English and you can order it from: www.amazon.com. Author: Kerstin Uvnäs-Moberg. Title: The Oxytocin Factor. Publisher: Da Capo

We also got in touch with Tiffany Fields at the Touch Research Institute in Miami. We were influenced by all the fantastic studies they have done on the effects of massage.

We met a woman called Anne Eek who is a pre-school teacher and a naturopath. She told us that she had started giving small courses in her home to pre-school teachers. First for the teachers because they had tough jobs and had lots of muscle problems. But that led to that the pre-school teachers starting to give massage to the children. There were fantastic results.

The combination of these three events caused the staff at Axelons to spend a weekend talking about potential future plans for the school. Field’s and Uvnä’s work made us realize that perhaps the touch was the most important thing! Until then we had focused on muscle – and joint problems. We had, of course, noticed how people felt after they had had a massage and we had all experienced it  ourselves, but we had only thought that the effects of the touch was an extra side benefit from the actual treatment.

During our brainstorming weekend, Hans got the idea that we should spread the knowledge of the effects of human touch, especially to our younger generation, to possibly help to prevent violence and distress. The vision was born; Axelsons Gymnastic Institute leads the way to establishing peaceful touch as a natural part of society! We even added The School for Peaceful Touch  to our name.

Once we started focusing on the vision, things fell into place. We started off by creating a Peaceful Touch course. It is based on Swedish massage. It is a touch-technique that involves massage on different parts of the body,
combined with different healthy touch games. One of our goals is to share the importance of touch and how it affects the body and mind.

The course is for teachers, both in pre- and elementary schools. It includes learning how to give a massage,
how to teach children to massage each other and how to integrate massage into the daily routines. We teach the concept that; touch is the first sense we develop and that it is extremely important for communication and learning.

We also stress very strongly that the child should always be asked if they would like a massage and where on the body they would like it. Some days the child might say ‘no,’ and that it is okay and is important that they are in control of whether or not they are touched.

The massage should always be on the child’s terms. A child will then learn to say no to any other kind of touch that is not okay for them.

The Peaceful Touch course trains people to become instructors. We contacted therapists, who had done their training at Axelsons and who also had experience with children. We trained them to organize courses and how they should market these courses.

With their help, we have now trained over 10,000 teachers throughout the country. Every day we hear from the pre-schools and schools.

Here is an example of how it could be done in a pre-school: The blinds are drawn and mats, blankets, pacifiers and stuffed toys are brought out. The little ones toddle into the resting room from their lunch, following a bathroom visit. They find their own mats and lie down on their tummies. The teacher puts on some soft piano music and lights the candle in an aromatherapy diffuser. She sits down between two children quietly and carefully. She asks softly, “Would you like a massage?” If the children indicate that they would, she puts some lotion into her hands and starts to stroke their backs. The atmosphere in the room is calm and the only sounds you hear are the music, some coughs and occasionally some contented sucking on a pacifier. When she has finished with the childrens’ backs, she massages their heads. After about five minutes, the first children are fast asleep and she moves on. 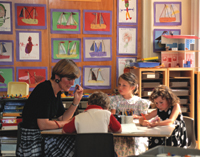 There are two teachers in the room and they give the children as much time as they need to fall asleep. For some it goes quite quickly, while others wriggle around and find it more difficult to relax, but finally their eyes close and even the most active ones go off to sleep.

A mother called me the other day to tell me about her son. The boy had started in a pre-school where massage was a part of the daily routine. When he was asked if he wanted to have massage he said no, and that was okay. He sat in the room and watched while the other children were massaged.

Being a little overweight had made it difficult for this boy to feel included in past group settings. After a couple of weeks, a little girl who was waiting for her turn to be massaged asked the boy if he would massage her back. He said “yes,” and did it so well, that, from then on, the girl only wanted massage from him, not from the teachers.

All of the other children started requesting him for their massage. So, from then on, he was the group’s masseur and that meant that he was also included in the group. This changed him completely and he is now a very happy little boy.

Prof. Uvnäs-Moberg, together with another professor and Axelsons conducted a research study on pre-school children. The study involved over 100 young children and proved that with massage, the youngsters became more calm and more socially mature.

After only three months, the halfway point of the study, parents and staff members noticed that the childrens’ behaviour was less aggressive. At the end of six months, there was no doubt at all that the children who received massage had changed for the better. They interacted better with their classmates and had fewer physical complaints at home. After nine months, a follow-up study showed that the effects were not only still evident but had become more pronounced.

Interestingly, the children who responded best to the massage were the most disruptive boys, whose behaviour during the study became less aggressive and more socially acceptable than that of comparable children who did not receive massage.

Among other things that this study clearly showed was that with massage:

In our modern society, stress has become a serious problem. The tempo has accelerated and we notice that we are always short of time. We communicate more and more using technology and machines. Our childrens’ natural play is being replaced by sitting in front of TV, videogames and computers. We must not forget that everyone needs both physical and psychological contact with other people. Peaceful touch gives nourishment to both the giver and the receiver.