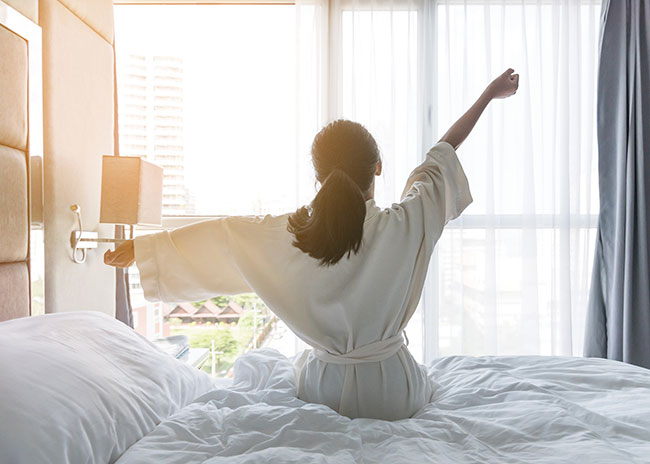 In a new study, participants underwent an intense bout of exercise after both normal sleep and after three nights of curtailed sleep. When they exercised after curtailed sleep, the levels of the heart injury biomarker troponin increased slightly more, compared with when the participants performed exercise in their well-rested condition. The study is a smaller pilot study and it is not yet possible to determine if the findings may be of relevance for cardiovascular health. The study is published in the journal Molecular Metabolism.

Previous epidemiological studies have demonstrated that, at the population level, chronically disrupted and shortened sleep increases the risk of several cardiovascular diseases, such as high blood pressure and myocardial infarction. In contrast, physical exercise can reduce the risk of cardiovascular disease. However, it has been unknown whether controlled sleep restriction can modulate cardiac stress during strenuous exercise.

“Exercise is great for the heart, while lack of sleep can adversely impact the cardiovascular system. But it has been unknown whether shortened sleep can modulate the physiologic stress that intense exercise seems to have on the cells of the heart,” says Jonathan Cedernaes, physician and associate professor of medical cell biology at Uppsala University, who led the study.

A specific type of the protein troponin is found in the heart’s muscle cells. Low amounts of troponin can be released after high-intensity training. Levels of troponin are routinely determined in the clinic, as significantly higher levels are seen in the setting of acute cardiovascular events.

“Higher blood levels of troponin after exercise have been linked to a relative increased prospective risk of cardiovascular diseases. It is not really known what the mechanism is, but at the same time, we know that one’s cardiovascular health is modulated through an interplay of lifestyle factors. We therefore thought it would be important to investigate whether the release of troponin during exercise can be affected by sleep restriction. One reason is the fact that many occupations entail work that disrupts sleep, such as for healthcare workers,” says Cedernaes.

“Those who report exercising on a regular basis, but get less sleep than the ideal amount, still reduce their risk of dying from cardiovascular disease. At the same time, we know that chronic or recurrent sleep disruption is bad for cardiovascular health. It is therefore possible that a more pronounced lack of sleep in the long run can increase the relative risk that the heart is injured in some way by more intense exercise. But many individuals experience a temporary lack of sleep, and the need for sleep is also very individual,” Cedernaes points out. “The epidemiological evidence related to disturbed sleep per se, applies primarily to chronic lack of sleep and long-term shift work, and are seen when averaging at the population level.”

16 young men, healthy and normal-weight, underwent the study. All were extensively screened for previous cardiovascular disease, as well as for heredity for such conditions. In addition, all participants had normal sleeping habits within the recommended range — that is, they reported getting 7-9 hours of sleep on a regular basis.

The participants were monitored in a sleep laboratory, where their meal and activity schedules were standardized. In one of the two sessions, participants got a normal amount of sleep, three nights in a row. During their other session, the participants were kept awake for half the nights, three nights in a row. On each occasion, blood samples were taken in the evening and in the morning. After both sleep interventions, blood samples were also taken on the last day, both before and after a 30-min-long intense stationary cycling session.

The researchers measured two biomarkers in the blood samples. NT-proBNP reflects the load on the heart. The second protein, troponin, is commonly used as a marker of cardiac injury. The results showed that the levels of NT-proBNP increased in response to exercise, but this increase did not differ depending on the amount of sleep. Blood levels of troponin also increased after the workout. However, for troponin, the increase after exercise was almost 40% higher after three nights of partial sleep restriction, compared with after three nights of normal sleep.

“An important observation was that the levels of troponin and NT-proBNP were not elevated in response to sleep restriction at any time prior to the workout. It is possible that lack of sleep may instead lower the threshold at which an increased exercise load results in measurable stress in heart muscle cells, as may occur in response to strenuous exercise,” says Cedernaes. “However, we noted that the increase in circulating troponin levels following exercise was variable across individuals. Previous research under resting conditions has also hinted at such variability, and it would be interesting to uncover the mechanisms.”

“Today there is no evidence to suggest that it would be harmful to the heart if you exercise regularly when you have slept too little. One can instead turn the argument around: by ensuring that one gets enough sleep, one may further increase the positive impact of physical exercise. While we know that high-intensity training generally has benefits in the long run, our results may be worth considering and exploring in specific groups of individuals. Examples include athletes and the military. These groups may be required to perform at extreme physical levels even under conditions of curtailed sleep. It may be good to further consider the importance of sleep in these contexts, especially as we also know that improving sleep can also improve one’s performance, both cognitively and physically.”

One limitation of the current study was that only 16 individuals were included. The study should be considered as a pilot study that requires further validation and follow up. Such studies are also needed to examine if these changes also apply to other age groups or women.