Advancements in technology and research have expanded our knowledge… 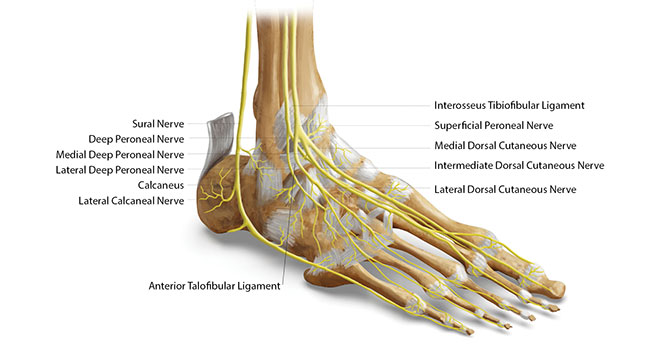 Neurological Innervations for the Ankle and Foot, Reprinted with permission from Ligament Pain Referral Patterns: A Resource to Supplement Your Practice, by Robert Libbey, RMT, 2020. Ligamentpain.com

Advancements in technology and research have expanded our knowledge and understanding of the different types of pain, including referred pain and the contributing factors that influence pain perception. Pain is multidimensional. It impacts all aspects of our lives and is influenced by all inputs from our environment. Today we understand that pain is an amalgamated expression of three important underlying components—physical, psychological, and social. These components of pain integrate with each other as well as the patient’s social environment to produce the final notion of pain for the patient. This gives rise to the biopsychosocial model of pain.

But pain is not just limited to these three components. Stilwell & Harman’s (2019) enactive approach supplements and builds on the biopsychosocial model. The enactive approach conceptualizes pain as a “5 E” model: pain is embodied, embedded, enacted, emotive, and extended. This approach to pain is an alternative big-picture framework. The perspective is that pain does not reside in an immaterial mind, nor is it entirely located in any other tissues. Instead, it is a relational and emergent process of sense-making through a lived body that is inseparable from the world that we shape and that shapes us. With this perspective, the experience of pain cannot be observed or measured, and qualitative pain description continues to be the best available alternative for inferring pain in our patients.

Typically, when discussing the topic of pain, a distinction between nociception and pain needs to be understood. Nociception involves the stimulation of nerves that convey information to the brain about actual or potential tissue damage (thermal, mechanical, or chemical). Pain is the subjective perception that results from the transduction, transmission, and modulation of sensory information.

Ligaments, joint capsules, labra, and menisci, like many other connective tissues, are innervated with both sensory and sympathetic nerves. Research has documented the specific nerve roots, nerves and specific ligamentous joint tissues that are innervated in the axial and peripheral skeleton.

Nerve-specific staining methods used in immunohistochemical studies confirm that ligaments, joint capsules, labra, and menisci contain not only proprioceptive sensory fibers but also nociceptive sensory fibers. The brain, in its attempt to protect us, takes in this information and ultimately decides what type of and how much sensation or pain we will feel.

Patients with joint tissue injuries causing instability of a joint or segment may comment on tightness, guarding, feelings of giving way, heaviness, loss of kinesthetic awareness, problems with balance and fatigue at the site. They may also comment on sensations of a deep, dull ache that is nauseating, boring, cramp-like, or similar to delayed muscle soreness. The area of the injury can get more sensitive and the brain gets better at protecting and producing pain. The brain unfortunately thinks that pain is a good thing, causing the sensation to persist long after the pain’s usefulness. For whatever reason, the brain, nerves, muscles, immune system, and endocrine system all stay sensitized, making it easier to feel pain.

Research confirms that ligamentous articular tissues (sensory organs) have a rich mechanoreceptor and peripheral nerve supply that is capable of providing not only proprioceptive information but provides constant nociceptive sensory information and reproducible referral patterns.

How injury happens
We’ve all experienced this. You “roll” your ankle, essentially sprain/straining it and suddenly all the muscles in your lower leg and thigh tighten up. Sometimes it diminishes but sometimes it stays and you start to notice that generally there is a tightness that is not only present in your leg and thigh, but now you also feel it in your glutes and lower back. What’s going on here?

When a ligament is subjected to an abnormally large amount of stress suddenly or to prolonged excessive forces, its fibrous bands may give way, resulting in discontinuity that is known as ligament tear. 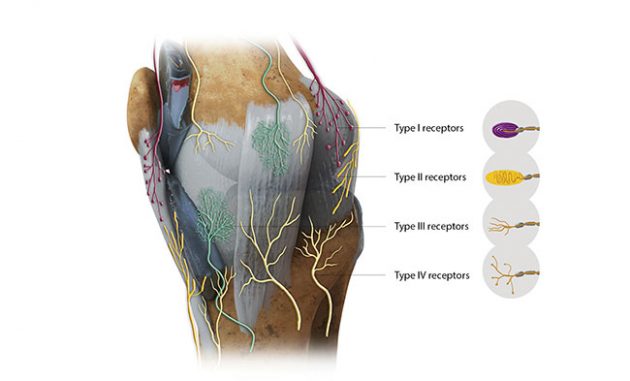 There are several ways in which a ligament could get injured:

Injuries can happen abruptly, as in the case of an ankle inversion event, repetitively, or they may occur slowly over a lifetime as with postural changes or diseases such as arthritis. Injury causes both structural and physiological changes in the ligament. Under normal circumstances, the body attempts to heal itself after the injury. The acute event can have dysfunctional ramifications that are immediate and recognizable, while the long-term dysfunctional influences may be more difficult to perceive. The healing process of the ligament consists of three main stages: the acute inflammatory phase, the proliferative phase, and the remodeling phase. 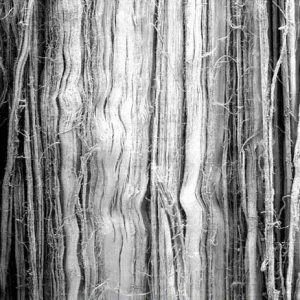 Left: Scanning electron micrographs of a normal rat medial collateral ligament with the majority of collagenous fibers aligned along the main axis of the ligament at 250X. 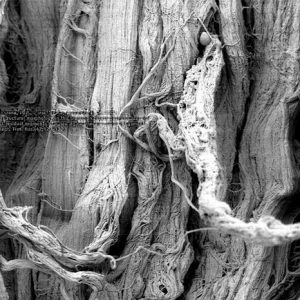 Although the remodeled ligament resembles the normal ligament in appearance, certain differences exist that may affect proper functioning. Some of these key differences are the following:

Ligamentomuscular Reflex
Sensory receptors in ligaments allow the initiation of a protective reflex known as the ligamentomuscular reflex. This reflex has been shown to exist in the joints of the extremities and spine and has been shown to supplement supraspinal control (monosynaptic and polysynaptic reflexes) (Kiely & Collins, 2016). The ligamentomuscular reflex is activated by load or tension on the ligament, which causes ligament stretching. The sensory impulse travels from the mechanoreceptors located within the ligament through the afferent pathway to relay in the dorsal horn of the spinal cord. The efferent pathway then activates the muscles that are involved in stabilizing the joint.

Neuroplastic Influences
When a ligament develops laxity, it essentially becomes “loose.” It can, therefore, no longer provide adequate stability to the joint and the protective mechanism is lost.Ligament laxity play a part in chronic neuromuscular adaptations due in part to a loss of effective messaging from mechanoreceptors to the CNS (Solomonow & Krogsgaard, 2001; Melnyk et al., 2007; Needle et al., 2014; Solomonow, 2009; van der Wal, 2009). 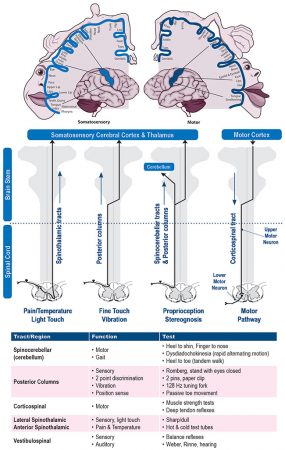 Fascial Effects
Patients with chronic pain tend to have a greater fascial thickness and stiffness. Imbalances in the regulation of the fascial stiffness mechanism has been shown to result in increased or decreased myofascial tonus, or diminished neuromuscular coordination, which are key contributors to the pathomechanisms of several musculoskeletal pathologies and pain syndromes.

Armouring Protection
This protective state (ligamentomuscular reflex, neuroplastic changes and chronic fascial stiffness) can be seen as an armouring of the body (Reich, 1972, 1973). This armoured body is defined as the experience-dependent development of a protective shell of muscle tension developed chronically in response to a history of threat, anxiety and trauma. Characteristics of the armoured body protective state include but are not limited to pain, muscle weakness, joint instability, stiffness in coordination of the segments of the body, reduced postural repertoire, inhibited respiration, and diminished perception of what goes on in the body.

Patients with joint tissue injuries causing instability of a joint or segment may comment on tightness, guarding, feelings of giving way, heaviness, loss of kinesthetic awareness, problems with balance, and fatigue at the site. They may also comment on sensations of a deep, dull ache that is nauseating, boring, cramp-like, or similar to delayed muscle soreness. The area of the injury can get more sensitive and the brain gets better at protecting and producing pain. The brain unfortunately thinks that pain is a good thing, causing the sensation to persist long after the pain’s usefulness. For whatever reason, the brain, nerves, muscles, immune system, and endocrine system all stay sensitized, making it easier to feel pain. Ligamentous joint tissue injuries should be seen as both connective tissue and neuropsychophysiological dysfunctions. 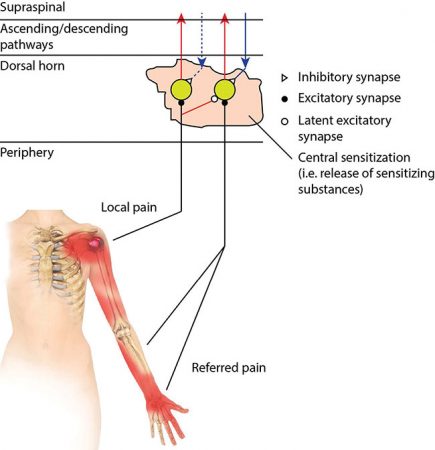 So how does referred pain occur? In his paper Fundamentals of muscle pain, referred pain, and deep tissue hyperalgesia, Professor Graven-Neilsen outlines the process along with the seven key features of referred pain, below.

Injury from either a mechanical, chemical or thermal stimulus causes nociceptive activity to excite the first dorsal horn neuron(s). Latent collateral synaptic connections are then opened and either excite the neighboring neurons or facilitate the synaptic afferent input from the referred pain area, both causing the perception of referred pain, i.e. central sensitization. The time needed for this sensitization to occur may account for the delay between perceiving the local pain and then perceiving the distal, deeper
referred pain.

A possible explanation for the progressive inhibition of referred pain is that the descending inhibitory control mechanism (de-sensitization) features a relatively stronger inhibition on heterogeneous somatosensory structures than the source of pain.

Research has documented the ligament pain referral patterns for the axial and appendicular skeleton. (Libbey, 2020)

Conclusion
Research on pain and our understanding of the role that ligamentous, capsular, and articular injuries play in chronic pain management have expanded considerably over the last few decades. Nevertheless, there is much room for improvement in our understanding and in our implementation of this information into clinical practice.

Robert libbey has been a Registered Massage Therapist (RMT) in Canada for over 25 years. He has been a Senior Clinical Examiner instructing Orthopaedic and Neurological Examination, and teaches Ligamentous Articular Strain Techniques (LAST) at international conferences and online. and maintains a full-time practice. Robert has a passion to advance and improve manual therapy education, encouraging innovation in manual skills and inspiring therapists to incorporate research into practice to better serve their community.