I have always felt that the sacroiliac joints have been given short shrift in the curriculums of massage therapy schools. Hence, it is not surprising that in our practice we run into difficulties treating sacroiliac dysfunctions and quickly get hung up designing effective treatment plans for those clients.

I have always felt that the sacroiliac joints have been given short shrift in the curriculums of massage therapy schools. Hence, it is not surprising that in our practice we run into difficulties treating sacroiliac dysfunctions and quickly get hung up designing effective treatment plans for those clients.

All too often we are either referring clients out to chiropractors to take care of these dysfunctions, or we leave the problem unaffected and the client suffers from recurrent pain. There is little doubt that when clients come into our clinic with low back pain, at least one-third of these (conservatively) have varying degrees of sacroiliac joint (S.I. joint.) involvement in their pain and dysfunction. If there are conditions of the lower extremities that lead to leg length differences, such as a unilateral tibial rotation or an anterior rotated innominate/ilium, then the resulting hip imbalance puts torsions through the sacroiliac joints that predispose the client to sacroiliac joint problems. 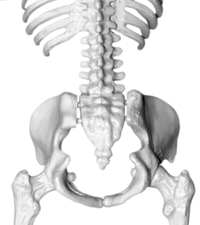 Alternately, from above, lifting techniques, especially when accompanied with a twisting of the upper body, injures not only truck muscles and the spine, but can sublux the sacroiliac joints as well.

We need to bring an understanding of the biomechanics of the sacroiliac joints, and the soft tissues directly and indirectly involved with the joints into our profession’s list of competencies.

The teaching of a proper biomechanical anatomy of the S.I. and assessment skills of the sacroiliac joints should be mandatory in our curriculum. I am using the term biomechanics here, not as a measure per se of forces and vectors in a mathematical model of joints, but rather, how the joints move.

How ligaments, for example, guide motions within the joint and do not just stabilize joints. Without this we will continue to do less for our clients than we could, and we will literally be giving away business to other health professions because we are devoid of a competency in assessment, which leads to inadequate treatments for sacroiliac joints.

The “scope of practice” in Ontario claims that we can treat and assess soft tissues and joints of the body, but we fail to live up to this with respect to the sacroiliac joint, and to the pelvis as a whole. The evaluation
of the sacroiliac joint’s various lesions, along with the concomitant pubic symphysis shears and rotations,
and lumbar scoliosis, helps us to understand and interpret the various muscle imbalances that we may
find in and around the pelvis.

Further, the type of hypomobility lesions (‘subluxation’) of the sacroiliac joint, (and there are a number of these), each present specific patterns of muscle imbalance.

And, part of this pattern is the resultant hyper/hypomobility of other joints, or their resultant mal-alignment and eventual dysfunction.

The clearest example of the later state is when a client comes in with pain in and around the left sacroiliac joint. This pain can be due to the inflammation of the left sacroiliac joint’s ligaments and spasming of overworked muscles trying to stabilize and protect (‘splinting’) around this joint. This situation can respond to treatment of the joint, but the problem re-occurs over and over.

What can be going on is that the left joint is suffering from hypermobility as it compensates for hypomobility of the right joint! The problem will keep re-occurring until the right (relatively painless) hypomobile joint is restored to its appropriate motion.1

Further, the lumbar spine becomes dysfunctional and prone to injury (either suddenly or gradually) as
the vertebrae of the lumbar spine undergo rotation and side-bending (“rotoscoliosis”) as they compensate for the un-level sacral base that results from most sacroiliac lesions.

The resultant muscle spasming-shorting and the concomitant lengthen-weakening of muscles around the sacroiliac and iliosacral lesions can also result in other joints’ dysfunctioning. And, don’t let me even get started on what can happen at the hip!

The muscles most obviously affected are the piriformis, gluteals, quadratus lumborum, lumbar multifidi, and the hamstrings. Antagonist and synergists are also affected: psoas, abdominals, quadriceps, and tensor fascia lata, to name a few.

Then, there are the resultant smaller muscles of the spine, and the muscles that make up the ‘pelvic diaphragm.’

For example, the QL and the piriformis may be hypertonic, short and tender on the same side of the body, or on opposite sides. This can be so dependent on whether a sacroiliac joint is being held fixed with:

This fixing of the joints involved can, as for all joints, be fixed by dysfunctional or injured muscles (some tight and short), and with hypermobile joints due to inhibited muscles (stretch weakness – long and weak). Or, the joint may be ‘stuck’ or ‘subluxed’ due to a dysfunction intrinsic to the joint: an inflamed joint capsule, or from a true subluxation of joint surfaces, etc. Or by some combination of both muscle and joint, which is the usual situation.

We have not even mentioned the potential neurological implications of sacroiliac dysfunctions.

It is not uncommon, for example, to find a reduced Deep Tendon Reflex of S2, the Achilles tendon reflex, on the affected side. If the decreased reflex is due to a sacroiliac joint dysfunction then the reflex will return to normal, as compared bilaterally, when the joint is mobilized. Further, there is suspicion that sacroiliac dysfunctions with their concomitant rotations of the ilium could be involved in rectal, urological or gynaecological symptoms or dysfunctions. This may be due to either creating muscle imbalances in the pelvic floor muscles that would have consequences for those structures involved, or by affecting the sacral parasympathetic nerves that innervate these structures.ii

Are the biomechanics of the sacroiliac joints and the possible dysfunctions complicated? Yes! However, the point here is that even though the biomechanics of sacral joints may be complicated, not to mention theoretical, none the less if we understand how these joints function and dysfunction, we will be able to make a great deal more sense of what we find in the low back, pelvis and hips with respect to pain, muscle tone and joint dysfunctions.

The better we understand the anatomy the easier it is to think through this anatomy and thereby be able to competently and efficiently assess this area of the body.

With this knowledge we are then equipped to bring all our skills and techniques to bear and be efficient and effective with our treatments.

Note: Some techniques may be better than others, but even with basic Swedish techniques effective treatments can be accomplished. There need not be only one way to adequately treat this area and its dysfunctions.

Knowledge and understanding, along with the “necessity” of assisting our client in healing, is the mother
of invention. If we understand the nature of the impairments and realize what is possible for massage modalities or special techniques to accomplish (the “aims of treatment”) then we can create an efficient and effective treatment plan. Along the way we will invent or modify techniques to treat the lesions found, thereby adding to our profession.

Massage therapists need not necessarily refer out patients with sacral dysfunctions, nor do they need to become physiotherapists, orthopaedic physicians, chiropractors or osteopaths. Massage therapy can bring its own perspective to the host of problems associated with sacral and pelvic dysfunctions.

Just as they learn from each other and build upon that understanding to develop their own manner of treatment, so too can we.