Evidence suggests that myofascial release is an effective technique for a number of injuries. However, when it comes to anything fascia-related, the professional community is divided with fundamentalist views on both sides. Some therapists approach myofascial release as a panacea, while others regard fascia as ‘dead tissue’ with no clinical significance. 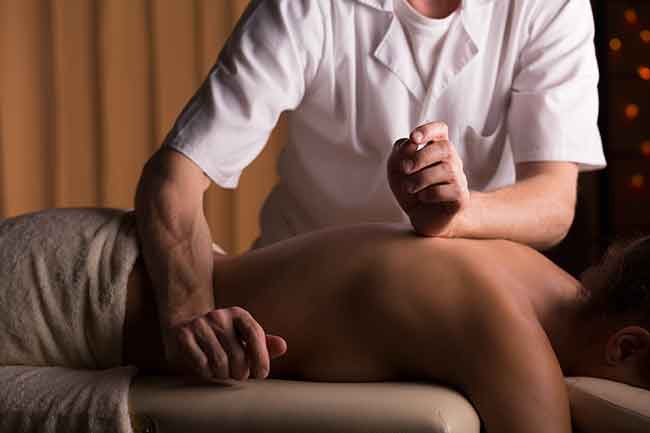 Evidence suggests that myofascial release is an effective technique for a number of injuries.

Fascial revival
Andreas Vesalius is considered to be the first anatomist and is best remembered for publishing the famous anatomy text, De humani corporis fabrica in 1543. If you look at these early illustrations, they present the fascia and muscles as one continuous soft tissue structure. Fast forward to the 20th century, most of the textbooks that students study in massage therapy school omit fascial structures in order to depict muscles in a cleaner fashion.

Recently, there has been a resurgence of this “forgotten tissue” and anatomy textbooks have made an effort to include fascial structures in their depictions and descriptions. An example of this is The Functional Atlas of the Human Fascial System by Dr. Carla Stecco, an orthopaedic surgeon and a professor of human anatomy at the University of Padua in Italy – the same University that once employed Andreas Vesalius in the early 1500s.

What is fascia?
To better understand the possible actions of myofascial release, there is a need to clarify the definition of fascia and how it interacts with various other structures: muscles, nerves, vessels. “Fascia is fibrous collagenous tissue which are part of a body wide tensional force transmission system.” It is divided into superficial fascia, found immediately beneath the skin, and deep fascia, which envelops organs and tissues.

What effects does myofascial release have on the body?
The thing is, myofascial release is not well defined, and it is an umbrella term covering a wide variety of techniques. This includes osteopathic techniques, rolfing, structural integration, massage therapy, cupping and IASTM. Most of these treatments are a manual technique that tensions soft tissue structures and is accompanied by active or passive movement, to promote relative tissue motion that has the following effects on the body:

Contextual response – This is likely to play a role in any therapeutic intervention – the way we present ourselves and present our techniques has influence on the treatment. The magnitude of a response may be influenced by mood, expectation and conditioning.

Neurological response – Fascia is highly innervated by mechanoreceptors. This was documented by Robert Schleip in 2003. His article, “Fascial plasticity – a new neurobiological explanation,” is an easy-to-read two-part article laying out a possible neurological explanation for the beneficial effects of myofascial release. In short, manual therapy stimulates fascial mechanoreceptors, which may, in turn, trigger tonus changes in connected skeletal muscle fibres. These muscle tonus changes might then be felt by the therapist.

Mechanical response – There is a large amount of literature to support the idea that along with the neurological and contextual responses, massage therapy has a mechanical effect on the fascial system. A summary of the proposed mechanisms includes, but is not limited to, nitric oxide release, altered hyaluronic acid production, changes in the extracellular matrix, fibroblast response to shear force.

“Fascia and the autonomic nervous system appear to be intimately connected. A change in attitude in myofascial practitioners from a mechanical perspective toward an inclusion of the self-regulatory dynamics of the nervous system is suggested,” Schleip wrote in his article, “Fascial plasticity – a new neurobiological explanation.”

Improving ‘slide and glide’
The adage, “motion is lotion,” applies to the fascial system – a conceptual model to describe the interconnections of fascial tissues with joint capsules, nerves and intramuscular connective tissues. Traditionally, when soft tissue structures have a reduced ability to “slide and glide,” adhesions are blamed.

An alternative possible mechanism that may explain this palpable induration is a fascial densification. This densification of loose connective tissue appears to correspond to the reduction of sliding between deep fascial layers. This may be due to age, trauma or inflammation. It is postulated that this reduced ability to slide and glide may affect the microvascularization of neural tissue, resulting in the local release of neurogenic inflammation. Neurogenic inflammation may lead to a reduction in the firing threshold of local nociceptors.

Myofascial release is an effective treatment technique – the catch is that it may not work in the way some were taught. Myofascial release may have more to do with improving function of the global fascial net by improving the “slide and glide” between soft tissue interfaces. This view diverges from the once-held belief that myofascial release can be used to induce long term mechanical deformation of fascial tissue.

This knowledge may not necessarily change the way that you apply the technique, but it may change the way you communicate with therapists and patients. The name myofascial release is better used as an analogous term to describe a palpable change in tissue texture, that is likely due to many overlapping responses that include contextual, neurological and mechanical responses.

Richard Lebert, RMT, works at The Fowler Kennedy Sports Medicine Clinic at Western University in London, Ont. He has a professional interest in sports injuries and concussions. Lebert created and maintains The RMT Education Project (www.RMTedu.com), an evidence-based resource for massage therapists, chiropractors and physiotherapists. Follow Lebert on Twitter @AdaptiveTherapy