An abundance of fascia science and clinical understandings were featured at the Fourth International Fascia Research Congress, held last November in Boston. Following are some of the highlights from the fascia conference that I find worth sharing with fellow massage therapy professionals. 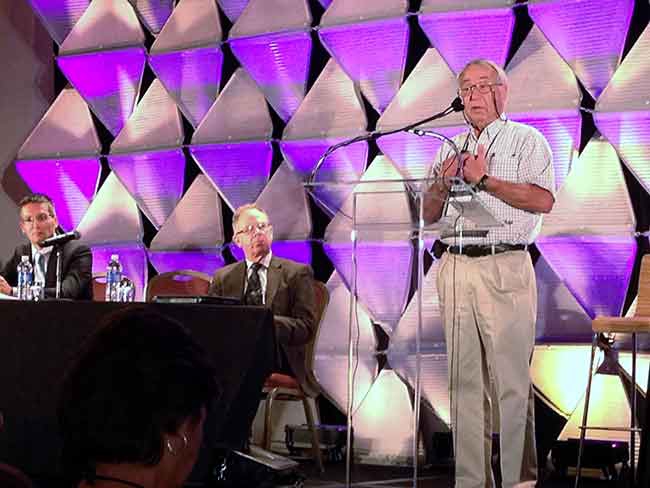 I have included the speakers for some of the topics discussed for references. Hopefully, you will find something here of translational value or causes you to reconsider a concept that continues to float without merit, like the mechanistic view of a body assembled of individual parts.

Anatomy consensus (Carla Stecco)
The folks responsible for the terminolgia anatomica – considered the international human anatomy standard – have invited a collective of fascia experts to submit a definition of fascia based on current understandings. Currently, two predominant perspectives prevail: one more clearly anatomical, favouring discernable/dissectible, fibrous presentations; the other more broad and functional, favouring fascia’s force transmission, sensory and wound healing functions. During questions, Gil Hedley put forth an impassioned plea for consideration of the 3-D, loose connective tissue (CT) found throughout the body. This evoked a wave of affirmative head-nodding from the clinicians in the crowd.

When it comes to defining fascia not all great minds agree. However, the general consensus is that fascia’s fundamental characteristics are its continuity and connectivity – three-dimensionally attaching, enclosing and separating all structures of the body from head to toe. Given its connective and continuous nature, one could surmise that if fascia is not happy, nobody’s happy.

Algesic agents injected deep into muscle belly and into fascia provoke notable differences. Fascial agitation elicits higher levels of pain and fascia also appears to process pain signals for a longer time and over a wider distribution than muscle.

Back pain
With acute and chronic low back pain (ChLBP), a lower pain threshold is more evident in fascia than in muscle. The outer (superficial) layer of the thoracolumbar fascia (TLF) houses a significant number of substance P fibres, which likely means that back pain may be mostly originating from superficial tissue – indicating lighter/gentler techniques for pain management. Additionally, endocannabinoid receptors in superficial fascia appear to be responsive to softer manipulations/touch.

Fascial micro-injury is implicated in ChLBP and may also play a role in the diminished TLF sliding seen (via ultrasonography) in ChLBP patients. In addition to biomechanical implications, reduced sliding appears to limit the functionality of the endocannabinoid system. Which is of concern as endocannabinoids are believed to better manage inflammation and pain information originating in the fascial system (Bordoni and Zanier 2014).

To clarify, the hallmark of fibrosis is aberrant collagen (a structural change), whereas densification is described as altered viscosity in sliding spaces (a non-structural change). As noted, both have functional implications.

Interoception (perception of our internal environment) is intimately linked to self-awareness. Due to its rich interoceptive innervation, Schleip suggests that fascia be considered our most important peripheral organ of self-awareness. Interoception plays a role in physiological and psychological health and therefore, challenges with interoceptive discrimination and difficulty interpreting internal signals pose several concerns.

Some health issues linked to malinteroception include: eating disorders, anxiety, depression and inflammatory bowel disease (IBD). Although nervous system responses to interoceptive or exteroceptive stressors in patients with IBD are not fully understood, autonomic dysregulation is implicated. Alteration in vagal colonic regulation appears to play an important role in the predominant bowel habit pattern in irritable bowel syndrome (IBS). Evidence shows that decreased cardiovagal tone is present in certain subsets of patients with IBS. Approaches that engage interoceptors include manual and movement therapies that foster integration, sense of self and body literacy.

Functional anatomy (Can Yucesoy)
Although it is difficult to fully appreciate the functional capacity of layers so intertwined and enmeshed, the various layers of fascia appear to display functional predominance: superficial is more exteroceptive, deep is more proprioceptive and epimysium is more involved in motor control. Yucesoy suggests that intramuscular fascia’s connection to and influence on the contraction elements of muscle can influence local force balance and determination of sarcomere length. This demonstrates that fascia not only supports muscle’s contractile apparatus but can also influence its functional output. Fascia and muscle are to be considered co-partners in force generation and transmission, endurance and efficiency.

Functional coupling
Sounds like the title of an interpersonal-relationship bestseller. This is about relationships, but of another sort. Andry Vleeming, professor in the department of rehabilitation and kinesiotherapy at Ghent Medical University in Belgium, provided an in-depth explanation of the role/relationship of the three functional rings (ribcage, pelvis and lumbar region) involved in the harmonious interplay of stability and mobility of the low back. As the lumbar area is naturally less stable (no bony ring) it is reliant on functional coupling of its muscular and fascial elements (deep abdominals, paraspinals, lateral raphe and TLF). The complex interactions between neighbouring tissues, a combination of muscle contraction, and multidirectional fascial stiffening/bracing forces, form an efficient and stable mechanism for movement and load lifting. To better understand low back pain, it is essential to appreciate how these elements cooperate to influence lumbopelvic stability.

In organs, fibrosis can lead to obstruction which poses a myriad of detrimental implications, as can fibrosis in other tissues. Since MFB activity is, in part, driven by tissue tension, can manually mediated reduction in tissue tension influence MFB activity in ways that reduce or prevent fibrosis and contracture? It appears that controlled, mechanical force applications can stimulate fibroblasts (precursor of MFBs and a major player in wound healing) in ways that degenerate or regenerate/reconstruct myofascial tissues, including loose CT. Better understanding of scar mechanobiology is key to developing productive scar prevention and treatment strategies.

Sports Medicine (Michael Kjaer)
Like defining fascia anatomy, tendinopathy consensus is contentious. What is agreed on? Overuse and repeat stress with insufficient rest/restoration time between agitations result in problematic collagen changes. Clear cellular differences are seen in healthy versus unhealthy tissue – but what tissue? This brings us to one bone of contention: changes appear to be more evident in interfascicular spaces (e.g. space between the tendon and paratenon). This leaves us to question what is tendinopathy and what ought to be our clinical focus? Is the primary issue a “rupture-healing” problem (Kjaer says no) or an interface/sliding problem? From a pain and functional perspective, best to pay attention to how sliding spaces can be preserved or restored following injury.