Ever wonder whether there’s another way of providing people the benefits of massage therapy without them having to leave home and just when they need it? Well, there’s an app for that. 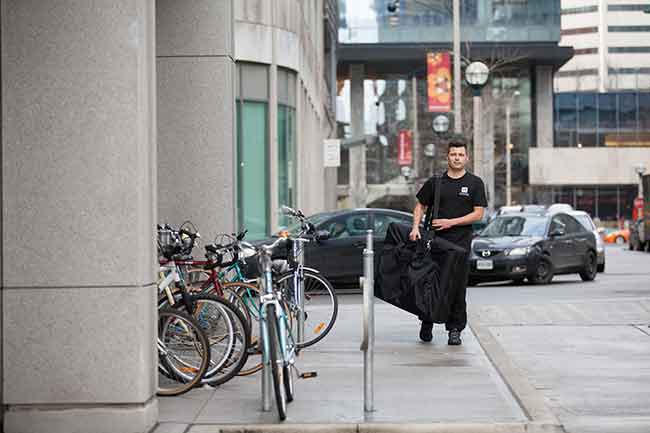 “People are busier than ever and they embrace and understand the value of wellness in their lives.” Ever wonder whether there’s another way of providing people the benefits of massage therapy

In June, the Canadian company behind the popular spa chain Sanctuary International Spas launched Massago, an on-demand service that allows clients to  book an appointment with a registered massage therapist, choose the type of massage they want, pay for it (tip included) with their credit card and get a receipt – all “through the convenience of an app on their mobile phone.” Massago, which has about 100 RMTs, is currently available only in the Greater Toronto Area.

Soothe, an on-demand service that began in Los Angeles in 2013, launched in Vancouver in October 2015, and is preparing to enter the GTA this fall.

Another American company, ZEEL Networks Inc., which has the copyright to “Massage on Demand,” soft-launched its service in December 2012 and is reportedly eyeing the Canadian market.

On-demand massage apps “meet the needs of today’s modern customers,” says Marcy Lerner, Zeel’s vice-president of communications. “People are busier than ever and they embrace and understand the value of wellness in their lives.” But, she says, they often find it hard to squeeze massage therapy into packed schedules. On-demand apps respond to this challenge by making massage therapy available typically from 8 a.m. to 10:30 p.m., 365 days a year.

The idea for Zeel was hatched in 2010-2011, when founder Samer Hamadeh and his team heard from clients that what they wanted most was a massage at home or in a hotel room, says Lerner. “Most often, they wanted a same-day massage, typically within hours.”

But back then, the massage therapy industry was “not prepared to accommodate last-minute, large-scale, in-home massage booking,” Lerner says.

Soothe was created out of founder Merlin Kauffman’s own desire to get massages at a time and place of his choosing, says Parisa Carello, the company’s recruiter and liaison in Ontario.

Allan Skok, Massago founder and CEO, says on-demand massage was a natural progression for Sanctuary Spas “because we’ve been turning and continue to turn so many people away in our brick-and-mortar location.”

Mobile massage therapy has been around for a while, mostly offered by solo practitioners who visited established clients wherever they may be, massage table and oil in hand. But many therapists are often reluctant to accept new clients without a reference or security check, says Lerner.

What on-demand massage apps have done is “add a layer of technology, which co-ordinates multiple massage therapists” and spares clients the tedious task of getting on the phone and getting an appointment with an operator, Skok says.

Safety first
All three companies claim they have systems in place to ensure the safety of both RMTs and clients.

“We interview all of our massage therapists in person and make sure they are degreed, licensed in their state of practice and up-to-date on their liability insurance,” says Lerner. Zeel partners with tech companies Experian and Jumio “to make sure we securely and rapidly verify the ID of our customers, so our massage therapists feel safe when travelling to customer homes.”

Asked whether someone has ever been blacklisted from Zeel, Lerner says, “We do remove customers on very rare occasions – customers who only want to pay in cash, who want to browse therapist photos, or who otherwise fundamentally misunderstand Zeel’s service offering.”

Because massage therapy is a regulated profession in Ontario, Massago only hires RMTs and they undergo an in-person interview and a practical evaluation, says Skok. They are required to provide three references, a police background check and must be in good standing with the College of Massage Therapists of Ontario (CMTO), which regulates the practice of massage therapy in the province.

Clients are required to create a profile in the app, which includes submitting a photograph, a government-issued ID and credit card information, says Skok. They also submit a photo of themselves – taken as a selfie via the Massago app – so that the therapist can see whether the picture matches the client’s profile on the app and the one at the door.

“RMTs are required to check in and out through their app, which allows our head office to track them. They are contacted immediately if they forget to check out,” Skok says.

Massago also has a live 24/7 call centre and a button in the app, which calls 911 in case of an emergency.  RMTs are not required to complete the service if they feel uncomfortable, “or start the service for that matter,” Skok says.

Soothe asks recruits to provide proof of insurance, an official ID and proof of certification with the CMTO, says Carello, who is also a RMT. They also undergo an interview process and a practical evaluation. Jeff Bishop, Soothe’s director of operations, says the company has a 24/7 dispatch support; therapists are required to check in and check out for every appointment.

Raisa Regozo, a Massago recruit who has been a RMT for nine years, says she’s satisfied with the company’s safety protocols. “They do facial recognition, a photo ID and selfie, and it goes to somebody who’s trained for fraud… They’ve set it up so that both clients and therapists are safe.”

In terms of remuneration, Massago, Soothe and Zeel all claim their massage therapists are paid higher than industry standards.

Zeel’s licensed massage therapists receive between 75 and 80 per cent of the price of the massage, says Lerner.

Massago therapists work as independent contractors and earn between $80 and $140 per massage, depending on the length of therapy provided, says Skok. Massago offers four types of massage: Swedish, deep tissue, sports and prenatal. Prices range from $109 for a 60-minute massage, $129 for 75 minutes, and $149 for 90 minutes, and a 15 per cent tip is added to the total.

“They’ve made it worth our while because travelling around the city isn’t cheap,” says Regozo, adding that the job allows her the flexibility to choose appointments. “You’re not on schedule and you’re not fulfilling any quotas.”

Tony Tran, another Massago recruit, says, “The pay is pretty fair, it’s better than in a clinic and the time is better.”

“People are busier than ever and they embrace and understand the value of wellness in their lives.”

Market player
As on-demand massage services enter the market, questions have been raised about what the so-called Uberization of massage therapy means for Canada’s approximately 26,000 massage therapists and how it will affect the market.

As long as their treatment standards are met, “then we don’t have a concern,” says Brenda Locke, executive director of the Vancouver-based Registered Massage Therapists’ Association of British Columbia. “Where we do have a concern is where it’s more of a spa environment for the client. We would consider some of those things cosmetic.”

Locke says RMTs must have the independence to work with the guidelines set by the regulator and not the company. They must direct the therapy and intervention and keep a record of the patient’s medical history.

Locke says the model of mobile massage therapy that she has seen grow in Vancouver involves RMTs who visit a seniors’ home, a hospice or a long-term care facility. As Canada’s population ages, Locke sees this as more useful because it makes health care accessible.

“This is not a spa service we’re talking about at all. This is very much patient care and dealing with health-care challenges that make people less mobile or not necessarily able to get to a clinic.”

RMT Noriko Ebata, proprietor of Otani Shiatsu Clinic, echoes Locke’s concern about safety. “I think it’s dangerous, for both women and men,” she says of massage on demand. The only time she ever made housecalls were for clients she already knew for years and were unable to leave their homes because of a disability or difficult pregnancy, says Ebata. “Massage therapy is intimate and you need to ensure there is respect from both sides.”

Ebata adds that RMTs need to be aware of the treatment protocols for each client, citing how she requires gravely-ill patients to get a clearance from their doctors before she agrees to treat them in hospitals.

Andrew Lewarne, executive director of the Registered Massage Therapists Association of Ontario (RMTAO), declined any comment, saying, “The massage apps and their impact are still being assessed.”

When asked to comment on this article, the CMTO declined to provide any statement as well.

Soothe’s Carello says she is “not overly concerned” about how the RMTAO or the CMTO might view the  on-demand RMT app model. She says she understands why the CMTO would not necessarily be open to communicating with the company. “Their mandate is to protect the public, and they wouldn’t get into any kind of a conversation with business providers.”

Soothe did try to approach the RMTAO for potential advertising for which the association reportedly declined, saying “they would not take on advertising from this business model,” Carello says. She adds it is “unfortunate,” and feels that RMTs are “not necessarily open to change and open to new ways of improving and expanding our practices…Technology is very important. We are, I think, sort of a bit stuck as a profession in doing things the old way.”

While on-demand massage app bookings have taken off in the U.S. (Zeel boasts a roster of 6,000-plus licensed massage therapists in 35 cities and metro areas). It’s too early to tell whether it will achieve the same level of popularity in Canada.

For Skok, the steep learning curve has been around supply and demand. “We don’t really have a yardstick yet coming into this space. We didn’t know how many therapists we needed to satisfy the GTA market,” he says. “We had to get up to speed very quickly because we don’t want appointments going unfulfilled and we also don’t want therapists complaining that they don’t have enough appointments.”

The signs are promising, says Skok, noting that 800 people have downloaded Massago’s app in two months after it has launched, and several have used the service multiple times. Still, Skok acknowledges that on-demand massage therapy isn’t for everybody.
Massago seems to appeal to a younger demographic of females born 1980-1985, he says. “That seems to be a our sweet spot… It’s too soon to tell, but certainly it is younger than what we’ve seen in our brick-and-mortar location. I think they’re just more comfortable using the technology.”

–  With files from Mari-Len De Guzman

——-
Marites Sison is a freelance journalist based in Toronto.