Antonio Martin was born on September 3, 1924 in Timmins Ontario. He graduated from St. Margaret’s College of Massage in St. Thomas Ontario in 1946. He’s been in practice ever since ... he has been registered with the CMTO since its beginning.

Antonio Martin was born on September 3, 1924 in Timmins Ontario. He graduated from St. Margaret’s College of Massage in St. Thomas Ontario in 1946. He’s been in practice ever since … he has been registered with the CMTO since its beginning.

Tony can’t recall how long the course was but he thinks it was approximately 24 months in length.

His father, David Martin II, did massage and bonesetting in Timmins and his business was so busy that he made Tony go and train in massage to help out the family practice! Tony’s grandmother (David’s mother) was also a bonesetter. 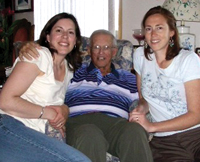 Advertisement
Antonio Martin shares a moment with two of his 35 grandchildren, Michelle (left) and Andree.

My grandpa said that he hated massage for the first year he was in business with his dad. He hated the lack of respect and recognition for his work. He felt lowest of the low in the health care field.

He said to me: “I felt so low that the medical profession had to lift the carpet to look at me.”

After about a year, he said he woke up one morning and realized he loved it, and was really good at his job and helping people.

He was making a real good living, earning more than the others in the health care profession because he and his father were very skilled at their job. His attitude changed when he stopped caring what the other
professionals in town thought. He focused on his patients and their problems and was very successful at his treatments. He can’t recall if there were any other massage therapists in Timmins at the time but if there were, they weren’t practising therapeutic massage, only relaxation massage.

Tony’s father, David, died in 1952 and he carried on the practice which continued to focus on therapeutic-based treatment, and remedial exercise. Later in the 1970s, two of Tony’s sons graduated from the chiropractic college in Toronto and they went back to Timmins to join the very successful Martin Clinic.

Tony had 11 children, three have passed away. His wife, Lois, passed away 13 years ago. He is remarried
to a wonderful woman named Nicole.

Tony has 35 grandchildren, and heaps of great-grandchildren, I’m not exactly sure how many! He spends his winters in Florida where he is also registered as an LMT and has a small practice with loyal patients.

Some of his kids and grandkids have followed in his footsteps – two massage therapists (myself included) and four chiropractors who strongly believe in their hands to heal, a gift from generations past.

At the age of 80, my grandfather is slowing down. But just a few weeks ago we traded off … both for our neck and shoulders.

Lately his daughter, Lozanne (masseuse) has been treating him everyday. He says it helps him and it can’t possibly hurt him.

He’s proud of the recognition that the profession has achieved so far. He feels it’s only going to get better. He feels if massage therapists are to be successful, they need to believe in themselves and their ability to help people. Stay within your scope, focus on the patient complaint, and treat it!

I am so proud of my grandpa.

His life is an amazing story; one dedicated to soft tissue massage and excellence in health care.

Thank you, Andree, for introducing your grandfather to us. Massage Therapy Canada magazine would like to take this opportunity to thank you Mr. Martin; for dedicating your life, sharing your gift and being a true inspiration to us all.
Print this page