How difficult could it be? Becoming the sole owner of a massage therapy clinic certainly makes monetary sense, but it’s easy to be overconfident about the responsibilities involved in pursuing such ‘independence.’ 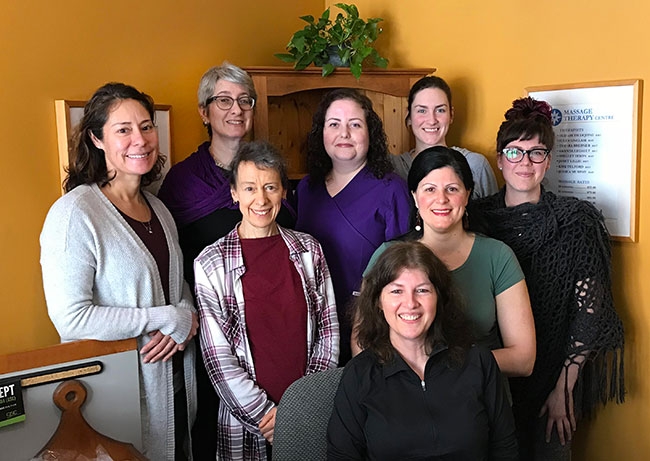 For Anne Anderson, becoming the owner of the Massage Therapy Centre in Old South London, Ont., was an unexpected career trajectory. As a home-based freelance graphic artist, Anderson missed having daily human interaction. Despite having no prior association with the massage therapy industry, she had a burgeoning desire to establish a business in Wortley Village, a community envied for its walkability, 19th century homes, cozy coffee houses, bistros, galleries and yoga studios.

In 2013 Wortley Village earned bragging rights as the Best Neighbourhood in the Country in the Great Places in Canada competition. Anderson thought she might open a store that catered to gardeners, but life spun full circle when her neighbour, Karen Vince, the owner of the Massage Therapy Centre, died of breast cancer in 1997.

“Karen was always a mentor to me, and here, 20 years later, she still has an impact on my life. We are still connected,” Anderson says.

Anderson had never had a massage before she ventured into this business, but there was serendipity in how it all unfolded. She initially co-owned the clinic with Vince’s partner, Jerry Crow, who she bought out 13 years ago. Now, she’s routinely turning away several people a day and attributes the clinic’s success to a cohesive team of nine therapists, three of whom were with Vince from the beginning.

The clinic numbers have nearly doubled in the last 10 years, too. In 2017, the clinic team treated over 5,200 clients – of which 792 were new clientele. Anderson reminds me that this journey wasn’t premeditated, and she attributes a shifting skill set to the clinic’s survival.

“Jerry provided an insightful business structure as a chartered accountant.” Indeed, when Anderson shows me her diligent spreadsheet tracking, Excel formulas and direct billing accounts, it’s obvious why the clinic is turning away clients every day.

For those who might be questioning the merit of a clinic owner who isn’t a massage therapist, Anderson sees it as a unique built-in support system. “In a sense, the therapists are pooling their resources and they’ve hired me to assist them in areas that they don’t have the time to address or interest in doing. They get to focus on their skills and clientele and do what they do best. I do the rest to help facilitate it.”

When asked how a massage therapist can prepare for clinic ownership she smiles wide, “Be prepared to do it all. You have to be a jack of all trades: bookkeeping, website construction, painting, vacuuming, shovelling snow.”

She emphasizes that people and financial skills, in tandem, are mandatory. “I read an article recently about how people don’t quit their jobs, they quit their boss.”

Whether you have employees or RMTs on a contract agreement like Anderson does, interpersonal skills are paramount. The most rewarding aspect of ownership for her is witnessing the individual successes and collective harmony of the team.

“It’s all about intuition, which I’m always fine-tuning. It’s so important to have the right group of therapists. It has to be a mutual fit,” she says.

When Anderson interviews therapists, “we are interviewing each other.” The therapists need to be congruent with the clinic’s vision. “I look for down-to-earth, genuine, warm, open and organized therapists.” In fact, “I like shyness too.” She explains that there’s a softer, natural, non-aggressive approach about introverts that shines in a one-on-one connection. We’ve all been to a pushy therapist who has been too bold about rebooking, but for Anderson, it’s the strong, silent types that see the return clientele without effort.

Anderson prides herself on both team and client retention. Her focus revolves around empowering the therapists. There are no restrictions on vacation time and the therapists design their own schedules. I’m visibly impressed.

So, if there’s a cancellation, or no-show, do the therapists have to remain at the clinic, or are they allowed to leave?

“Oh, they can leave! For sure, they can go do errands or grab a coffee. I would never expect them to stay and sit around. They decide how much they want to work. I don’t push them at all – I’d rather someone wasn’t overworked. If they only want two days or four hours a week, it’s the therapist that decides the base amount that they can handle. Some block in half hour breaks between clients, others want a three-hour block midday.”

The freedom she offers is attractive and rare. “Most of the therapists have multiple jobs. Some work out of their homes and other clinics, so they appreciate the flexibility in hours.”

The Massage Therapy Centre’s popularity clearly stems from the happiness level of the therapists. “There’s no client possession – there’s enough business for everyone.”

Therapists are required to have their own tables while Anderson supplies linen service, oils, a carefully curated soundtrack and extensive advertising. Generosity is extended to multiple fundraisers to support women’s community and sexual assault victims centres, MS and VON events. The equilibrium is found in this: consistent, personalized, quality service void of gimmicks.

Like any part of life, Anderson would warn would-be owners to be ready for expected and unexpected obstacles. Anderson reflects on past building issues, an unresponsive landlord and sewer replacement that resulted in her street being torn up for the duration of a summer as business disruptions that she had to shoulder. She recounts a Google Places account mix-up that had her clinic confused with a massage business down the road.

“We both benefitted and lost from the issue when our clinic was listed with the other clinic’s phone number and address and vice versa,” Anderson recalls.

She still believes in the power of intelligent advertising though, especially with Google, for top of the page exposure.

She shrugs and takes it all in a comfortable stride. She always returns to the purpose that existed from the beginning: the human element. With any business, it’s not about the credentials, but the client experience and team harmony.

It takes a village, and Wortley Village is lucky to have the sanctuary of Anne Anderson’s Massage Therapy Centre. She’s got your back.

Expect the Unexpected:
A checklist of typical clinic expenses

Jules torti, RMT, has been in practice since 1999 and a freelance writer since age six. In between massage engagements, she travels to Africa to be with chimpanzees and writes about her zany travels for Matador Network.
Print this page