While corresponding to the shoulder in terms of position and joint type, hip conditions and treatment differ from the shoulder. Both attach the extremity to the torso and both are ball and socket joints. However, beyond that, they differ profoundly. 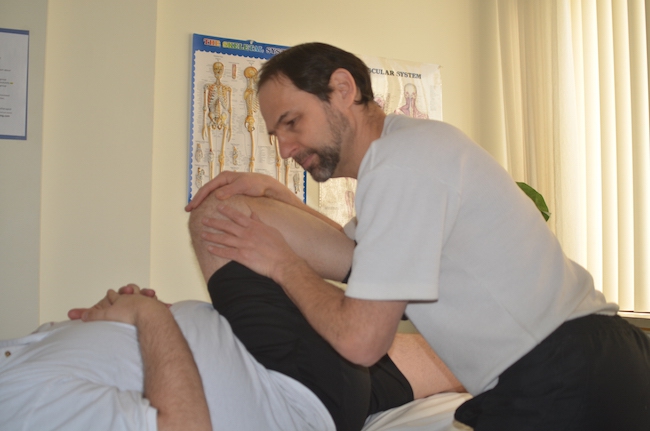 hip conditions and treatment differ from the shoulder

The hip is weight bearing with a deep ball and socket joint. The muscles and ligaments that surround it are strong and the joint is stable. Dislocations are rare. If they occur it is usually associated with motor vehicle accidents, where the flexed femur is violently thrust posteriorly as the knee is jammed against the dashboard. Muscle strains are common. Describing these in detail belong in another article since they are potentially complex, albeit interesting, topics.

Common hip conditions this article will address are trochanteric bursitis, impingement and arthritis.

Arthritis (in this instance osteoarthritis) is the “wear and tear” effect of inter alia advanced age, poor mechanics, physical trauma and congenital predisposition. Signs and symptoms include pain in the groin, thigh, buttock, hip, back and even pain referred to the knee. Pain with initial movement usually abates with motion as the consequent flow of synovial fluid nourishes the joint surfaces. Other complaints include decreased range of motion (ROM), joint stiffness and possibly a “crunching” sensation in the hip.

Hip impingement may mimic osteoarthritis in that it is also typified by loss of ROM and discomfort at certain ranges but may otherwise be symptomless. Contrary to what one might believe, joints are not fully congruent. Movement between the joint surfaces, known as accessory movements, actually augment the gross movement of the joint itself. The loss of accessory movement is the mechanical cause of impingement. All too often, well meaning therapists continuously stretch muscle in the futile hope that they will augment range of movement. In actual fact, the decreased range may be an articular phenomenon, the joint kinematics are not working properly. Whether one is assessing hip arthritis or impingement, in both instances a useful diagnostic tool is hip scouring.

Scouring involves passive movement of the hip by the therapist through all ranges emphasizing the periphery where the femoral margin impacts on the acetabulum. The therapist must note where pain occurs since treatment will be position-specific. One must also be mindful of the fact that the L2 and L3 scleratome, which innervates the hip, refers pain to the anterior and medial thigh. Resisted tests for the hip create pressures within the hip joint, which may prompt pain sensations in the thigh as described. Hence, the therapist can be misled into thinking it is a contractile injury. Scouring the joint, which is passive, will obviate this confusion.

Impingement
An invaluable treatment tool for impingement is hip mobilization. The significant change in range and comfort due to mobilizations will differentiate impingement from arthritis. Hence, it is also a useful assessment tool. This will indicate, if symptoms do not change, that further treatment is required directed at arthritis.

By doing distraction, and anterior and posterior mobilizations, you will reintroduce the accessory movements thereby normalizing the joint kinematics. With ball and socket joints, the convex surface slides along the concave surface, in the opposite direction of the joint’s movement, i.e. if the joint is rotating up, the convex surface is sliding down.

In these pictures you see distraction, and posterior glide, both done supine. With distraction it’s wise to have the tibia placed over your shoulder to facilitate using your body for leverage – particularly useful if your patient is bigger. Position prone for anterior glide. Ensure you have the hip slightly flexed to avoid closed packed position. Usually, up to six repetitions into high-grade mobilizations will suffice.

Arthritis
Arthritis is best treated with articular pumping, as taught by the French osteopath, Guy Voyer. This follows the premise of stimulating synovial fluid through a pumping action. As stated, movement stimulates synovial flow at the joint surfaces as the articular cartilage compresses and decompresses – hence, the decrease in symptoms with motion that patients describe. Articular pumping amplifies the compression and decompression effect tremendously, with the result being that the joint gets a mega dose of synovial fluid and nourishment.

With this technique, the patient does very gentle isometric contractions in a certain direction, e.g. hip flexion, but it may be necessary to include abduction, extension and adduction. Resistance is very light, merely enough to indent the pad of your securing fingers. The patient holds his/her breath for five seconds as they contract. The patient then exhales as the therapist distracts the joint for five seconds. A third five-second passive phase follows for both therapist and patient. Do at least four repetitions, though sometimes up to 20 may be necessary. For resolution, possibly include a host of positions to address the entire joint, e.g. deep flexion, adduction and abduction as illustrated in the pictures.

Trochanteric bursitis
Trochanteric bursitis presents as burning pain in the lateral pelvis. Inter alia wide pelvis, cambered walking/running surface, step/hill running, unequal leg length and an inominate positioning lesion (upslip, downslip, rotation) are all contributing factors. Significantly, and usually neglected, is the ilio tibial band (ITB) – the gluteal relationship. All too often, therapists focus on the ITB and neglect the gluteus maximus, which is the primary contractile component of this chain. The gluteus maximus is a powerful muscle that governs a myriad of thrusting, lunging movements typical of lower extremity sports and daily activities. Simply put, if the gluteus maximus is chronically restricted, the ITB constricts, which in turn rubs against various boney protuberances – the greater trochanter as well as the femoral lateral epicondyle (ITB friction syndrome) and tangentially will affect the patella femoral relationship (PFS syndrome) via the lateral patellar ligament /lateral vastus
transverse fibers.

A “tight ITB” is a misnomer. It is a tight gluteus maximus muscle that must be addressed. The tensor fasciae latae (TFL), while attaching to the ITB anteriorly, plays a less significant role. It is smaller and does not perform the same powerful closed chain movements of the gluteals.

Traditionally, the treatment of choice would be to stretch the gluteal muscles. The problem is the gluteals elicit movement over a single joint. It does not have the leverage of the hamstring, which – extending across two joints – allows one to use the hip and knee to maximize the stretch, as in a straight leg raise position.

Anecdotally, it is clear that the structure of the hip itself also limits flexion, with the femur approximating the acetabular labral lip likely before the gluteals experience any real stretch. A patient with a large abdomen further precludes a stretch into flexion.

Experienced therapists will note that, over time, chronically constricted muscles develop restricted fascia. Often it’s the status of this fascial tissue that determines how “tight” the muscle is.

To obviate the discussed shortcomings of stretching the glutes, direct fascial release of this muscle is a good alternative, especially since fascial work could be considered to result in a more permanent response on the tissue. By palpating the inferior posterior margin of the ITB, the therapist will have a good sense of the tissue’s restricted status.

Aside from the patient’s feedback, palpating the tissue before and after treatment is an ideal way of determining the success of the technique.

By engaging the elastic quality of the gluteal fascia, slowly challenge its plastic resistance and progress slowly laterally. The patient may feel a profound pull. However, as you persevere and the tissue releases, this sensation will abate.

Work at the speed the tissue allows. It’s a process, and takes patience and practice. Working slowly enables body fluids to disperse, and minimizes the possibility of bruising.

Although subsequent treatments may be necessary, the patient will feel the change after even one application. The therapist will note the change with the ITB in palpation as well.

Released gluteal fascia will result in an unrestricted ITB which then presses less on the greater trochanter. By the same token, this is an ideal modality to treat ITB Friction syndrome and plays a tangential role in treating PFS.

While these techniques are ideally explored in a hands-on teaching environment, this article aims to assist the therapist in understanding these conditions. It also introduces the reader to these practical modalities that treat these conditions successfully.

Jonathan Maister is a Canadian Certified Athletic Therapist, RMT and Sport Massage Therapist. Based in the Markham area, he has presented across Canada at numerous conferences of the RMTAO, CATA and CSMTA. He is a regular contributor to newsletters and publications in the Athletic Therapy and Massage Therapy profession. This article is an excerpt from a comprehensive workshop on treating hip pathologies. He may be contacted at jmtherapy@JonathanMaister.com.
Print this page