Geraldine Yaworski is married to Kevin, a Canadian, and they have two children, ages 5 and 3. The Yaworski family moved to England to work and travel.

Geraldine Yaworski is married to Kevin, a Canadian, and they have two children, ages 5 and 3. The Yaworski family moved to England to work and travel.

While in England, Geraldine qualified in massage therapy, but found the 10-month-long course was very basic. With plans to return to Canada, she researched the requirements to practice Massage Therapy in Canada. 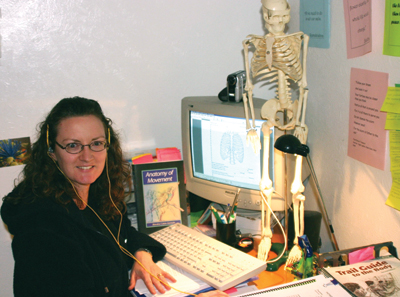 From her computer in England, Geraldine Yaworski took part in a trial run of an on-line course offered by the Wellington College of Remedial Massage Therapy in Winnipeg.
Advertisement

Geraldine approached Randy Ellingson at the Wellington College of Remedial Massage Therapy in Winnipeg. Randy had already considered developing an on-line course and offered Geraldine the opportunity to be involved in a trial run.

The needs of a long-distance student are comparable to the local students. Geraldine required a computer with MSN messenger (they found that V.7 works the best), a webcam (optional), a microphone, speakers and/or headphones and a printer, as she preferred hard copies of assignments and tests.

Geraldine used the same books as the in-class students and was given the same mini skeleton as was used in the classroom. It was helpful to have someone in the classroom with enough computer savvy to resolve computer problems as they arose.

Initially, Geraldine had some concerns. “When I read the course manual and saw how much work was required, yes I was a bit concerned,” she said. “However, at the same time I was excited about being able to complete some of the diploma from overseas. I was a little concerned about the time zone difference – it meant that I would have to be up and connected via the computer from 2-4 a.m. England time. This was where a supportive partner and family made all the difference.”

In the beginning, instructors were wired (literally) to the computer, which impacted their teaching style.

One of Randy’s urgent tasks was to find wireless microphones for the instructors. “I remember trying different styles of microphones because everyone assured me their type would work. Then one day I came across a microphone we used for our presenters at conferences. I thought what the heck I’ll give it a try. It worked perfectly.”

However, Geraldine was missing a great deal because she could not hear the student’s comments. “Sometimes out of a 10-minute conversation all I got was ‘mmmmm, is that right … oh wow, yes, yes, I see, great, ok let’s get back to it…’” This problem was solved with the use of a simple toy that allowed Geraldine to hear the students as well as the instructor.

Since then, the school has adopted a new microphone system that effectively transmits the voices of both the instructor and the students.

In the initial classes, the internet signal was frequently lost. This was solved by using a desk-top computer, instead of a laptop.

Another concern was the inability of the camera to pan the room. 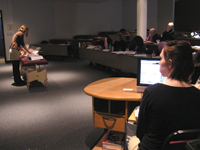 Thanks to the internet, Geraldine Yaworski was able to see and hear the instructor from the Wellington College of Remedial Massage Therapy in Winnipeg.

Geraldine said: “I find that the instructors move around the room and the current camera doesn’t follow them, so either I ended up looking at the overhead screen or a blank space in the room. When the instructor pointed to a particular bony landmark on the skeleton, I couldn’t see that detail. I also could not see if the instructor was demonstrating a stretch that the camera didn’t follow. These are the kinds of things we are currently working to improve.”

Randy is optimistic that, with the addition of a few gadgets, there will be a solution to the inability of the camera to pan on the instructor.

Randy attributes much of project’s success to support staff, including Student Liaison, Allison Murray, who ensured that the instructors submitted their handouts and exams in enough time to be forwarded to Geraldine before class. Allison also sat in on the class to monitor and address any problems with the system.

Geraldine got all her assignments by e-mail. Receiving and converting the exam papers into a compatible format was time-consuming and “patience” became a test in itself. Completed assignments were scanned or typed and e-mailed back to Allison at Wellington College. Outgoing tests and exams were e-mailed to an impartial school in England, where they were administered and mailed back to Wellington College.

It is a different atmosphere working on your own, Geraldine said. “I did miss the student interaction as I think it’s an important part of learning. You can begin to feel quite isolated from it all, especially because of the distance and time zone difference. This is when you have to reach out and make those connections with people.”

Geraldine got some support from fellow students by phone and MSN  and there were tutors available to answer questions by e-mail or phone.

“We still have a few kinks to work out … mostly procedures and finding ways to give students additional support,” said Randy. “I have an idea or two, such as on-line chat rooms, and possibly additional classes in the evenings, digitizing classes and having them accessible from our web.”

Randy has been contemplating this situation already. “Geraldine is planning to stay in England one more year. So to this point we have done the academic classes but, if she is willing, we are going to do the practical ones starting in the fall. It’s going to have its own challenges but we are already preparing.”

In conclusion, Geraldine says: “Yes I have had some frustrations, but I realize that this is part of getting the set-up right. I am the ‘guinea pig’ and I knew that it might be some time before we got everything working. However, at the last weekend almost everything worked perfectly and it meant that I was able to really concentrate on the learning. The instructors at Wellington College are amazing! They make learning fun! It’s the little extra learning tips that make it so much easier to remember the information. I had a copy of all the handouts and notes before class began, and the instructors checked in with me to see if I had any questions. Randy is a visionary – this is a great concept and one that I am sure there is a market for. I would like to thank all the staff at Wellington College, in particular Allison, Randy, Leanne and Angela for making this possible for me, and I look forward to perfecting this system so that many other people can gain the benefits that I have.”

Randy foresees a successful on-line course being run from Wellington College with one staff member dedicated to this project. This experience proved the long-distance education course is feasible and Randy is looking forward to providing training anywhere in the world.

“Already I am communicating with a research centre in England that works with children,” he said. “There is
so much that we can do – the only limitation is your imagination.”

Watch for more information and announcements about the long-distance program on Wellington College’s website, www.wellingtoncollege.com .