Pilot studies performed at Flinders University in Adelaide, Australia with Professor Neil Piller and Robert Harris of the Dr. Vodder School – North America using objective measuring tools have indicated that Manual Lymph Drainage (MLD) has a measurable effect on lymphoedema patients. The accepted method of treatment of lymphoedema (a protein-rich swelling caused by a problem within the lymph vessel system), is Combined Decongestive Therapy or CDT (Kasseroller, 1998, Petrek et. al. 1998). 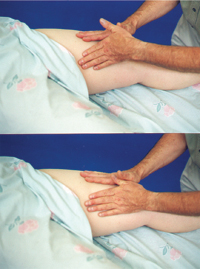 CDT involves the combination of MLD, Compression Therapy with bandages or garments, Exercise Therapy and Skin Care. However there has been little research performed on the individual components of CDT to identify their effectiveness (Ferla et. al. 1991; Johannsen et. al. 2000). The aim of these studies is to objectively determine the impact of one MLD session on compositional changes including limb hardness, fluid distribution, circumference and volumes. These are pilot studies leading to a larger clinical study. 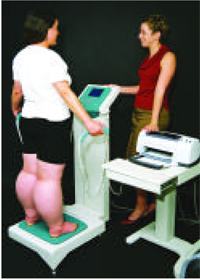 Perometry uses an infra-red, opto-electronic scanning device to accurately measure the volume of the limb at
3.7 mm intervals. (Insert picture of Perometer)

Bio-impedance determines intra and extracellular fluid levels in body compartments and is especially useful in measuring truncal edema. A small, multi-frequency electric current is passed through the body and the degree if
resistance is measured to determine fluid levels.

Patients were assessed upon entering the clinic, after a 20-30 minute rest period and then immediately after treatment. The arm lymphoedema patients were also measured at timed intervals following treatment. In addition a control study was performed to determine the effect of no treatment using the same measuring criteria for one of the patients with arm lymphoedema in the first study.

In the second study, qualitative subjective questioning was also included to assess the patient’s response to
treatment. Manual Lymph Drainage was performed by a certified therapist of the Dr. Vodder School according to standardized treatment protocols for lymphoedema patients (Kasseroller 1998, Wittlinger, 1998). Only one 45-minute treatment session was used on each patient.

Results
All three evaluation tools indicated a movement of fluid to different body compartments as well as a softening of tissues in some of the affected limbs. Results of the first study showed a significant volume reduction in the affected limbs after 45 minutes of MLD which was corroborated by both the Perometry and Bio-impedance findings.

The lymphoedematous legs lost an average of 140 ml. while the arm reduced to a maximum of 400 ml. below the pretreatment volume, 20 minutes after treatment had finished. Without compression bandaging to maintain the result, the arm started to refill after 20 minutes.

When fluid was moved out of the legs or arms, the Bioimpedance results showed a corresponding increase in fluid levels in the trunk. Fluid movements were also detected in the contralateral, apparently normal limbs, even though they were not treated. Tonometry results showed significant softening of the legs but no discernable changes in the arm lymphoedema patient.

In the second study, Bioimpedance and Perometry results showed an average 14 per cent reduction immediately after treatment which increased to 19 per cent, 30 minutes after cessation of treatment before beginning to refill. The untreated arms showed no significant change in volume. Tonometry results showed significant softening on the affected arms.

The qualitative subjective questioning of the patients revealed significant improvements in feelings of heaviness and perceived limb size after one 45-minute session. (The results of this second study have not yet been published but have been presented at the International Society of Lymphology Congress, Freiburg, Germany 2003)

There has been some discussion in the literature about the possibility that once one section of the body is affected by lymphoedema that other sections, particularly the contralateral limb are affected as well (Pecking et. al. 1983, Foeldi et. al. 1989).

The results of the first study support this hypothesis since improvements in extracellular fluid content and tissue softness was observed for each of the case studies in the contralateral as well as in the lymphoedematous limb (excepting the arm patient).

There was no significant change in fluid volume in the normal or affected arms during this rest period.

This study also shows a significant decrease in volume after treatment, and which continued reducing even after the hands-on MLD session had stopped.

Conclusion
In the first study, a single session of the Dr. Vodder method of MLD has been shown to have what appears to be a significant biological effect on the total fluid levels (mainly represented by extracellular fluids) in the massaged and affected lymphoedematous limbs.

A softening of the tissues in all of the major lymphatic territories was recorded. There were also reductions in the total fluid levels of the apparently normal, contralateral limb even though the MLD massage was not concentrated here. Post-MLD measurements demonstrated that there were concomitant increases in the total fluid content of the trunk area in both cases of leg lymphoedema and a slight increase in fluids in the arms.

In the second study, when a patient rests supine there is little fluid shift into or out of normal or lympho-edematous arms. Even a single session of MLD has been shown to be beneficial in moving fluids.

Assessment equipment such as tonometers, bio-impedance meters and perometers allow a clear picture of limb changes following an intervention such as MLD.

Qualitative subjective questioning can be used as an effective tool to demonstrate changes also. Without compression, it appears that fluid will return to the affected limb within 30 minutes of treatment.

Robert Harris, HND, RMT, CLT-LANA is a registered massage therapist
in British Columbia and Ontario, Canada.  He is the director and senior
instructor for the Dr. Vodder School-North America. He has worked in
immunological oncology research at the Max Plank Institute in Germany.
For further correspondence: rharris@vodderschool.com
Print this page