BEND, Ore. – Lower leg pain and injuries have long been a problem for runners, but research at Oregon State University-Cascades has shown that one type of running shoe may increase such risks for some runners. 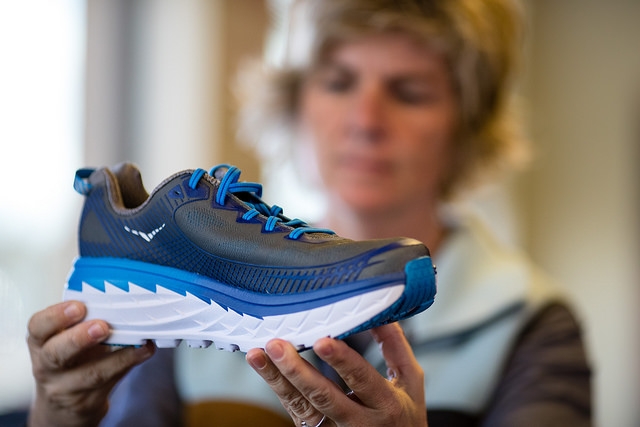 Researchers in the Functional Orthopedic Research Center of Excellence (FORCE) Lab compared the biomechanics associated with “maximal” and “neutral” running shoes in tests with 15 female runners. The study concluded that runners experienced a higher impact peak and increased loading rate with the “maximal” shoes. Increases in both factors are associated with a greater likelihood of injury, such as plantar fasciitis and tibial stress fractures.

Sign up for our once-weekly newsletter to get the latest research, news, and events sent straight to your inbox!

The study was published in The Orthopaedic Journal of Sports Medicine and is believed to be the first rigorous analysis of impacts associated with maximal shoes.

Maximal running shoes feature increased cushioning, particularly in the forefoot region of the midsole, and have gained popularity since being introduced in 2010. More than 20 varieties of maximal shoes are on the market.

In the FORCE Lab study, researchers evaluated the impacts on runners’ feet and legs before and after a simulated 5,000 meter (about 3 miles) run on a treadmill. Each subject wore a neutral running shoe (New Balance 880) for one test and then, after a seven to 10-day waiting period, repeated the procedure with a maximal shoe (Hoke One One Bondi 4). In each test, 3D movements and forces were measured by monitoring reflective markers placed on the runners’ shoes and legs and by having the subjects run over a “force plate” that recorded the forces being applied as the runner’s foot hit the surface.

“We were surprised by these results,” said Christine Pollard, director of the FORCE Lab and an associate professor of kinesiology. “We thought we would see the opposite. Typically, increased cushioning results in a reduction in the impact peak and loading rate of the vertical ground reaction force. We suspect that the large amount of cushioning across the entire midsole caused the runners to rely more on the shoe than on their own internal structures to attenuate these forces.”

The study also evaluated the degree of “peak eversion,” the outward turning of the foot, a factor associated with injury risk. The researchers found no difference between the maximal and neutral shoes.

The research is a first step in gathering evidence on the effects of maximal running shoes on runners’ injury risks, said Pollard, who is also a licensed physical therapist. Maximal shoes are becoming very popular, but without controlled studies, clinicians have been unable to make science-based recommendations to runners.

Pollard said she expects that a study with male runners might produce different results. “We know that gender differences in running biomechanics do exist,” she added.

Funds for the study came from Oregon State University-Cascades. The FORCE Lab specializes in studies aimed at preventing injuries to athletes. It is a partnership between OSU-Cascades, Therapeutic Associates-Bend Physical Therapy, The Center for Orthopedic and Neurosurgical Care and Research and The Center Foundation.