It's never too late to reap the benefits of exercise, and that includes older adults with arthritis and other muscle and joint conditions, according to a study. Researchers at Hospital for Special Surgery (HSS) found that a low-impact exercise program in senior centers in New York City's Chinatown and Flushing, Queens communities helped decrease pain, improve mobility and enhance quality of life for many participants. 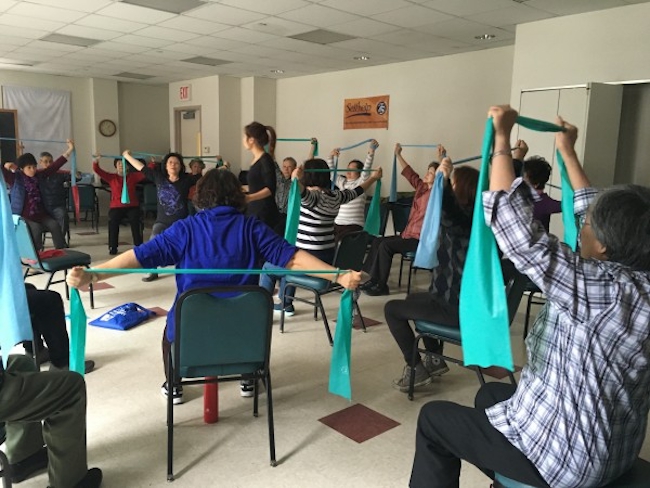 The study, titled, “Effects of a Culturally Tailored Low-Impact Exercise Program for Chinese Older Adults in NYC,” was presented at the American Public Health Association annual meeting on November 1 in Denver.

According to the Centers for Disease Control and Prevention, Asian seniors had the highest rate of physical inactivity (defined as no physical activity beyond basic daily life activities), 29 per cent of them lived in poverty, and 75 per cent had limited English language proficiency in 2012. In addition, Chinese Americans were less likely to seek health care because of cost and language and cultural barriers.

“Joints will often stiffen if not used, and muscles will weaken if not exercised. Our bodies are meant to move, and inactivity leads to weakness and stiffness, and joints with arthritis often worsen with inactivity,” said Dr. Theodore Fields, director, Rheumatology Faculty Practice Plan at HSS.

The exercise classes, which were free and open to community members, took place once a week for eight weeks. Participants performed chair and floor mat exercises using stretch bands and other gentle exercises. Certified bilingual instructors made the sessions culturally relevant by integrating Chinese breathing techniques and meditation into the program.

A survey was distributed to participants before the classes started and again after they ended to evaluate pain, physical function, stiffness, fatigue, balance and other health indicators. A total of 256 adults completed the questionnaires between September 2011 and June 2016. Ninety-three per cent of participants were female, and 73 per cent were between 60 and 79 years of age.

Participants also reported significant improvements in the ability to perform activities of daily living, such as lifting or carrying groceries, climbing stairs, bending, kneeling, stooping, bathing and getting dressed.

“The study results are consistent with the experience of rheumatologists and with prior studies showing that exercise, even of mild degree, helps with pain,” said Fields. “Getting people up and moving does appear to help with mood, pain and overall functioning.”

“Given the social and financial implications of musculoskeletal diseases, it is paramount to identify effective programs that reduce the impact of these debilitating conditions,” said Wu. “Our findings indicate that implementing a bilingual low-impact exercise program can play an important role in pain relief, improved quality of life and improved levels of physical activity in the underserved Chinese community.”

The classes are ongoing and have become so popular there is a waiting list.