Features Collaboration Practice
Naps are not the only 20-minute wonder

Professional athletes in the CFL make their living on their legs for 20 grueling weeks each regular season. Recovery is key, but downtime is slim to none, so training staff must constantly find new ways to help their athletes make the most of muscle recuperation. 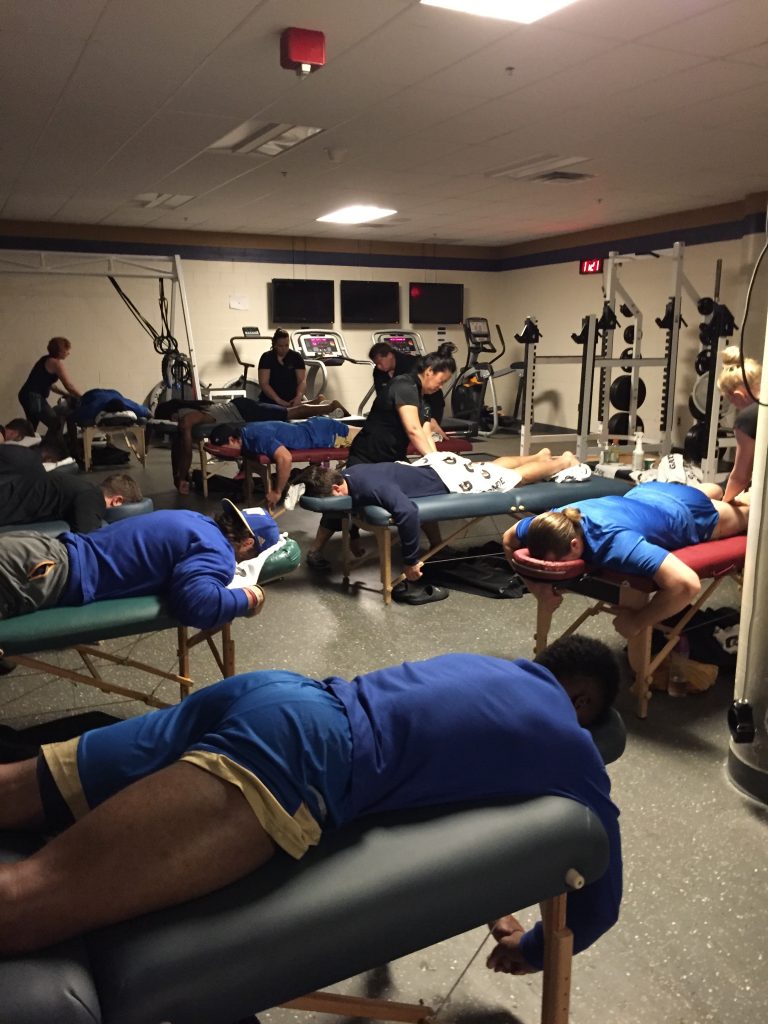 For Winnipeg Blue Bombers Head Athletic Therapist Alain Couture, this meant tapping into his expertise as a massage therapist at the start of the team’s 2016 campaign.

Couture, who’s spent 14 years with the team, contacted former massage therapy instructor Garth Beddome, who is owner of the Massage Therapy College of Manitoba (MTCM), for help with an idea: incorporating 20-minute leg massages into his players’ recovery day protocol.

“I’m always talking with my staff and head coach (Mike O’Shea) about the best ways to recover,” says Couture. “It’s a revolving door of ideas during the off-season. We always thought massage would be a great modality to use, but the logistics around it with 44 players involved were challenging.

“With help from Garth Beddome at MTCM, and the involvement of MTAM (Massage Therapy Association of Manitoba), we were able to work through those challenges and do what we thought was the best thing for our athletes – which was to include massage therapy and hydrotherapy together after a game.”

To help Couture, Beddome assembled a volunteer army of 40 therapists to work with the Blue and Gold from June 25 until the end of the season. During weekly recovery day sessions – which require players to rotate through three 20-minute stations of massage, thermo therapy and dynamic stretching – massage therapists asked them three questions: their number, how their legs feel on a scale of 1-10, and which station they were at before their massage.

At the end of the sessions, Couture recorded the data and throughout the week asked his players to again assess how their legs felt. Additionally, he incorporated different recovery day methods – for example, a 15-minute jog to get players’ legs moving and blood flowing – and then compared how they felt then to how they felt after massage.

The goals of the project, which is still ongoing, are twofold: for Couture and the Bombers organization to give their players every therapeutic option available to help them succeed on the field; and for Couture and Beddome to gauge the efficacy of massage as a post-game recovery aid.

When the team’s regular season wraps up, Couture and Beddome plan to use the data as the foundation for an informational article, as well as a research submission. While the outcomes of the investigation remain to be seen, there is no doubt in the Bomber locker room regarding the efficacy of massage as part of muscle recovery.

“Winnipeg’s post-game recovery is second to none,” says Bombers starting quarterback Matt Nichols. “I’m very thankful for the therapy staff for keeping me healthy this season. My day after and pre-game massages are a big reason for that. I absolutely love it.

“In this profession the faster you recover, the better chance you have to be successful,” Glenn says. “With that said, I feel like the recovery day massages play a big part in the relaxation and normalization of the tissues to rejuvenate and perform the following week…. [the Bombers are] the only team I know of that has adopted this system. It gives players a better opportunity to perform at a high level.”