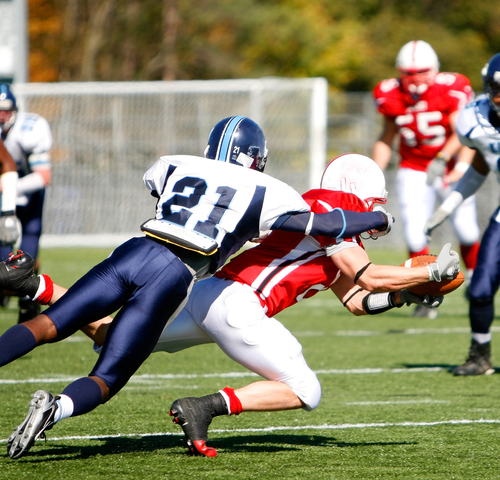 Aug. 22, 2013 — A degenerative brain disease linked to repetitive brain injuries, such as concussions in athletes, may initially affect people in one of two major ways: dramatically altering their behaviour and mood or impairing memory and thinking abilities, a study suggests.

That disease — chronic traumatic encephalopathy, or CTE — has been found in the brains of deceased professional and amateur athletes, members of the military injured by blasts during combat, and others who experienced repeated head trauma.

"CTE has only been found in individuals with repetitive brain trauma — concussions and subconcussive hits to the head," said Robert Stern, a professor of neurology and neurosurgery at the Boston University School of Medicine, who led the study.

"The disease is not injury. The brain trauma sets it off," said Stern, explaining that post-mortem examinations have shown there’s a progressive buildup of an abnormal protein in certain areas of the brain.

For the study, published online Wednesday in the journal Neurology, the research team looked at the brains of 36 male athletes, aged 17 to 98, and diagnosed with CTE after death.

Most had played amateur or professional football, while the rest had played hockey or were involved in wrestling or boxing. None of the subjects had other brain diseases, such as Alzheimer’s.

Researchers interviewed family members about the athletes, asking whether they had developed dementia, changes in thinking, memory, behaviour, mood or the ability to carry out tasks of everyday living. They also reviewed the athletes’ medical records.

Stern said 22 of the athletes exhibited behaviour and mood problems as their first symptoms of CTE, while 11 were initially bothered by memory and cognitive impairments.

Curiously, three of the athletes did not show any signs of CTE before their deaths, although the disease was present in their brains.

"The people with the behavioural and mood symptoms as their presenting problems started to show those problems at a younger age than the people who had the cognitive and memory problems, who presented their difficulties at a later age," Stern said from Boston.

For the mood-behaviour group, symptoms first appeared at age 35 on average, compared to an average age of 59 in the memory-cognitive group.

The study found that 91 per cent of those first affected by mood and behaviour changes eventually experienced memory and cognitive decline as well.

Those affected initially by alterations in mood were more emotionally explosive and depressed than those hit first by memory and thinking deficits, with family members reporting that 73 per cent in the first group were "explosive," compared to 27 per cent in the second group.

"The most common thing was having a short fuse," Stern said families reported. "The former athletes just blew up over little things and couldn’t control themselves. So they were described as being out of control.

"Sometimes that led to being incredibly rageful or verbally screaming or yelling, and occasionally in some people it included physical violence, either to one’s spouse or other people or they got into fights," he said.

"And in most of these cases, this type of behaviour was completely out of the blue, meaning they were only aggressive on the football field or hockey rink. It was out of character."

The researchers have no explanation as to why three of the subjects exhibited no symptoms, despite having evidence of CTE in their brains.

One was just 17 at death and his brain was in the first stages of disease; the other two were ex-football players aged 40- and 80-something, both with mild CTE on brain examination. Both had been highly educated and were successful businessmen.

The pair perhaps showed no symptoms because they might have had "cognitive reserve," Stern speculated.

"Some people have bigger and better brains than others and they have more reserve protecting them against the ravages of an underlying disease," he said. "We see that in Alzheimer’s disease, too. People with higher education… are more protected not from the disease, but from showing symptoms."

Dr. Charles Tator, a Toronto neurosurgeon who also studies CTE, said the detailed analysis by the Boston researchers is "good information to have," but it’s not clear how representative the sample of 36 subjects is of all professional and amateur athletes playing collision sports.

"What percentage of people are going to get this problem after they’ve had repeated concussions? That’s the big question mark," he said, adding that the study, by its nature, can’t answer that question.

"I think that this points out the fact that we are still at an early stage of coming to grips with what is this condition and who is it affecting," said Tator, whose team is studying the brains of a number of deceased CFL players.

Stern agreed that science is only in its infancy in understanding CTE, and he said the findings should be viewed with caution.

"There’s such hype about this disease that so many people are afraid that if they hit their head a bunch, they’re going to deteriorate and get dementia later. And if they have depression, then they might as well give up and they might as well take their lives — and some of them have," he said.

A number of pro football and hockey players, who had suffered repeated concussions and had symptoms suggestive of CTE, have committed suicide, including Canadian hockey enforcer Derek Boogaard, whose family is suing the NHL over his death two years ago at age 28.

Boogaard’s brain was donated to the Boston group and found to have CTE, but it’s not known whether he was a subject of this study — identities were not revealed for confidentiality reasons.

"What we don’t want to have happen is that people have so much fear that they make dreadful decisions," stressed Stern. "And no matter what, there are ways to treat some of the symptoms, whether they’re caused by CTE or not.

"So regardless of the underlying cause at this point, people have to be treated symptomatically and their symptoms have to be taken very seriously."