All too often joint mobilizations are dismissed as a modality worthy of being merely a footnote. During RMT schooling they are covered in techniques class. However, they are often relegated to the proverbial back pocket – to the therapist’s and patient’s detriment. 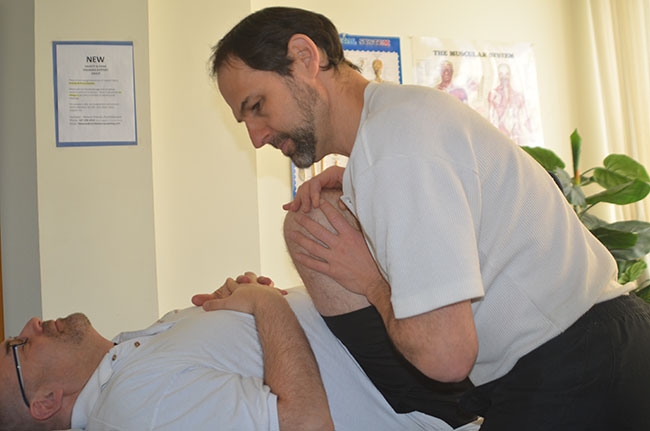 Scouring the hip involves the supine patient’s femur being moved through all ranges All too often joint mobilizations are dismissed as a modality worthy of being merely a footnote.

This should not be the case. Used correctly and in the appropriate circumstances, joint mobilizations may be the miracle method of changing the patient’s health status. Key to this is recognizing the indications and following through appropriately.

Joint mobilizations are purported to achieve a number of objectives:

My objective is to discuss joint mobilizations in a number of common scenarios where soft tissue work plays a role, but in the absence of articular work, success will be limited.

The body requires at least 10 degrees of dorsiflexion for normal ankle movement. In the absence of sufficient dorsiflexion, the fulcrum of the movement migrates anteriorly from the talocrural joint to the midfoot. Consequently, the arch collapses upward as the forefoot is forced superiorly in order to attain adequate dorsiflexion. Tissues spanning the arch, in particular the plantar fascia, are stressed, hence, the tearing and inflammatory response to the plantar fascia. Logic indicates manual soft tissue work to the triceps surae, and this would be absolutely correct. However, functional dorsiflexion of the talocrural joint also requires correct arthrokinematics between these bones.

Soft tissue work, regardless of how much, will ultimately have finite results. In order to maximize dorsiflexion, both the soft tissue and articular component must be addressed. In fact, it is true to say that limited range may indeed be the result purely of an articular deficiency, rather than soft tissue. By judging the increase in ankle dorsiflexion by doing the joint mobilization first, this may even obviate soft tissue work.

Talocrural mobilization requires a simple anterior drawer movement. Stabilize the tibia and fibula with one hand, and draw the calcaneus anteriorly. By repeating a few of these we are able to maximize the joint’s movement into dorsiflexion and amplify the effectiveness of the treatment for plantar fasciites. In this instance, we see how a standard special test protocol also doubles as a treatment modality.

By expanding this concept in an ankle sprain scenario, adhesions and residual edema from the injury may be compromising normal function of the ankle. The Anterior Drawer Test is one of the standard protocols for testing the anterior talo fibular ligament for injury. At the same time, as part of the treatment (at the appropriate stage of healing) it may be employed to help evacuate swelling and loosen the consequent adhesions.

Knee
The second instance we shall discuss is the knee. A common test to ascertain quadriceps flexibility, in particular the rectus femoris, is the Ely Test. For this, the patient is prone, the therapist passively flexes the knee and brings the patient’s foot as close as possible to the gluteals. The patient may feel discomfort or a pulling sensation in the quads (indicative of muscular resistance to further range) or pressure or discomfort in the knee – hence, an articular resistance. It is useful for the therapist to use their fist(s) between the heel and buttock to gauge distance and compare bilaterally.

Regardless of where the patient felt the sensation, if restricted range is a consideration, the therapist should still apply joint mobilization to the tibiofemoral joint. With the relaxed patient prone, grasp the proximal tibia, elicit light traction and gently shift it anteriorly and posteriorly into the resistance five or six times. The difference when retesting with Ely Test may be dramatic.

My commentary is this. With the knee, regardless of where the patient felt the resistance, there is invariably articular involvement. Because it may be symptomless, the patient and therapist may not be aware of it. Doing an Ely Test before and after will disclose beyond doubt that the joint mobilization was indicated. In fact, further comment would suggest that by using patient response alone (i.e. where they feel the sensation) can result in a false positive – that it is incorrectly assumed that the rectus femoris is primarily causing the restriction because that is where they feel the resistance. In fact, range of movement likely increases maximally after the joint mobilization.

It is still prudent to include massage and fascial work to the quadriceps, but not without including the articular component.

Hip
A procedure I commonly use to check hip status is known as “scouring the hip.” This involves the supine patient’s femur being moved through all ranges, particularly into the end ranges.

Once this has been determined, the therapist should then mobilize the hip. If possible, the therapist should raise the treatment table for this technique. Leaning into the supine patient’s hamstring of the flexed thigh, let the tibia lie over your shoulder and “hug” the thigh, preferably proximally to ensure superior leverage. Using your body for leverage, disengage the hip joint by pulling the thigh toward you. This elicits an inferior glide of the femoral cartilage. You may also adjust by shifting the femur laterally, hence including another direction.

Retest using the scouring motion. The range of movement should have increased, possibly the joint comfort as well, indicating a positive effect on the articular cartilage. There are modalities that are more suited to addressing articular cartilage, but if the patient is arthritic, joint mobilizations will help to a degree. However, the increase in range can be dramatic due to joint mobilizations.

Reduced hip flexion is unlikely a consequence of gluteal restriction. The anatomy of the gluteals clearly indicates that it’s a single joint muscle and built for power movement rather than significant changes in length. Soft tissue work to the gluteal musculature will reduce the resistance to hip flexion, but not change the range of movement since this is largely determined by the anatomy of the hip articulation.

From a practical standpoint, after mobilizations the patient is now able to perform greater hip flexion. To compensate prior to correction the patient may have had to tilt the pelvis posteriorly. This would have forced an upward forward tilt of the inferior pelvis thus allowing the femur greater reach superiorly. Clearly, this could potentially stress the lumbar spine, particularly if done regularly and with speed and momentum as with dancers or in certain sports. Clinically speaking, there’s the realization that hip mobilization in this scenario not only improves movement of the femur and the arthrokinematics of the humeral head and acetabulum, but also plays a role in lumbar health.

One final point in this: Joint mobilizations clearly allow greater surface contact of the respective articular surfaces that occur with normal movement. The gentle compression and decompression of articular cartilage with movement is what nurtures the flow of synovial fluid and hence healthier articular cartilage.

Ensuring that mobilizations are part of your therapy regimen will maximize the well-being of your patients in a myriad of ways.