Using olive or sunflower oil on newborn babies' skin damages the barrier which prevents water loss and blocks allergens and infections, new research led by The University of Manchester has found. 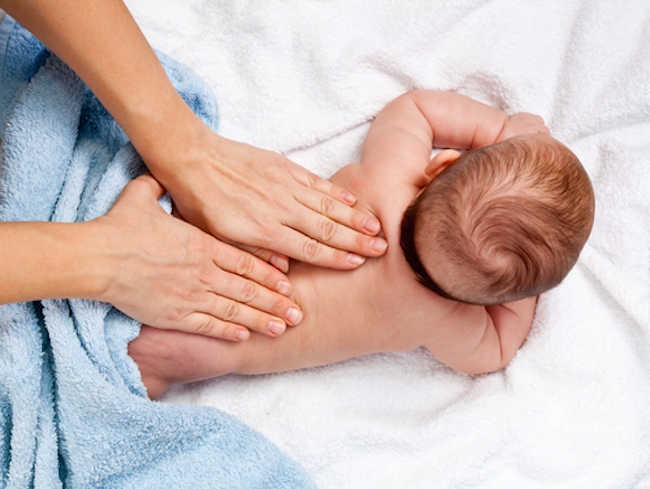 Despite most midwives recommending olive or sunflower oil for dry skin, as highlighted in a previous University study, there has been little research into the effects of these oils, outside of small studies in the lab.

This is despite changes to baby skin care being linked to a dramatic increase in eczema over the last few decades: from five per cent of children aged two to 15 in the 1940s to around 30 per cent today.

To test the effects of the two oils on babies’ skin, 115 newborn infants were recruited at Saint Mary’s Hospital to the pilot study, which was supported by the NIHR. The babies were divided into three groups – olive oil, sunflower oil and no oil.
At the end of a 28-day trial period where babies in the oil groups were treated with a few drops on their skin twice a day, the lipid lamellae structure in the skin of each baby was investigated and in both oil groups the development of the skin barrier function was delayed compared to the no oil group.

Alison Cooke, the lecturer in midwifery who led the research said: “If the skin barrier function is a wall with bricks made of cells, then the lipid lamellae is the mortar that holds it together. If it isn’t developed enough then cracks appear which let water out and foreign bodies through.

“Oil prevents this mortar from developing as quickly and this could be linked to the development of conditions such as eczema.”

The skin of the babies who were given the oils tended to be better hydrated, however the researchers feel that since the implications of the effect on the lipid layer weren’t fully understood, this was not enough of a benefit to outweigh possible harm.

There is no UK national guidance on neonatal skincare, although there is evidence from studies carried out in South Asia that sunflower oil has an anti-microbial effect, which could benefit premature babies in developing countries.

However in healthy babies in the UK, the Manchester researchers say that they cannot recommend the use of either sunflower or olive oil on babies’ skin.

Alison added: “We need to do more research on this issue with different oils and also study possible links to eczema, but what is clear is that the current advice given to parents is not based on any evidence and until this is forthcoming the use of these two oils on new born baby skin should be avoided.”

The paper, “Olive Oil, Sunflower Oil or no Oil for Baby Dry Skin or Massage: A Pilot Assessor-blinded, Randomized Controlled Trial (the Oil in Baby SkincaRE [ObSeRvE] Study),” was published in the journal Acta Dermato-Venereologica.