This series of articles looks at real therapists in practice that have developed effective business systems to not only meet their financial goals, but to create balance and meaning in their lives as well.

First in a series
This series of articles looks at real therapists in practice that have developed effective business systems to not only meet their financial goals, but to create balance and meaning in their lives as well.

In this issue, we take a look at Donnie Smith, RMT, from Hamilton, Ontario. Smith has partnered with
a chiropractor to provide a clinical setting for themselves plus a second chiropractor, a second massage
therapist, two ART providers who are massage therapists, and support staff. ART, or Active Release Technique, was developed by chiropractor and aerodynamic engineer Mike Leahy of the United States. 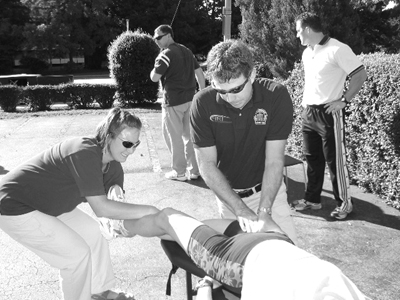 During Smith’s four years of practice, he has learned to combine ART plus David Leaf’s Advanced Muscle Testing to provide treatment for 20 to 24 patients a day, about 15 minutes each. Smith’s approach is to record via digital camera the patient’s movement/running patterns. He then uses muscle testing to assess for weakness, followed by treatment and re-assessment. Smith starts where muscle weakness presents itself, not
necessarily where the pain is showing up. He calls the approach, “not pain-focussed but problem-focussed.”

Smith utilizes pre-med students to assist the patient’s active movements during ART treatment. These students get life experience in a clinical setting, and assist Smith in preserving his body mechanics for the many treatments he provides in a day.

Smith describes the clinic as a “family” of practitioners. It’s not uncommon for a practitioner to leave a sticky note outside a treatment room to request assistance in a multi-practitioner approach to treatment.

Here, the practitioners work as a team for the best care of the patient.

Smith states: “We work hard, and push each other. We leave our egos outside (the door) during treatment sessions.” Smith’s clinic has a relationship with McMaster University, and can access X-ray services. He has also been invited to speak to 85 medical staff at the University regarding his treatment approach.

Smith treats many Olympic hopefuls and has travelled as part of medical staff for major events.

Smith embraces technology, as witnessed by the laptop in each treatment room. He uses a digital camera to film athletes before and after treatment and spends many hours after work analyzing film to look for biomechanical faults.

Smith and his associates provide full-day clinics for tri-athletes. Each athlete is analyzed, via digital film, and treated during the clinic. Athletes also usually enjoy a presentation by a professional athlete, where they can pick up tips, insights and motivation.

Smith remembers one patient that severely sprained her ankle. She was put in an air-cast, and told that her marathon, about four weeks out, was impossible given her injury. She went to Smith for assessment.

Smith muscle-tested and found the supporting muscles were strong, and there was good integrity in ankle. The chiropractor in the clinic mobilized the ankle. The athlete was treated with electric muscle stimulation (EMS), proprioceptive neuromuscular facilitation (PNF), percussive technique and ART. She was running within two weeks, and she was able to participate in the marathon.

Smith knows what it’s like to feel pain. He was injured during mountain bike racing and experienced severe back pain and drop foot. He immediately began treatment, with four days on a flexion/distraction table and ART for nerve entrapment issues.

Smith recovered well before the scheduled CT-Scan (three months), where the results showed scar
tissue at L3, L4 and L5 where he had experienced disc prolapse.

The methods he provides to others worked equally well for him. In fact, pain first led Smith to thinking about a career as a therapist.

Experiencing knee pain during his bike racing career, he received ART treatment when surgery was the only other option. ART corrected the problem. Smith decided to become a massage therapist, and completed the ART workshops between finishing massage therapy college studies and registration to practice in Ontario.

Smith’s business education started in his teens, when he worked for a retail outlet selling electronics.

Prior to becoming a therapist, Smith competed in mountain bike racing, maintaining elite/pro status for about eight years. He was sponsored by Specialized, Oakley and Gyro during his competitive career.

Smith partnered to own and operate a bicycle shop, Wheels in Motion, where he developed some of his business experience. Smith currently participates in Adventure Racing, a gruelling 24-hour relay race.

Smith describes how he was determined not to be limited in his business success – despite the framework he was presented early in massage therapy college.

“The first month of school, my teachers admitted that massage therapists have low incomes,” he recalls. “They said successful therapists can make about $60,000 per year after about five years in practice. Male therapists can expect much less.”

Smith also mentions how it was presented that massage therapists could not create self-sustaining
businesses: “You’ll have to work for a chiropractor … you will not make it on your own.”

Smith decided not to be limited by these viewpoints and was determined to generate more income than his teachers had projected. He earned more that $60,000 his first year of practice and now averages over $150,000 in income per year.

Smith has been criticized by some of his colleagues for providing shorter treatment times and billing more than other therapists. Smith stresses that he never runs anyone out the door.

“If you need the time you get it,” he responds, adding, “why do we get hung up on time? It’s the results that matter.”

Smith is considering the osteopathy program next. He has the following advice for therapists starting a business: “Schools need to empathize business skills. One of the first things I did was hire a secretary so I could focus on providing what I do best.”
Y
ou can learn more about Donnie Smith by visiting his website at www.dsmithart.com.

Donald Quinn Dillon, MT, is a therapist, writer, seminar presenter and practice management coach. He can be reached via www.MTCoach.com or through Massage Therapy Canada at www.mtseminars.com
Print this page