The purpose of this paper is to familiarize the reader with the condition of primary lymphoedema (LE) by giving the definition, pathology, diagnosis, course of the condition and therapies available. At the end, there will be a case study with a description of treatment given and how it relates to our profession.

The purpose of this paper is to familiarize the reader with the condition of primary lymphoedema (LE) by giving the definition, pathology, diagnosis, course of the condition and therapies available. At the end, there will be a case study with a description of treatment given and how it relates to our profession.

Definition
Primary lymphoedema is a lymphostatic oedema caused by impaired lymph vessel and/or lymph node development in utero. This causes impairment of lymph transport and thus an accumulation of protein rich fluid in the interstitium resulting in tissue swelling. There is no cure for this condition.

Exact numbers of the frequency of this disorder are not known. It is more common in woman (87 per cent) than men (13 per cent) and seen more in the lower extremities than the upper.

Pathology
Dysplasia of lymph vessels can cause various morphological changes such as:

In this test a radioactive dye is injected between toes number one and two. The patient then exercises to activate functioning lymphatics. At specified time intervals a radiograph is taken to see the progress of uptake of the dye by the lymphatics. It is very painful to have this dye injected. Ultrasound, CT and MRIs are not
usually indicated with primary lymphoedema of the extremities.

Therapies Available
The most common intervention that medical communities use is diuretics, elevation of limb, pneumatic sequential pumps, and possibly gradient compression garments.

Diuretics should not be prescribed for protein-rich primary LE because they merely cause the removal of water leaving behind a higher concentration of hydrophilic protein, promoting fibrosclerosis.

Pneumatic sequential compression pumps remove the water but not the protein, they do not re-direct the drainage of the affected area to functioning drainage sites and are often used at high compression (50-80 mmHg) thus causing more damage to the peripheral lymphatics. They can be used under medical supervision at correct compression (30-40 mmHg) as long as the proximal drainage sites are manually decongested before and after pumping and eliminating the deleterious effects of pump-use only.

Compression garments are absolutely essential to prevent the tissue from swelling further and must be properly fitted to the affected limb and have the correct grade of compression prescribed.

Manual Lymph Drainage with Combined Decongestive Therapy (MLD/CDT) is seldom recommended, even though in Germany it is the most prescribed therapy for lymphoedema. MLD/CDT involves the application of MLD in a certain set pattern to re-direct the flow of lymph away from the affected site to a site that is properly functioning. Treatement sessions are  from 45-75 minutes.

After treatment, compression bandages are precisely applied from the most distal end of the limb to the
proximal, with a gradual decreasing of pressure up the limb. Compression bandages are worn for the rest of
the day and, if the patient can tolerate it, into the night. The next day the whole procedure is repeated. There may be from 3-10 treatments in a week (up to two treatments a day), for 3-4 weeks. The patient is taught to wrap his or her own limb on non-treatement days.

Scrupulous skin care must be taught in order to prevent any infections from setting in. The more infections that occur, the worse the oedema gets.

Specific exercises are given. These are best done in water to utilize the hydrostatic pressure against the tissues and weight reduction of the body, easing the strain on joints. 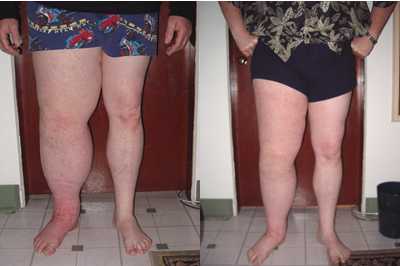 History
T.A. is a 51-year-old male who came to my office in the hopes of getting treatment for primary lymphoedema of his right leg. This condition became apparent approximately five years ago when he injured his low back. He was prescribed Tylenol 3 and physiotherapy for the pain.

After about 10 days he told his doctor that although the physiotherapy was improving his situation the Tylenol left him incapable of functioning. The doctor recommended that he take the maximum daily dose of Advil (Ibuprofen) as it did not have the strength of Tylenol but had the anti-inflammatory aspect that would help his back pain.

This patient had never taken this medication before and after another 10 days he observed that he had a general feeling of malaise. Blood tests were performed and it was discovered that his kidney function was reduced to 15 per cent. He was admitted to St. Paul’s Hospital.

The nephrologists said that he may have had an allergic reaction to the Ibuprofen and that this NSAID could cause kidney damage. His kidneys returned to normal function once taken off the medication.

About one month later he noticed his right ankle swelling, followed a month later by his right calf swelling. Shortly thereafter he saw a vascular surgeon and had a lymphoscintigraphic function test performed.

This showed that his right anterior calf had no lymphatic movement and, in general, his right leg had a much slower uptake for the dye than his left. He also had a CT scan, ultrasound, and saw a dermatologist, which revealed nothing more. He had no history of erysipelas (infection) in his leg. He was diagnosed with lymphoedema.

His doctor prescribed diuretics and recommended buying a pneumatic multi-chambered compression pump, called a lympha-press, to manage his leg edema.

Compression stockings were prescribed and a very light pair (20-22 mmHg) was worn. They were too weak and a higher grade of knee-high garments was used. They cut into the popliteal area and he eventually stopped wearing any compression garment.

On his own accord, he decided to use the pump at a very low setting (30 mmHg) while he was sleeping each night, while propping his leg up. He found that this decreased his leg size but that after an hour of ambulation his leg would re-fill completely.

I scheduled him to come for three treatments a week for four weeks. A total of 11 treatments were administered from May 5 to May 28. The photos on the previous page show him at the start of and after treatment. Measurements were taken and the volumes of his legs were calculated. His left leg was 10,681.13 mls and his right was 20,957.60 mls. This is a difference of 10,276.47 mls, or almost twice as big as the unaffected side. His right leg, therefore, weighed over 10 kilograms more than his left.

Compression bandages were applied at the end of each treatment and worn until bedtime. He then re-applied the bandages in the morning before coming back to the clinic as he was travelling from the Sunshine Coast to work in Vancouver and this would be too long a time to be without compression and walking around, as the tissues would refill. On the days where there was no treatment, he wrapped his own leg. Compliance of the patient is crucial to the success of the therapy.

During the last week of treatment, a garment fitter came to measure T.A. for a custom-fitted class III (30-40 mmHg) compression stocking that would cover his toes and end at the top of his thigh. While waiting for the garment to be made he continued wrapping his leg to maintain the reduced volume.

He now has his garment and wears it daily to maintain the current volume in his leg. He will come for maintenance treatments every three to four weeks (MLD/CDT with full wrapping). In the fall, when the weather is cooler, he may come again for another intensive treatment for further volume reduction.

• At present, there are 26 Dr. Vodder School certified therapists in British Columbia and only three in Vancouver proper. There is a huge demand for this type of work especially for post-secondary lymphoedema treatment with breast cancer survivors.

Catherine DiCecca graduated from WCCMT in 1995 and has been a certified Dr. Vodder trained MLD/CDT therapist since 1995. She is also a Basic Level teacher for the Dr.Vodder School NA. She has a practice in Vancouver and most recently in Nanaimo.
Print this page