Breathing is often taken for granted, rather like your heart beating or your blood circulating. Yet, unlike most
of the body’s automatic functions, breathing can also be consciously controlled. This is a mixed blessing, because you can develop poor breathing patterns, but then again, can relearn optimal breathing patterns as part of self-care.

Breathing is often taken for granted, rather like your heart beating or your blood circulating. Yet, unlike most
of the body’s automatic functions, breathing can also be consciously controlled. This is a mixed blessing, because you can develop poor breathing patterns, but then again, can relearn optimal breathing patterns as part of self-care. 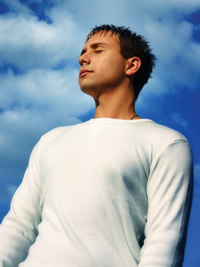 It’s easy to see that inefficient or inappropriate breathing patterns can lead to dysfunction, both structurally and physiologically.

Diaphragmatic breathing is an optimal breathing pattern that encourages relaxation and helps break pain cycles, among other things.

It facilitates good heath and should be part of everyone’s breathing pattern. Babies and young children breathe this way naturally, but life’s pressures can change this. (It can be very helpful if the massage therapist can direct the client to breathe diaphragmatically as a part of every massage treatment.)

Muscles involved in relaxed, diaphragmatic breathing are the diaphragm (a thin muscle separating the lungs and the abdominal contents), external intercostals (muscles between the ribs), scalenes and sternocleidomastoids or SCMs (muscles in the side and front of the neck). Other muscles may be used during forced breathing, but not usually with relaxed breathing.

Relaxed Inhalation
The diaphragm, a dome-shaped muscle when relaxed, flattens as it contracts during inhalation.

This pushes the abdominal contents down and outward. As the intercostal muscles contract, the ribs move up and laterally, like the motion of a bucket handle. The scalenes and SCM contract, slightly lifting the upper ribs and
sternum up and forward.

Relaxed Exhalation
This is a passive process. Once the diaphragm relaxes, the abdominal contents are no longer under pressure, and the abdomen appears to flatten. The intercostals relax, and the ribs move down and in. Then the scalenes and SCMs relax, and the upper ribs and sternum move down.

*(2) In one study, 10 to 20 minutes of meditation
(basically, diaphragmatic breathing with a quiet mind) evoked a relaxation response. One group reduced their
systolic blood pressure an average of 10 points to 137 mm Hg, and their diastolic pressure an average of five points to 88.9 mm Hg. Interestingly, these results were maintained if the breathing sessions continued daily.

Assess Your Personal Breathing Pattern
You can do this yourself while you’re reading this, or if you’re a therapist, while working with your client.

Apical breathing, also called stress or upper chest breathing, means the movement is mostly in the upper chest.
On inhalation, the ribs may move slightly, but usually the diaphragm is barely engaged. The muscles of the neck
and accessory muscles of the shoulders are doing all the work, rather than the diaphragm – this is inefficient. Since the breath is shallow, often more breaths are taken. Apical breathing is often seen with respiratory conditions such as asthma, with some postural dysfunctions and when a person is in pain or under stress.

Retraining Yourself to Breathe Diaphragmatically
Inhale through your nose. This warms and filters the air.

Exhalation begins by relaxing your diaphragm and letting your stomach muscles relax, then your ribs drop down
and your upper chest relaxes.

At first, this exercise may be difficult to do and sometimes causes feelings of stress and frustration; some people may experience light-headedness. If any of these occur, it is best to stop and try again at another time.

Who Should Not Do Diaphragmatic Breathing?
Care must be taken when doing slow, deep diaphragmatic breathing if you have IDDM (insulin dependent diabetes mellitus) and with anyone with diabetes who is susceptible to ketoacidosis. To compensate for a tendency towards
acidosis, the person may need to breathe more rapidly.

Diaphragmatic breathing may actually change insulin levels (1). Therapists, if this applies to your client, consult your client’s physician (of course, with your client’s consent) before changes in breathing patterns are attempted.


Fiona Rattray, RMT, and Linda Ludwig, RMT, are educators and co-authors of “Clinical Massage Therapy: Understanding, Assessing and Treating Over 70 Conditions,” 2000. They have been motivating clients to do self-care for a combined total of 35 years of clinical practice. Contact them at www.clinicalmassagetherapy.com