Attempts at smoking cessation have been correlated with severe withdrawal symptoms, including intense cigarette cravings, anxiety, and depressed mood. Massage therapy has been shown to reduce anxiety and stress hormones and improve mood. 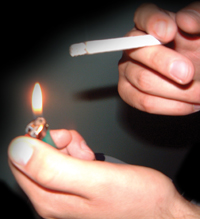 METHOD:
Attempts at smoking cessation have been correlated with severe withdrawal symptoms, including intense cigarette cravings, anxiety, and depressed mood. Massage therapy has been shown to reduce anxiety and stress hormones and improve mood. Twenty smokers were randomly assigned to a self-massage treatment or a control group. The treatment group was taught to conduct a hand or ear self-massage during three cravings a day for  one month. Self-reports revealed lower anxiety scores, improved mood, and fewer withdrawal symptoms. In addition, the self-massage group smoked fewer cigarettes per day by the last week of the study. These findings suggest that self-massage may be an effective adjunct treatment for attempting smoking cessation, to alleviate smoking-related anxiety, reduce cravings and withdrawal symptoms, improve mood, and reduce the number of cigarettes smoked.

METHOD:
Thirty-two children with asthma (16, 4- to 8-year-olds and 16, 9- to 14-year-olds) were randomly assigned to receive either massage therapy or relaxation therapy. Their parents were taught to provide one therapy or the other for 20 minutes before bedtime each night for 30 days.

RESULTS:
The younger children who received massage therapy showed an immediate decrease in behavioral anxiety and cortisol levels after massage. Also, their attitude toward asthma and their peak air flow and other pulmonary functions improved over the course of the study. The older children who received massage therapy reported lower anxiety after the massage. Their attitude toward asthma also improved over the study, but only one measure of pulmonary function (forced expiratory flow 25 per cent to 75 per cent) improved. The reason for the smaller therapeutic benefit in the older children is unknown; however, it appears that daily massage improves airway caliber and control of asthma.