After amputation of an arm, most amputees report vivid and continuous sensations of their missing limb. Some can even move their missing hand as if it were still there. For many amputees, though, these sensations are painful and, unfortunately, there are no effective treatments for this pain.

How could pain arise from a missing hand – and what can we do about it? Our brains contain a detailed map of our body that allows us to move and feel as we explore our world (see the illustration below). Our brain is also a dynamic organ, adapting and changing to experience. This flexibility is called brain plasticity – the process by which we develop from infants to adults, learn new skills and adjust to aging. 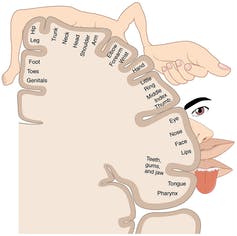 Cortical map of the senses. OpenStax College/Wikimedia Commons, CC BY

Traditional theories suggest that phantom limb pain arises from “maladaptive plasticity”, whereby a change in the brain results in a negative, or maladaptive, outcome. According to this theory, neighbouring body parts “invade” the missing hand area, creating a signal mismatch that is interpreted as painful. For example, when you lose a hand, the representation in the brain for the missing hand is taken over by neighbouring body parts, such as the arm or the lip representation (the face neighbours the hand area). This then causes the deprived hand region to respond to sensory inputs intended for the arm or lip, and it is the mismatch between body part representations which is thought to result in an error signal that is interpreted by the brain as painful.

Treatments attempting to reverse the invasion – such as mirror therapy, where the visual reflection of the intact hand aims to reinstate the missing hand’s brain representation – have had limited success. Also, new studies have revealed that the representation of the missing hand stays in an amputee’s brain map for decades. It is not overtaken by neighbouring body parts, and this persistence is related to phantom limb pain.

With this in mind, researchers at the University of Oxford and University College London tried to find out if a new treatment, targeted towards brain activity in the missing hand area, could lead to phantom limb pain relief. They used a technique called transcranial direct current stimulation (tDCS) to manipulate activity in the missing hand area with small electrical currents, while amputees were moving their phantom hand in an MRI scanner.

Importantly, these phantom movements differ from imaginary movements and activate the same regions in the brain that two-handed people do when they move a hand. Also, when moving the phantom hand, amputees also engage the very same nerves, or motor pathway, that previously provided sensations and movement to their missing hand. By focusing the tDCS on the missing hand’s brain area during phantom movements, researchers can direct activity, not just in the brain, but also in the damaged motor pathway.

Example of phantom hand movements made by amputees in the scanner, as well as the tDCS treatment stimulation. Kikkert et al., 2018, Annals of Neurology.

The results of the study, published in Annals of Neurology, show that a single session of this technique led to significant phantom limb pain relief, with effects lasting up to one week, compared with sham stimulation where electrodes were placed on the scalp but no stimulation was given. After treatment, phantom limb pain relief was associated with reduced brain activity in the missing hand area.

Researchers also found that moving the phantom hand activated regions of the brain that deal with pain. The extent to which these pain regions were activated predicted the reduction of brain activity in the missing hand area as well as the pain relief experienced by the amputees after treatment. This suggests that phantom limb pain may emerge from brain activity in pain processing areas, especially when damaged motor pathways associated with the phantom hand are activated.

It is unclear whether tDCS treatment led to pain relief by regulating the processing of motor signals from the phantom hand or by altering cognitive evaluations of these signals. Despite these unanswered questions, this technique offers a cheap, safe and easy-to-use way to provide relief for many amputees who suffer from chronic, “phantom” pain.