You may not recognize the names of the massage therapists profiled below, but you might recognize their patients: singers, actors and elite athletes. 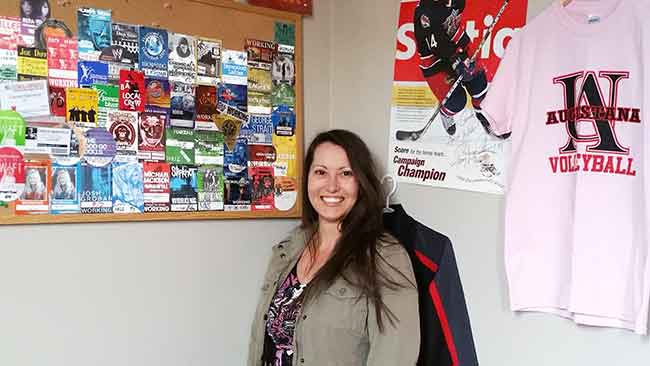 Carole Wakefield has built up a collection of stage passes from years of working with various artists and their teams. Rubbing elbows with celebrities is a typical day in the life of these RMTs.

These are not your typical clients. So how do RMTs develop unusual practices focused on particular niches? Read on to discover extraordinary paths to success, and perhaps some tips to help you build a name for yourself in the area you want to target.

Therapy in the key of Carole
Carole Wakefield is a RMT in Wainwright, Alta. She has worked for countless pop, rock and country music stars on tour across Canada, including many who perform at Rexall Place in Edmonton, where Wakefield is the resident massage therapist for touring music acts. Managers who work for luminaries such as Britney Spears, Van Morrison, The Eagles and Reba McEntire have all called on Wakefield to provide massage therapy for crews and musicians.

She certainly has worked with many high-profile performers. But many of her patients are also the folks who usually stand behind the stars.

“There are so many different people and jobs to make the tour run,” Wakefield points out. “It’s the crew that sets up heavy equipment, camera operators who hold gear on their shoulders, technicians who work with small dials and wind up with carpal tunnel syndrome. Guitar players get frozen shoulders. Dancers need full body stretches. Acrobats may have a fall.”

“It’s a wide variety,” she says, “but I see more carpal tunnel than anything else.”

Technicians certainly get it, but so do drummers and guitar players. Many patients also seek relief from headaches that result from stress and fatigue.

The perks are notable. Obviously, Wakefield meets veritable bright lights in music. But she also gets to sample the five-star catered meals that tour workers are served. And she gets to see concerts for free. That’s a double bonus: a perk and an ego boost.

“Working with these people and then seeing them perform, you get a sense of pride,” she says. “You know they’re on top of their performance because you helped them.”

When Wakefield travels with acts, her colleagues at her clinic, Awaken Therapies, hold down the fort. She opened the business in 2008 because although the tours and concerts pay well, they’re sporadic. The clinic helps build a regular clientele.

How did she come to have this star-studded career? About 13 years ago, Wakefield happened to meet a concert road manager. Always looking for potential new clients, she asked if any of his contacts needed massage therapy. It did not take long before she was providing therapy to famous musicians and their crews. Those initial jobs went well and referrals have carried her along since then.

Wakefield doesn’t see herself focusing on the music industry forever. Her passion is sports massage therapy. She currently supports the men’s volleyball team at the University of Alberta’s Augustana campus in Camrose.

“My ultimate goal is to be part of the Olympics,” she says.

White’s original training is athletic therapy (AT). Initially, he was working with provincial teams and recreational clubs, building up his network to eventually provide AT services to outfits playing at national levels. After a few years, he decided to become a massage therapist as well to broaden his skills and his client base.

Having both the AT and the RMT designations helps set him apart.

“In Canada right now, only five of us practice athletic therapy and massage,” White says. “So I don’t position myself as only a RMT when these jobs are contracted out. The teams want a well-rounded health professional with a full range of experience.”

His athletic-focused career is a natural fit considering his personal sport history. White was a competitive swimmer from the age of 10. He went on to compete at the provincials and varsity levels. “I had my own injuries and sprains that needed treatment,” he says. “Meeting the therapists who helped me, I thought, ‘This is something I’d be interested in doing.’”

Athletes constitute a special class of patient compared to non-athletes.

“The rehab process differs,” White says. “It occurs at a faster pace and the recovery is a bit speedier. It’s their job. They work for national teams. They have full access to all the treatments available to them, full-time, as opposed to an office worker who maybe sees you once or twice a week for six to eight weeks and has other commitments.”

White’s reputation as an elite sports therapist pays off when it comes to building his business.

“When people call, they don’t necessarily ask for me by name, but they want the therapist who works with Rugby Canada and Sledge Canada.”

Carole Wakefield has built up a collection of stage passes from years of working with various artists and their teams.

Picture this RMT on set
Alexandra Lynch, RMT, may be known as the therapist who has worked on films such as the K-19: The Widowmaker (starring Harrison Ford) and Amelia (with Hilary Swank). Owner of Stage Hands Massage Therapy in Halifax, she focused on film and TV while building her practice.

When Lynch and her business partner Cathy Tanner graduated from ICT Northumberland College in 1999, they wanted to establish a unique mobile massage therapy clinic – a service for the various actors and crews who used to flock to Nova Scotia to film. Lynch was interested in the industry, having done some amateur acting in the past.

“No one had gone after that niche. I had a couple of connections, and it grew from there by word of mouth.”

Tanner left Stage Hands in 2008, but Lynch has successfully carried on. She brings her portable massage table, linens and lotions to convenient locations for clients. That’s important for high-profile actors, she says.

“They don’t really want to be out in public visiting a clinic,” Lynch notes.

Her work is transferable, too. Her clients have been in penthouses, hotel rooms and movie trailers.

“You try fitting a massage table into a movie trailer. It’s not as easy as it might sound.”

In some respects, her clients are different from those of most other therapists.

“Many actors are really well cared for and they know how to look after themselves, because their physical wellbeing is their livelihood.”

But in other ways, the stars are no different from anyone else. As Lynch says, “it doesn’t matter if you’re making $10,000 a year or $10 million a picture. When you’re on the massage table, you are at the most vulnerable and the most who you actually are.”

Until recently, about 50 per cent of her business came from the film and TV industries. But that started to wane about a year ago, after the Nova Scotia government changed the province’s film tax credit system, replacing a $24-million program with a much smaller $10-million one that covers fewer costs and makes Nova Scotia a less attractive filming location than it used to be.

What’s next now that the film industry isn’t as strong? Lynch says she is building a base of clients among people who have chronic illnesses and mobility challenges. Her practice is completely mobile, so she has no trouble bringing therapeutic know-how to individuals who would benefit from it, but have trouble getting to a traditional clinic.

“That has kept me busy,” she says.

Stefan Dubowski is a freelance journalist based in Ottawa. You can reach him by e-mail at dubowski@stiffsentences.com.