For many massage therapists, there is an endless quest to improve patient care and decrease the time frame by which patients have to deal with acute or chronic conditions. 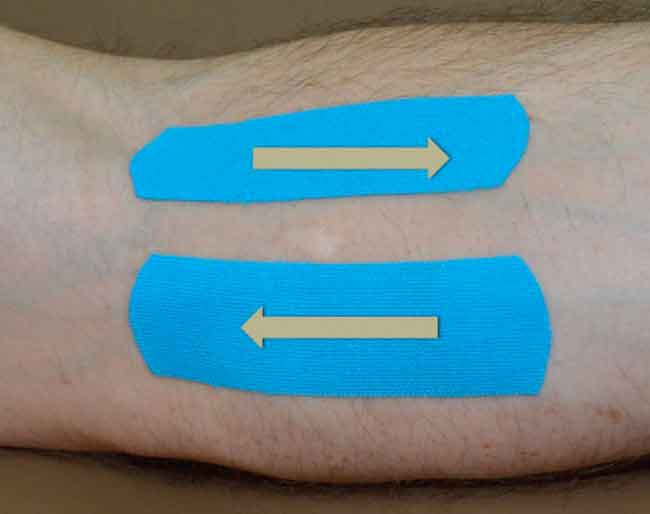 While the profession moves forward and makes advances in research, one thing will always remain the same: A massage therapist will not fix every patient they treat.

With current research advocating for active recovery programs, massage therapists are looking for new modalities to help re-enforce treatment strategies outside of the clinical space. With any new modality there are both benefits and risks associated with the intervention. In general, the easier a modality is for a patient to understand, the more compliant the patient will be with the instructions surrounding it.

One modality that more massage therapists are turning to is kinesiology taping. Kinesiology tape was developed in Japan in the mid 1970s by Dr. Kenzo Kase, and made its first mainstream appearance in the 1988 Seoul Olympics. Since then, it has increased in popularity in a number of athletic environments, including track and field, and more recently in CrossFit. With popularity, however, comes scepticism and the question of, “How does kinesiology tape work?” and “Can it be used as part of a treatment plan in a massage therapy practice?”.

While creating treatment plans to return patients to prior injury status is complicated and multifactorial, there are common goals all massage therapists have. Pain, swelling, tissue quality and improvement in activities of daily living are measures that can be followed both subjectively and objectively throughout patient recovery.

Pain is the most common stress response due to injury that patients associate with. The effects of tactile stimulus on pain reduction have been well researched by both the Body in Mind Organization of the University of South Australia and the Neuro Orthopaedic Institute, also in Australia. Massage therapists apply these principles and play an integral role in pain reduction in both acute and chronic settings. This is done through utilizing the power of touch, in an attempt to modulate signals from the peripheral and central nervous system.

A massage therapist’s first point of contact is the skin, the body’s largest exteroreceptor synapsing with the central nervous system. Within the epidermal and dermal layers of the skin there are a number of mechanoreceptors which help to facilitate sensory processing. The ruffini endings and merkels discs are slow adapting mechanoreceptors responding to skin shear and light touch, respectively. Slow adapting mechanoreceptors continue to send information to the central nervous system as long as they are being stimulated.

Through its elastic properties kinesiology tape provides similar continuous, low grade, tactile stimulus to the central nervous system. After the patient leaves the treatment space, tactile stimulus produced by the tape may assist in decreasing pain perception and fatigue often associated with injury.

Scar tissue
Tissue quality is always a topic of discussion in the field of massage therapy and the debate continues as to whether therapists can “break down” scar tissue. While the field still awaits definitive research, one topic that appears to be clearly understood is that both manual therapy and exercise can control and increase the function of tissue during the scarring process.

In chronic conditions, the quality of collagen laid down has been shown to be less functional and more neurologically sensitive in creating a painful stimulus. In these cases when tissue is loaded and manipulated over time, it has been shown to have a better opportunity to recover.

Less understood is the influence that superficial healing plays in this process. In 2004, Karl Lewitt, examined the clinical importance of superficial scarring and it’s contribution to myofascial pain syndromes. He encouraged the early manipulation of superficial scars to prevent long-term complications and symptom presentation.

Through the work of Lewitt and others, superficial scar manipulation has become more clinically relevant in massage therapy. Models of treatment are based predominantly on the anatomical organization of tissue. By manipulating tissue in the early stages of healing, the therapist attempts to increase a superficial scar’s mobility on the layers of fat, fascia and muscle deep to it.

Kinesiology tape is used in a similar fashion. Tape is applied to create low-grade shear force on the skin during the healing process. A benefit is that this force can be applied to the skin for significantly longer periods of time than a typical manual therapy treatment. Force is applied in an attempt to improve tissue quality of the scar as granular tissue proliferates within the injury site.

Early stage intervention through both manipulation and taping may help facilitate the healing process and lead to less complication from scars long-term. Taping offers the massage therapist a therapeutic modality that may be of benefit, and allows the therapist to treat tissue in a stage of the healing process that is often ignored.

Swelling
In acute scenarios the cardinal signs of inflammation are often seen as a by-product of pathological response. In chronic conditions, fluid accumulation may be present due to poor tissue quality or a change in the anatomy of the systems responsible for fluid clearance. An example of this is the onset of lymph oedema following the removal of axillary lymphatic nodes post mastectomy.

In the past, research exploring fluid management and kinesiology tape examined whether it directly influenced perfusion to an injured area. Taping was thought to increase or decrease blood flow through mechanisms similar to compression therapies. More recently, research has refuted this claim, while new research explores the role of the lymphatic system in fluid management.

Lymphatic kinesiology tape applications are applied in a “web-like” fashion. This is done in an attempt to influence the space between the dermis and superficial fascial layer. Overtime, the tape is thought to assist the otherwise passive lymphatic system in clearing fluid from the interstitial space.

For massage therapists practising lymphatic drainage, kinesiology tape may be an excellent adjunct to manual therapy, and may offer additional modality where patients are unable to tolerate, or were unsuccessful with, compression-based therapies.

The ultimate goal of the therapist is to manage the stress responses of injury, dysfunction and lifestyle. Kinesiology tape offers a low-cost and minimally invasive modality that may help re-enforce the massage therapist’s treatment goals, and serve as a viable adjunct to a manual therapy practice.

As with all modalities, kinesiology tape does not yield a desired clinical result in every case, but research on its application continues.

What does remain to be true is that there are very few negative side affects to this modality. If the patient is unhappy with the tape application, they simply remove the tape from the skin.

Conor Collins is a massage therapist and sports injury therapist based in Ancaster, Ont. He has been using kinesiology taping in his practice for almost a decade. He has a special clinical interest in treating triathletes, runners and injuries to the foot and ankle. You can reach him at www.conorpcollins.com.

This article originally appeared in our Winter 2016 issue.