How does space travel affect the spine? Astronauts on long missions in space have atrophy of the muscles supporting the spine – which don't return to normal even several weeks after their return to Earth, reports a study in Spine, published by Wolters Kluwer. 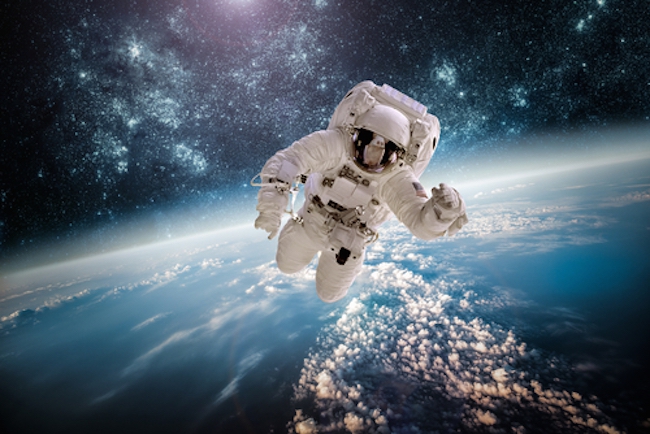 The results provide new insights into the elevated rates of back pain and spinal disc disease associated with prolonged spaceflight, report Dr. Douglas Chang of University of California, San Diego, and colleagues. “This could provide helpful physiological information to support a manned mission to Mars,” the researchers write. The data were obtained as part of a NASA-funded research study, led by Drs. Alan Hargens and Jeffrey Lotz.

Six NASA crewmembers were studied before and after spending four to seven months in “microgravity” conditions on the International Space Station. Each astronaut underwent magnetic resonance imaging (MRI) scans of the spine before their mission, immediately after their return to Earth, and again one to two months later.

The goal was to understand factors affecting lumbar spine strength and low back pain during long-duration spaceflight, as well as the spine’s response after returning to Earth gravity. Back pain is common during prolonged missions, with more than half of crew members reporting spinal pain. Astronauts are also at increased risk of spinal disc herniation in the months after returning from spaceflight – about four times higher than in matched controls.

These changes are accompanied by an increase in body height (about two inches), thought to result from spinal “unloading” and other changes related to the lack of gravity. The researchers used an image “thresh-holding” technique to estimate lean muscle separated from non-lean muscle components.

The MRI scans indicated significant atrophy of the paraspinal lean muscle mass –which plays a critical role in spinal support and movement – during the astronauts’ time in space. The lean muscle, or “functional,” cross-sectional area of the lumbar paraspinal muscles decreased by an average of 19 percent from preflight to immediate postflight scans. A month or two later, only about two-thirds of the reduction had recovered.

There was an even more dramatic reduction in the functional cross-sectional area of the paraspinal muscles relative to total paraspinal cross-sectional area. The ratio of lean muscle decreased from 86 per cent preflight to 72 per cent immediately postflight. At follow-up, the ratio recovered to 81 per cent, but was still less than the preflight value.

In contrast, there was no consistent change in the height of the spinal intervertebral discs. Chang and coauthors write, “These measurements run counter to previous hypotheses about the effects of microgravity on disc swelling.” Further studies will be needed to clarify the effects on disc height, and whether they contribute to the increase in body height during space missions, and to the increased risk of herniated disc disease.

Meanwhile, the finding of paraspinal muscle atrophy suggests possible preventive steps to reduce the spinal effects of spaceflight. For instance, core-strengthening exercises, like those recommended for patients with back pain on Earth, might be a useful addition to the astronaut exercise training program.

Yoga might be another promising approach, especially for addressing spinal stiffness and reduced mobility. Chang and his colleagues conclude: “Whether new exercise countermeasures can prevent in-flight paraspinal muscle atrophy, improve spinal pain and function, shorten recovery time, and how such exercise might be performed in a microgravity environment with available exercise equipment need further study.”

Chang commented, “Above all this science, what I find is the most unique aspect about space research is the inspiration, curiosity and excitement generated in nearly everyone I talk to in terms of overcoming personal challenges, questioning our place in the Universe, and addressing change here at home.”