Las Vegas – The foot and tibial angles of a rearfoot strike runner do not correlate well with loading impact rates, according to research presented at this year's Association of Academic Physiatrists Annual Meeting in Las Vegas, Nevada. 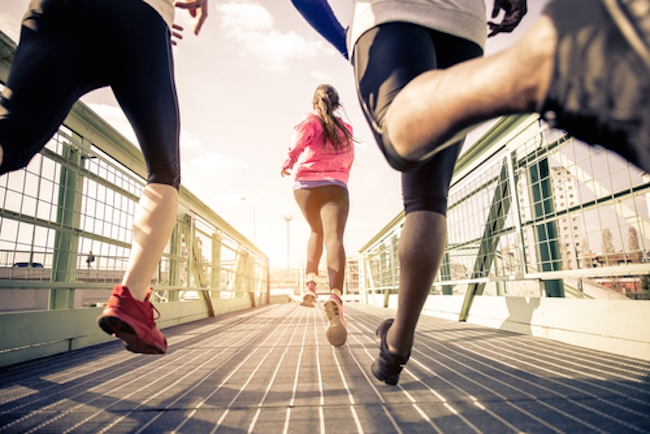 Runners with a rearfoot strike make up 69 to 95 per cent of modern competitive and recreational endurance runners. A rearfoot strike is associated with an abrupt impact and increased force applied to the runner’s leg and foot (called a load rate), which can lead to injury.

Forefoot runners have been reported to sustain less injury than rearfoot runners. Rather than transitioning to a forefoot running pattern, which takes time to adjust to, it has been suggested that landing with a less dorsiflexed foot and a more vertical tibia (or, shinbone, as it is commonly called) is a way to lower impact on the leg and foot. In other words, landing with a near flat foot onto the ground.

To address this, researchers recently studied the relationship between foot angle (angle formed between the ground and foot on initial contact with the ground) & tibial angle (angle of the tibia from perpendicular landing) with vertical average load rate as well as vertical instantaneous load rates. These load rates are a subset of values involved in ground reaction forces. A ground reaction force is the force exerted by the ground onto the body at the time when the body comes into contact with the ground.

“In runners, the association of higher impact loading rates and injury risk has been demonstrated in previous studies,” said Dr. Robert Diaz, resident physician at Spaulding Rehabilitation Hospital/Harvard Medical School and lead investigator in the study. “To obtain this valuable information, a clinic would need to utilize expensive equipment such as an instrumented treadmill lab with motion capture cameras and computer software to analyze 3D models and force data.

“Our team wanted to identify a proxy for loading impact rates to attempt to use this information in a typical musculoskeletal or sports medicine clinic without the expensive equipment. The proxies we chose included the foot and tibial angle values on footstrike that were obtained using a digital camera that any clinic would have access to. We hypothesized that those rearfoot strike runners that had higher foot and tibial angles would have higher impact loading rates, and therefore would have a higher risk of a running injury.”

Diaz’s team studied 110 runners who typically run barefoot. Sixty-nine of these runners were being treated for a running injury at the time of the study, and 41 of the runners were healthy. The group, which was evenly split between men and women, had an average age of 36, an average BMI of 23, and were rearfoot.

The participants each ran on a treadmill while a high-speed camera recorded 10 consecutive left foot strikes. Diaz’s team used the video footage to calculate average foot and tibial angles as well as vertical average load rates and vertical instantaneous load rates in each participant.

“Based on our team’s study, unfortunately a rearfoot strike runner’s foot and tibial angles do not correlate well with loading impact rates,” Diaz notes of the findings.

“We recommend to our colleagues not to use these angles as surrogates for estimating impact loading in runners. Our data suggests that there are other contributors, besides foot and tibial angles, that are important to determine impact loading values. For those runners who are interested in lowering their impact loading and injury risk, we recommend evaluation in a running lab.”