We often see clients spend their days sitting behind desks at their nine-to-five office jobs or standing for prolonged periods working in manufacturing or retail. 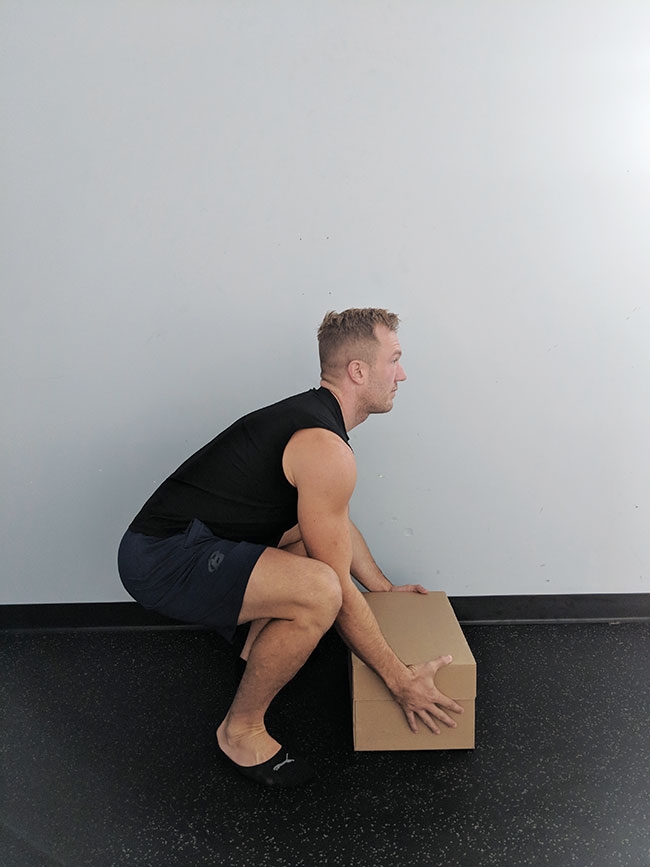 Much like the squat position (300% compression on discs)* it’s important to teach clients to lift properly.

Commutes may be getting longer due to closed roads, traffic delays or congestion, adding on many more minutes of sedentary time. Then, after their long day, all our clients want to do when they finally arrive home is to sit on the couch to catch up on sports or their guilty pleasure show. That’s not a lot of movement. In fact, according to the Canadian Cancer Society, Canadians sit on average for 69 per cent of the day.

By the time the weekend rolls around, there may be a sudden burst of motivation to get active, attend a spin class or hike that trail. Or maybe the to-do list has grown and precious hours are spent landscaping, snow shovelling, or refinishing that old dresser. All of a sudden, clients are up and moving (albeit only twice per week) and the next day, they’re sore.

The likely culprit
The symptoms our clients complain about after doing weekend projects is likely delayed onset muscle soreness (DOMS), which is very common – even among high calibre athletes. Minor muscle strain (less than 10 per cent of muscle fibre tearing) would be classified as DOMS. Stretching, joint mobilization, trigger point therapy and even cryotherapy have been shown to reduce discomfort. DOMS will fade away two to three days after activity, so if a therapist is treating them early in the week, it will be a strong indication. However, it’s important to still assess, look for and screen underlying issues that may be contributing factors.

As massage therapists, we need to educate our clients on the importance of regular exercise. When we say “regular exercise,” it can be something as simple as daily walks, plus light resistance exercises a couple of times a week to get the muscles moving and heart pumping. Stretching should also be a part of your client’s home care. Finally, have them be accountable: Write down in your charts what exercises you’ve outlined and how often to do them. At the next appointment, ask if they were compliant.

Encouragement – even if our client did the exercise just once a week – is a massive step forward to getting their regular exercise in, and will still help them condition after the weekend aches and pains decrease.

Massage therapists should also educate clients on movement and regular breaks if they work in an office. Again, it’s simple tasks like getting up to grab some water, going for a bathroom break, or going through a two-minute stretch once an hour is often enough. Asking the client how many hours they work in a day, if they have a commute and what their hobbies are, gives us a baseline of how much they sit on a daily basis.

Observations
Observing our client in the seated position can show us plenty of repetitive strain issues. Anterior head carriage, medially rotated shoulders and protracted scapulas with associated hyperkyphosis, would be some of the more common observations we would see. When we sit, muscles like the gluteus group and the quadriceps are massive postural muscles that are not being used – our back muscles and abdominals take much of the force and eventually fatigue, compromising our spine.

An individual with strained posture will not have a proper lifting technique, which leads to the use of the back, rather than the legs. A rush to “get the task done” takes over, leading to repetitive strain and twisting, putting even more load on the back. Sitting on our haunches rather than using a healthy squatting position can also put an unnecessary load on the knees. Other weekend tasks may involve awkward body positions, forcing people to torque or twist to reach for, or hold something in place. (Think: reaching for a bolt while working on a car.)

If we ask a client when the discomforted started, and they say it’s gradual, it’s critical to understand what repetitive tasks they are doing. It may be a singular movement that led to the onset of pain, but either way, it’s a good idea to ask your client to show you specifically what they were doing when the pain started. Pain from strain often starts locally and gradually builds into a blanketed area, as the muscles guard other damaged tissue, such as other muscles, sprained ligaments or nerve irritation from a possible disc degeneration, or referral pain creates a larger surface area of discomfort.

Relieving and aggravating factors are a large indicator of what the source of pain is. Does ice or heat help? If they took medication, what kind was it? Was it NSAIDs (more inflammation) or was it analgesic (spasms, guards, strain) and did it help? Does lying down (complete muscle rest), standing (more load on the hip and leg muscles) or sitting (more load on the back and abdominal muscles) relieve the pain?

With range of motion and orthopedic testing, it’s important to communicate with the client that we are trying to recreate patterns of discomfort to help better understand the problem.

Treatment should first focus on immediate symptoms, but there’s always the secondary goal of postural change. Your homecare should be related to posture, even if it means clients have to be more aware of how they sit. Finally, guiding your clients to reputable videos or articles on proper lifting techniques can help keep those “weekend warrior” pains away.

CALEB FENTON, RMT, SMT (cc) has been a massage therapist for nine years and graduated from the Professional Institute of Massage Therapy with honors. He currently practices in a busy multiple disciplinary clinic with other RMTs, physiotherapists and chiropractors in Steinbach, Man., where he lives with his wife and two kids. He has mentored and tutored several massage therapists, and helps with local sports teams to assess and treat athletes. Fenton is currently developing his own seminars to teach massage therapists to find confidence in clinical understanding and practice.