For the past several years, the Atlantic College of Therapeutic Massage (ACTM) has been involved in several research projects associated with the health and wellness of Massage Therapists (MTs). To date, the research literature on the profession of massage therapy has centred around the validity of specific techniques or case studies on the efficacy of specific modalities. Unlike many professions, MTs use their bodies as their work tool and, therefore, place physical and biomechanical strain on their musculoskeletal system.

For the past several years, the Atlantic College of Therapeutic Massage (ACTM) has been involved in several research projects associated with the health and wellness of Massage Therapists (MTs). To date, the research literature on the profession of massage therapy has centred around the validity of specific techniques or case studies on the efficacy of specific modalities. Unlike many professions, MTs use their bodies as their work tool and, therefore, place physical and biomechanical strain on their musculoskeletal system. 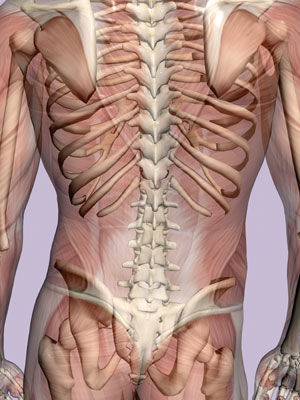 To date, we have conducted three research studies. The first two assess specific biomechanical and neuromuscular demands associated with performing massage techniques.  The first study investigated the postural and low back demands of performing a standard 45-minute massage, the results of which have recently been published1.

In our second study we compared the postural and muscular demands of the upper extremity and back when performing a 15-minute on-site (Corporate) massage with a client in a massage chair and on a massage table. The study results have recently been submitted for publication2. Readers are also encouraged to visit, www.actmonline.com, the ACTM website, for more research-related information.

In summary, these two studies revealed that the non-neutral postures used during some massage techniques can increase the risk of musculoskeletal injury over time. Although the peak compressive loads estimated on the low back during massage treatments were found to be low, the cumulative load on the low back structures were found to be significant when extrapolated to four or five, 45-minute massages performed in a day.

In interpreting and discussing the relevance of our findings, it became abundantly clear that there was a lack of epidemiological evidence indicating the prevalence and incidence of musculoskeletal injuries among massage therapists. In fact, we only had anecdotal support from talking with therapists at several professional conferences.  Therefore, we decided to conduct a cross-Canada survey as a preliminary account of such concerns among massage therapists in Canada.

What We Did
In the Winter of 2006, a web-based survey was administered on the ACTM web page. Massage therapists from across Canada were informed and invited to take part in the survey that investigated the prevalence of musculoskeletal pain. The survey focused on the upper extremity only, asking about low back, neck, shoulder, wrist and thumb pain. An advertisement was sent out in the Massage Therapy Canada magazine, e-mails were sent to the Provincial Associations for distribution to their members, and students from the Atlantic College of Therapeutic Massage were assigned to a province or territory to collect e-mail addresses for massage therapists with listings on the internet. The rest of this article highlights some of the results. 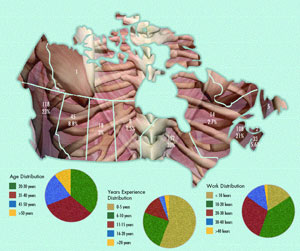 Demographics
A total of 501 RMTs answered the survey (see map above for the numbers from each province). British Columbia, Ontario and New Brunswick constituted the majority of the respondents. The three pie charts, at right, outline the age distribution, years of work experience and work distribution. In summary, 415 female and 86 male RMTs responded to the survey. Two-thirds of the respondents were between the ages of 20 and 40 and just over half had five years experience or less. Approximately 40 per cent of the respondents indicated they worked between 20 and 40 hours per week, with  15 per cent indicating they worked less than 10 hours per week and 30 per cent indicated working 20-30 hours per week.

It is interesting to note that the prevalence of low back pain was higher for younger age groups which naturally correlates with those with less years of work experience. This is not dissimilar to findings in industrial populations where a large percentage of the experienced workers have adopted techniques that have permitted them to survive their careers without injury3.

The table below provides a summary of the responses to the survey questions:

Some Other Interesting Findings
Of the 501 RMTs responding to the survey: 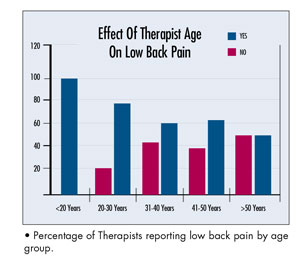 Percentage of Therapists reporting low back pain by age group.

Conclusion
This survey was answered by 500 Massage Therapists across Canada. It is understood that there are nearly 10,000 RMTs in Canada currently4, and this survey captures the response of 5 per cent of this population.

It is also understood that those who are suffering with musculoskeletal pain may be more inclined to take the time to answer the survey. However, the staggering incidence rates reported by these respondents provides a clear rationale for further investigation into the musculoskeletal demands of the occupation in order to provide proper training and guidance to help reduce the rates suggested by this study.

It also is interesting that 87 per cent of respondents report they received self-care education and 89 per cent reported they received proper posture instruction from their formal massage educational institution; this poses the question of why work related musculoskeletal injuries occur. Is it due to lack of proper instruction that massage therapy institutions are educating Massage Therapy students or do Massage Therapists disregard the importance of following a regimen of self-care routines and proper posture habits? Many reasons may be involved. Identifying why and how Massage Therapists develop musculoskeletal injuries are essential to contributing to the longevity of the Massage Therapy occupation. Our previous research has demonstrated that there exists a biomechanical and neuromuscular demand with performing massage treatments; the goal is to provide recommendations for proper technique
to ensure a long and healthy career.