I came to the realization, one day, that I was doing a great job of looking after everyone in my life, except myself.

So, after planning what was to be my first vacation in 14 years, I finally decided on a 7-day stay at the “Eastman Spa” in Quebec. I can’t remember how much this cost me, but I do remember that it was worth a million dollars. 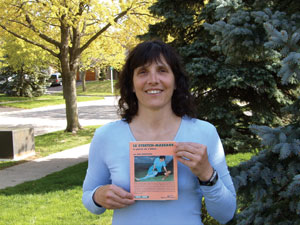 While waiting for my ride home, I decided to browse in the gift shop. I spotted a little book, entitled “Le Stretch-Massage,” le plaisir de s’etirer, by Joel Savatofski. It was all of 80 pages, half of which were pictures. Looking at the pictures, I could imagine how beneficial partner stretching would be for the karate students following a rigorous class. I quickly wrote down the title, author and ISBN of the book, thinking that I would buy the English version, so that all of the karate instructors could read it and use it too.

I realized that the only way I would be able to have copy of that book was to hope that the one at the spa would still be there.

One week later, the book was in my hands. Within the first five minutes of reading, I knew that, in its present form, it could not be used for partner stretching in a karate class. The principle of the book was based on the giver’s ability to fully relax the receiver by use of soft music, candle light, and deep breathing. This would not go over very well with my karate students. None the less, I finished reading the book and chose several stretches to have the students try with each other.

A few days later, my sister, Tundy, called me complaining of neck pain and a bad headache from a day spent cleaning house and cooking.

I remembered that the book claimed to alleviate these problems, so off I went with the book and a CD in hand to put Le Stretch-Massage to the test. To my surprise, and hers, her symptoms were completely alleviated.

Over the next three years I performed countless stretch massages on friends, family, acquaintances, and acquaintances of my family, friends and their acquaintances. The complaints that people presented with ranged from headaches, neck pain and low back pain, to more ambiguous complaints such as the inability to brush their teeth after a skiing accident, make a bed or bring a glass of water to their mouth after a car accident, or sit for more than three minutes at a time after a fall.

Keep in mind that, at this point, I had not yet studied massage therapy and didn’t know what whiplash or degenerative disc disorders were. Upon arrival each person would tell me what their problem was, I would put on a relaxing CD, have them lay on my living room floor, and proceed to do the techniques that I had learned from the stretch massage book. Once I had memorized the techniques, (within the first month) I started to modify them. Sometimes because it was not comfortable for the recipient and sometimes because their body was not moving the way I had come to know that the body should move. What mattered the most, and what kept me inviting total strangers into my home was that everyone (and I mean everyone) experienced improvement when they left.

One day in April 2001, everything changed. My close friend, Pam, had been in a car accident nine months earlier and had been seeing a physiotherapist three times a week with no improvement. I had reached the point where I couldn’t stand watching her in pain any longer and I offered to give her a stretch-massage. Many other people who presented with similar pain had experienced relief with these techniques. Pam’s pain seemed much worse than that of any other person I had seen and I worried that I might hurt her. This is why I had not offered to treat her before that day. We agreed that if the stretch-massage helped, even if just a tiny bit, that she would let me repeat it before going back to the physiotherapist. As with everyone else after the treatment, Pam was pain-free. I checked in with her regularly for two weeks following and she remained pain-free. Mid-way through the third week she told me she was having some discomfort so I gave her a second stretch massage. To this day, she hasn’t had any problems stemming from this injury. At that time, Pam’s physiotherapist contacted her insurance adjuster with concerns that Pam had cancelled all her appointments and claimed to be fully recovered. When Pam described the treatment she had received to the adjuster, he asked if I would take on more clients. This was when I realized that if this technique could bring great benefit, then it also had the potential to cause harm. I told the adjuster that I was not available for the next two years as I had enrolled in the massage therapy course at Sutherland-Chan School & Teaching Clinic in Toronto.

Throughout my massage therapy training I continued to practice stretch massage and focused my research course on it with the assistance of a few of my fellow students. No one I met in the massage therapy field had ever heard of Stretch Massage, nor could anyone answer my questions about how or why it was so effective.

By the end of my first year, it was clear to me that the person I should talk to was Joel Savatofski, the author of “Le Stretch-Massage.” I wondered if Mr. Savatofski realized that stretch massage could be developed further to help people recover from injury. I knew I had to meet this man. My plan was to work a few years following graduation and then take a vacation to France. As fate would have it, things worked out differently.

Four months after I received my registration, I heard from a fellow student and friend, Heather. She had heard that Joel Savatofski was coming to Montreal to speak at the Touch Therapy Symposium in May 2004. I could hardly believe my luck. I called the symposium organizers and made arrangements to have a private meeting with Mr. Savatofski during his visit in Montreal. We met for three hours on the first day of the Symposium. He was very impressed and amazed to learn how I was developing something that he hadn’t given much thought to for over a decade. He had written the book 15 years earlier, as a young Kinesiology graduate, to facilitate a form of relaxation and sense of well-being. He worked with this modality for less than one year before moving on to other things. I asked him the same questions that I had asked many others: How and why does this work? He apologized profusely for not being able to provide any answers. He encouraged me to continue my work and gave me many tips on how to teach others. He also gave me permission to use his work in any way I felt necessary to encourage its progression.

Over the last two years the Passive Stretch Massage course has slowly taken shape. In mid-March 2006, it was approved by the College of Massage Therapists of Ontario for CEU credit. The first introductory course was very well-received at the Hands Together 2006 OMTA Conference in Ottawa.

The article was originally published in 2006.