LOUDON, N.H. – He was one of NASCAR's first superstars, but Fred Lorenzen's memories of his Hall of Fame career have dimmed as he battles dementia. His Daytona 500 victory, the wins he piled up to become NASCAR's first $100,000 driver, his life on the road, all have been largely extinguished. 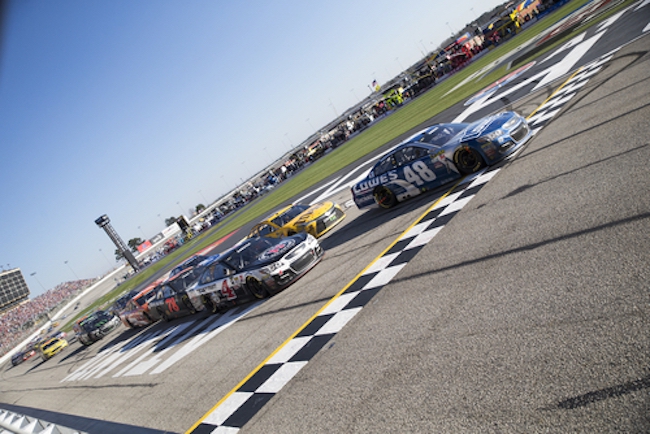 Lorenzen still has flickering moments when he remembers the days when he was NASCAR’s “Golden Boy” for his rugged, movie-star looks. Like in recent years, when he visits Chicago Speedway, not far from his assisted living facility.

“His face just lights up when he’s there,” said his daughter, Amanda Lorenzen Gardstrom.

Nearly 45 years after his last Cup race, Lorenzen hoped he would still make his mark on the NASCAR community. Inspired by Dale Earnhardt Jr.’s decision to pledge his brain to the Concussion Legacy Foundation, Lorenzen became the second known driver to make the same decision.

Gardstrom made it official Friday with a pledge to Legacy co-founder Chris Nowinski. As auto racing grapples with the issue of concussions and head trauma, one of NASCAR’s pioneers is now alongside Earnhardt in the donation queue.

“As a family, we decided we wanted to support Dale Junior and all work together toward a healthy future for these drivers,” she told The Associated Press.

Earnhardt’s concussion history – he missed two races in 2012 – spurred his decision to pledge his brain to the Legacy, a group that works with Boston University on research into chronic traumatic encephalopathy, or CTE, a degenerative disease that doctors believe is caused by repeated blows to the head.

Gardstrom is convinced the 81-year-old Lorenzen has CTE resulting from years of brutal wrecks and hits from the 1960s, one of the most dangerous eras in racing history. Lorenzen won the Daytona 500 in 1965.

“He never stopped to heal,” she said.

She wants to help, and knows her father does, too, and advance the understanding of concussions and their treatment in NASCAR.

“It’s the younger generation that we really need to educate,” she said. “They’re young, they’re hungry, but when they get in a wreck and get a concussion, they know if they don’t get back in the car, someone else is going to take it. We want to change the culture of the sport.”

Earnhardt has become the face of concussion awareness in sports and will skip Sunday’s Sprint Cup race at New Hampshire Motor Speedway because of concussion symptoms. There is no timetable on when NASCAR’s most popular driver might return.

The 41-year-old Earnhardt had already intended to be an organ donor, so he said in April that giving up his brain made sense. Earnhardt said he was motivated by reading about three former Oakland Raiders who donated their brains in honour of teammate Ken Stabler. The quarterback’s brain showed signs of CTE.

“I think the protocols and the advances that we have made in trying to protect ourselves are great things,” Earnhardt said at his pledge announcement. “I’m excited about what NASCAR has done. They have really taken this head on.”

Gardstrom felt the same sense of motivation when she read about Earnhardt’s pledge. She said Lorenzen, inducted into the NASCAR Hall of Fame in 2015, first showed signs of dementia about a decade ago. He has memory loss and uses a wheelchair at Oak Brook Healthcare in Illinois.

The Elmhurst, Illinois, native was one of NASCAR’s first stars to hail from outside the sport’s Southern roots.

“The hardest part right now is that his racing memories are starting to go,” Gardstrom said. “That was the one thing that was really wonderful, to connect and see him light up when he talked about racing.”

She’d like to see others in the sport talk more about concussions.

“That hasn’t necessarily been a hot topic of conversation in any of our meetings,” Sprint Cup champion Kyle Busch said.

Six-time NASCAR champion Jimmie Johnson was part of a 54-member panel that picked Lorenzen for induction into the hall. Johnson has yet to consider donating his brain to the Legacy.

“I am an organ donor so it wouldn’t bother me to do that, but it’s something I’ve not taken steps in and have not discussed at all,” he said.

In the 15 years since Dale Earnhardt’s death at the 2001 Daytona 500, NASCAR introduced a series of measures designed to keep drivers safe, from helmet and restraint systems to impact-absorbing barriers along concrete walls, all designed to cushion high-impact blows.

NASCAR also mandated in 2013 that drivers submit to baseline neurocognitive assessment. When a driver in NASCAR can’t return his damaged car to the garage, a trip to the care centre is required. Under a new three-step process, a driver showing any indication of a head injury must go immediately to a hospital. Concussed drivers must be cleared by an independent neurologist or neurosurgeon before they can get back in a race car.

“We don’t have to wait until more drivers’ brains are studied to make a better concussion protocol,” she said.

Former athletes in other sports have sued their leagues, contending the risks of concussions were hidden from them so they could return to competition. Gardstrom has no interest in a lawsuit.

“No money is going to bring my dad back, but what my goal now is, is to make sure the NASCAR family doesn’t have to go through the similar things we’re going through now,” she said.

Lorenzen hasn’t been forgotten by today’s racing stars – they appreciate a driver who won 26 times in the Cup series. Tony Stewart introduced Lorenzen at his hall induction. Jeff Gordon leaned in for a chat with “Fearless Freddie” last year at Chicagoland before the race.

“He was such a humble guy, that I don’t think he ever realized what an impact he had on the sport,” Gardstrom said.