The Canadian Sport Massage Therapists Association Ontario Chapter 2016 AGM and Conference took place at the Burlington Waterfront Hotel on May 1st. A fantastic agenda was put together by the AGM Organizing Committee, which started with Remo Bucci telling attendees everything they needed to know about being a sport massage therapist. He discussed in detail what it's like to travel to major games. The highlight of his presentation was his talk about the effects of this travel on one's personal life – a very truthful, enlightening and thought-provoking account of his experiences. 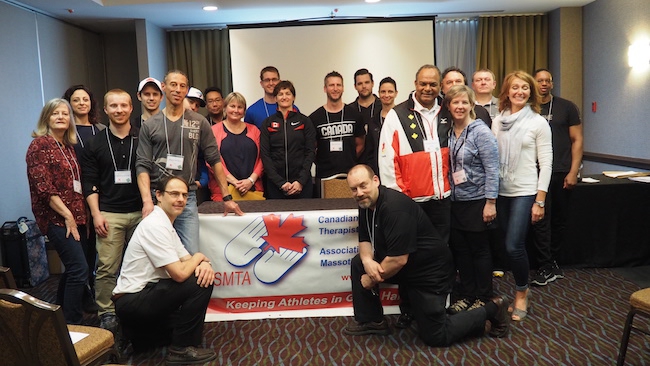 Next on the agenda were two of Canada’s track athletes that participated in the 1992 Barcelona Olympics – Freddie Williams and Mark McCoy. Williams is a five-time Canadian 800m champion, held the Canadian 800m record at 1:45:13 for 10 years and was the captain of the Canadian Track & Field Team for the 1992 Barcelona Olympics. McCoy has won several gold medals in hurdles and 4×100 relays, but most notably, he won gold in the 110m hurdles at the 1992 Barcelona Olympics. The two athletes spoke of their life experiences, their paths to the Olympics and the importance that massage played in their roles as elite athletes. While they contrasted in their views of competition, both were very entertaining, inspiring and an excellent combination to have as speakers. Their thoughts and reflections made an indelible impression on all attendees. Many thanks to Ottawa CSMTA member, Paula Burchat, for her outstanding and insightful moderation of this segment.

The afternoon brought an informative, well-executed and interactive presentation by Jonathan Maister, with discussions on “The Hip.” Jonathan touched on the applied anatomy, related this to common injuries to the hip and showed attendees how to address these with hands-on techniques including fascial work, mobilizations and articular pumping. All techniques were extremely effective and clinic-usable the next day.

The CSMTA Ontario Chapter commended the AGM Organizing Committee for a great job of putting together an enjoyable and inspirational day. The event was sponsored by Know Your Body Best.

The Ontario Chapter is now busy preparing to host the CSMTA National AGM in October 2016.