Four years ago, at age 84, my dad survived a severe stroke. The downside is that during his hospital stay this otherwise fit person was put on a drug regimen and has been taking nine prescription drugs a day ever since. 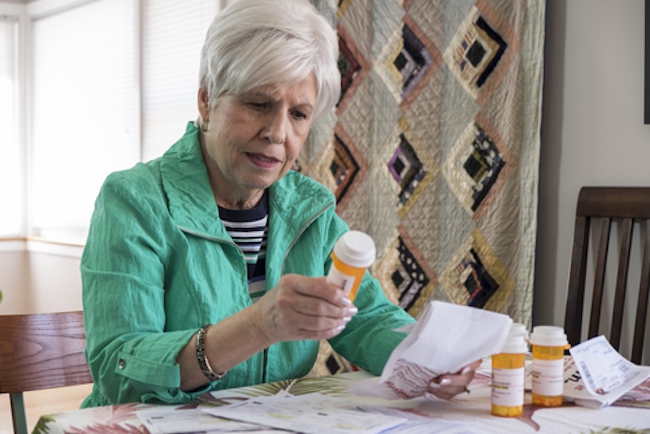 Experts have pointed to increased drug utilization as a driver of health care spending in Canada for some years, but safety issues are increasingly salient. Seniors are five times more likely than younger Canadians to be hospitalized as a result of an adverse drug reaction (ADR). In 2011, over 27,000 Canadian seniors — that is, one in 200 — had an ADR-related hospitalization.

Seniors face a higher risk of adverse drug reactions, in part because of physiological changes as we age that alter the way our bodies respond to medication (pharmacokinetics) and process them (pharmacomdynamics). For instance, our kidneys and liver tend to lose functional ability and become less efficient in flushing out drugs.

Many drugs prescribed to seniors have either not been adequately studied for this age group or have not been formally approved for the conditions they are being prescribed to treat. They are sometimes prescribed without any evidence they are safe and effective for them, and in some cases, even when they are known to present a possible risk (antipsychotics prescribed to older patients with dementia, for example).

It is estimated that as much as half of the medications given to seniors are taken incorrectly or are prescribed in an excessive manner.

Clinical trials often exclude not only older people, but also people of all ages who take a combination of medications. On average, two-thirds of seniors take five or more prescriptions drugs over the course of a year — one-quarter take 10 or more. The prevalence of polypharmacy (multiple medications) has been rising from 54.7 percent of seniors using five prescription drugs or more in 2000 to 66.1 percent in 2014.

Clearly, we need a solution.

In a new Institute for Research on Public Policy Study (IRPP) study, I have documented several collaborative initiatives undertaken by professionals, advocacy groups and health authorities, which seek to provide information and educational resources, reallocate roles and responsibilities and promote innovation. While they are all valuable, their overall effectiveness is limited, because they address only narrow aspects of a much bigger problem.

Governments could use legislation and financial instruments to much greater effect to steer the country’s efforts in the right direction. Required is a comprehensive national strategy, which involves leadership and engagement from Health Canada, provincial and territorial health ministries and local health authorities.

Building on the 2015 recommendations of the Senate Committee on Social Affairs, Science and Technology, such a strategy would entail revising the drug approval process, monitoring newly marketed drugs prescribed to seniors, improving reporting on adverse drug reactions and encouraging independent research into off-label prescription drug use.

Provincial and territorial pharmacare programs should also be extended to provide broader and more systematic coverage of effective nondrug therapies whenever appropriate, to treat older patients with chronic conditions.

Provinces and territories would be required to update their prescribing guidelines regularly and require medication reviews. Health authorities would need to ensure that professionals have access to clinical decision-making tools, as well as accurate and comprehensive information on patients’ medical histories, in order to improve prescribing practices overall.

Clearly, much more can and should be done by governments to address this serious health issue for our aging population.

——–
Nicole F. Bernier is a researcher and writer on Canadian health and social policy and expert adviser with EvidenceNetwork.ca. She worked from 2011 to 2016 as research director at the Institute for Research on Public Policy and is the author of an IRPP Study entitled, Improving Prescription Drug Safety for Canadian Seniors.