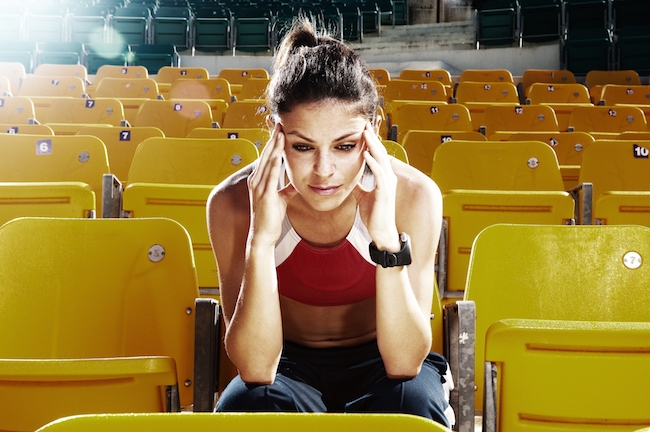 The study, by Leeds Beckett and Loughborough Universities in the U.K., is the first to show that CBT can change how high-level athletes respond to organizational stress within their sport, and that this can have significant benefits for their emotions and performance.

Sport psychology researcher, Dr. Faye Didymus, worked with four high-level female hockey players over nine months, using a CBT technique called cognitive restructuring to help them identify what put them under pressure, understand how they responded emotionally, and then consider more helpful alternative responses. The results were immediate: things that they had viewed as threats, players began to see instead as challenges, resulting in more positive emotions and higher satisfaction with their performance.

“Cognitive restructuring can help people take control of what they think about stress, which is incredibly empowering. This is particularly true in sport where individuals have to perform under pressure, either alone or as part of a team. CBT has been used in health and business settings to improve individuals’ wellbeing and performance, but its wider use in sport is long overdue,” Didymus, from the Carnegie Research Institute at Leeds Beckett University, said.

The players were from the Investec Women’s Hockey League, which, although amateur, includes the top teams in England, with players selected from the League to compete at international level. Although most players are also working or studying full-time, teams can have up to five training sessions and two competitive matches each week.

Selection and deselection from their team and the presence of England selectors at a big game were some of the causes of stress – known as ‘stressors’ – identified by the players during the research. Others included lack of communication from the coach, issues with teammates or training, large crowds at matches and poor umpire decisions.

The players were assessed before the CBT began to identify those who would be most likely to benefit from the program. Each player then took part in an in-depth personalised program of CBT to help them understand their current thoughts about stress, associated emotions, and how these might be changed by CBT. For example, for a player who was thinking ‘I must play well or I will ruin my chance of selection,’ an alternative would be suggested, such as: ‘If I play well, I’ve a good chance of being selected,’ which views selection as a challenge rather than a threat. Players would then be asked to think about how this different thought might change their feelings or emotions.

Over the nine months, the players moved from considering these alternative responses theoretically and in discussion with Didymus to coming up with their own ‘alternatives’ and integrating those into their thought processes whenever they trained or competed.

An immediate positive impact was seen on all of the stress-related variables that Didymus targeted: the players started to view more stressors as challenges than threats, positive emotions predominated, and the players’ performance satisfaction began to increase. When the players were assessed three months after the program, these benefits had been maintained.

One of the players who took part in the research explained her experiences as follows: “If I’m thinking about stressors as a challenge not a threat then I play better. I learnt how to see things as a challenge, which has helped my performance.”

Another said: “I practice thought adjustment in training like I do my hockey so it comes naturally in matches and nine times in ten I’m more satisfied with how I perform.”

Given the success of the trial, Didymus believes that the program she’s developed should now be adapted and tested across a range of sports.

“Ours was a small trial in one sport so we now need to see if this can replicated in other sports with the same positive effects,” she said. “We’d also like to integrate objective measures of performance within future trials, and to look at how improving individuals’ responses to stress can benefit the team as a whole.”