Older people are increasingly active, and this lifestyle shift has contributed to the rise in average age of a person experiencing a spinal cord injury. 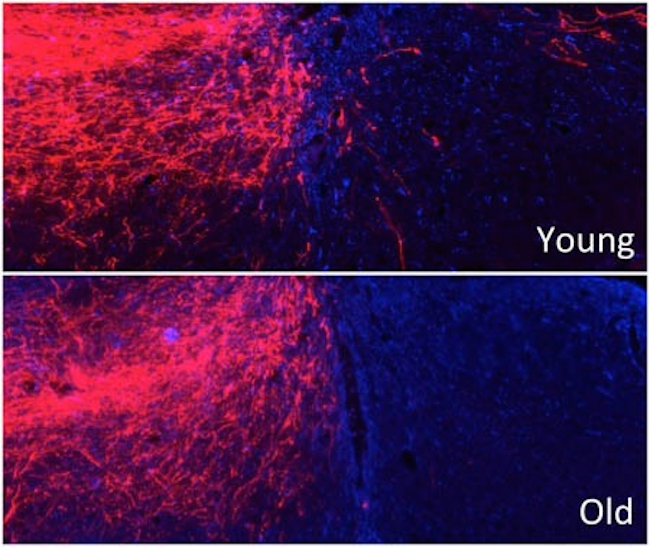 Deletion of the Pten gene promotes axon regeneration in young but not old mice after spinal cord injury.

The changing demographic calls for a better understanding of how aging impacts recovery and repair after a spinal cord injury. Researchers at University of California, San Diego School of Medicine and University of British Columbia (UBC) have now determined that, in mice, age diminishes the ability to regenerate axons, the brain’s communication wires in the spinal cord. The study is published March 31 in Cell Reports.

“This is the first report focusing on the impact age has on axonal regeneration in the central nervous system,” said senior author Binhai Zheng, PhD, associate professor of neurosciences at UC San Diego School of Medicine. “Since many central nervous system diseases and disorders are age-related and are increasingly occurring in older populations, our study will likely have wide implications for both basic research and translational efforts on central nervous system dysfunction and restoration.”

In mammals, axons in the brain and spinal cord are limited in their ability to regenerate after injury. This is true even in young adults, making it a challenge to study the impact of age on regeneration. To examine how age affects regeneration, Zheng and colleagues removed the Pten gene in the neurons of both young and old mice (up to 18 months old), a molecular manipulation known to promote regeneration in young adult mammals.

The researchers found that, as in young mice, Pten deletion in neurons of older mice elicited the types of post-injury cellular responses that often indicate increased regeneration. However, axons in older mice were far less able to regenerate past the injury site, which would be required for any functional gains. In addition, older mice had increased signs of inflammation and other changes at injury sites, as compared to younger mice. These changes indicate that axons in older mice face a more difficult environment for regeneration.

“In older adults, axons are traveling through what is more like rocky, unpaved roads rather than smooth highways — it takes a lot more effort,” Zheng said.

From these observations, the researchers concluded that advancing age is associated with a further decline in the mammalian central nervous system’s ability to regenerate axons. The team studied two different types of neurons and the results were similar.

“The fact that our two labs worked on different types of neurons, initially not knowing each other’s work, but in the end converged on the same conclusion bodes well for the general applicability of these findings,” said co-senior author Dr. Wolfram Tetzlaff, MD, PhD, professor at UBC and director of the International Collaboration On Repair Discoveries (ICORD), the spinal cord injury research centre of UBC and Vancouver Coastal Health Research Institute.

“The important implication is that in our fight against paralysis, we ought to think about how to overcome the increased challenges in promoting repair and recovery in older individuals as well.”

“We were surprised to learn just how quickly our central nervous system declines in its regenerative ability as we age,” Zheng said. “These results suggest that this came much earlier than expected if regeneration were to decline at the same pace as the normal aging process. In other words, middle-aged adults, the peak age group for people living with a paralyzing spinal cord injury today, already have a significantly reduced ability to regenerate, as compared to young adults. It would be interesting to determine if the molecular machineries for neural regeneration and normal aging interact.”

Next, the researchers say they will look for ways to counteract this age-associated decline in regeneration by boosting neurons’ natural regeneration programs, as well as by modifying the terrain in which axons regenerate.