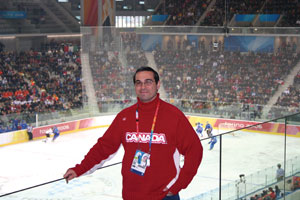 Remo Bucci at the Canada vs Italy game.

I planned a vacation leading up to the Torino Olympics to tour some cities and visit some relatives with my wife Julie and my oldest daughter Hanna. We visited Rome, Florence, Milan, Venice, and my parents’ hometown of Lanciano, near central Italy. Italy, as everyone knows, is rich in history, culture, and of course food. We walked where Julius Caesar walked in the Roman Forum, and we visited the Coliseum where the Gladiators fought. We walked through the aimless corridors in Venice, and saw renaissance art in Florence. We made a point of going to St Peter’s Basilica for a mass. The church is a magnificent, massive piece of architecture, as well as a spiritual haven. I looked forward to telling my mother that we went to mass at the ultimate church. However, she was not impressed when I told her that I napped during the sermon. I admit the walking took a little out of me.

While in Venice, as I was walking across the piazza from our late 18th century hotel, I heard a child’s voice calling “Ciao Papa!” I turned around thinking it was a local youngster, but found instead that it was coming from my hotel where my daughter was waving ecstatically to me from our balcony. She called “Ciao Papa” again and, feeling the history and my heritage and the love for my daughter all around me, I knew at that moment I was having the best time of my life.

In my parents’ hometown of Lanciano, my relatives welcomed Julie and Hanna with open arms and endless food. It was great to see my daughter happily play together with her cousins in spite of the language difference. I also enjoyed watching Julie, who is fourth generation Canadian, trying to converse with my aunt and cousins (and I thought only Italians used their hands to talk).

We headed to Rome, where Julie and Hanna flew back to Toronto and I flew on to Torino. When I arrived at The Olympic Village in Torino, it was a sunny 15 degrees Celsius.

As I headed to the clinic, I was awestruck by a Canadian flag draped on the side of a building. It was at least five stories tall and it was by far the largest flag in the village.

In the clinic, supplies were on the shelves, the computer and TV were up and running and tables were set in place. I knew by the Canadian Flag tabletop that the massage table was the same one I had used at the Paralympic games in Greece.

The Canadian athletes get ready for the opening ceremonies at the Olympic Games in Torino, Italy.

The Medical Team was divided into two groups. The Core Team, which I was on, was to be stationed in the village clinics. Assigned Teams would only be stationed with specific teams. I knew from our orientation in Banff my main clinic would be in Sestriere, but that I would sometimes be needed in Bardonecchia. I was also asked if I would travel to Torino.

I stayed in Torino for a day and a half before being called to Sestriere (home for alpine skiing, Nordic combined, sled sports, biathlon and cross country skiing). When I arrived, it was dark, and the temperature was brisk compared to Torino. Inside the Sestriere security gates, I was met by mud, stones and construction workers. With only eight days before the opening ceremonies, the village was still under construction.

I met the mission staff and the core medical team for the village. It was decided I would stay in the athletes’ village for five days, until the athletes arrived. Then I moved outside of the village to an apartment I shared with two other mission staff. It had a balcony that faced the alpine ski hill.

Although I was working during the races, I did enjoy the view with my roommates and a nightcap at the end of some very busy days.

The last few days before the opening ceremonies, everyone was jovial and anxious to get started. One of the athletes we met told us that he was having back problems and that it was his first time at the Olympics.

Prior to arriving in Italy, the athlete was in Germany where he received an injection to relieve the back pain. Red lights came on as we wondered what medication the injection contained. The athlete thought that, because the German doctor was not working for any sports team, there was no concern about any contraband in the medication.

This same athlete told us he took an over-the-counter cough medicine. The doctor and therapist assistant spoke to him at length about doping control and therapy protocols. Luckily, a call to the doctor who treated him in Germany confirmed the substances in the injection and cough medicine were permissible.

Every athlete I worked with was appreciative of the services that the medical and mission staff provided. The Canadian Olympic Committee (COC), on behalf of the athletes, told the international community that their goal was to place third in the total medal standings, and win 25 medals. The athletes were ready for the challenge. On the first day, Canada was off to a great start with a gold medal in the moguls. Then we hit a dry spell and it was beginning to feel like the Canadian winter team was heading for disappointment.

Following the elimination of the men’s hockey team, though, the tide began to change and Canada took home four medals that same day. The medals kept coming.

The athletes worked hard and met their goal of a third-place overall finish and Canada was only one medal shy of their 25 medal goal.

During the course of the games I treated five to eight athletes per day for 30 minutes to an hour. When my patients were out watching the other venues, I took the opportunity to go cheer on the athletes as well.

I attended two men’s hockey games, including the one I really wanted to watch – Canada versus Italy. Although I was pleased when Canada won, I did feel sad for Italy’s loss.

The women’s hockey final against the Swedish team was thrilling. The arena was a sea of red and white cheering fans. During intermission, we ordered some Ritz crackers (did not have popcorn) and wine (no beer – it is Italy, after all). We sipped our Barolo, nibbled our crackers, and watched joyfully while our team won the gold medal.

The snowboarding competitions were exciting, especially snowboard cross. Four athletes board down a winding downhill track with jumps. The women’s final included two Canadians, and we thought Canada was sure to win two medals. But, anything can happen and it did. Our favoured athlete fell and suffered a slight concussion. Our second athlete flew through a fence barricade and suffered minor bruising.

The American who was quite a distance ahead at this point fell and the Swedish athlete got the gold. The American came second, and our fence girl crawled out and finished the race in third place.

The men’s skeleton was exciting and unnerving. What would possess a person to go head-first at speeds that would earn me a hefty fine and seven demerit points in my car? The Canadian team came in first place, second place and fourth (by .04 seconds). 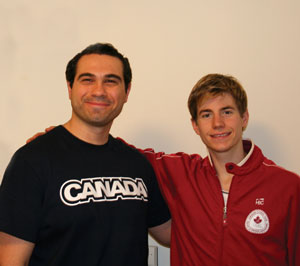 Remo Bucci with Canadian figure skater Jeff Buttle, who won a bronze at the Torino Games.

There were times when I treated athletes who did not make it to the podium. This never gets easier. Words cannot make them feel better. In fact, some of them have to go through a withdrawal process, and the worst thing you can do, as a therapist, is talk to them.

After the closing ceremonies, I realized that the time had flown. Upon my arrival, everyone was hustling to get organized. The next thing I knew, the media reports were doubtful that the Canadian team would meet its medal goals. Then we were gleaming with pride at how well we had done. Before I knew it, the Canadian flag was raised in anticipation of the next winter Olympics.

Thanks to the patience of my wife, Julie, I have been able to pursue my passion for the last 11 years and in particular the last three years traveling around the world. Julie is also my colleague and who better to understand than another massage therapist?

I hope to write more about my experiences in the sporting world. However, before I set off on another mission, I have a “to do” list as long as my arm to keep me busy at home for at least a few years.