Skillfully applied sport massage therapy can increase performance, decrease potential injury and assist the athletes’ mental preparations. The techniques require a skillful and appropriate application, as it can result in the difference between qualifying, winning, losing, or obtaining a personal best time or score for the athlete. 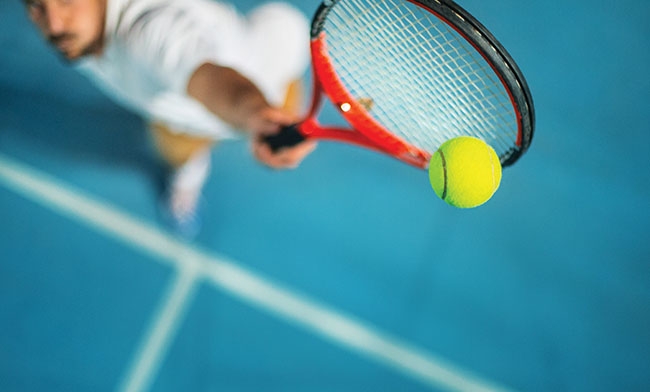 Athletes have recognized the benefits of introducing regular sport massage into their regimens, as it reduces fatigue, promotes flexibility, improves endurance, helps prevent injuries and prepares their body and mind for optimal performance.

Sport massage therapy takes into consideration the sport-specific movements placed on the individual athlete for that sport. The sport massage therapist must be knowledgeable in the biomechanics and functional patterns of the specific sport in order to develop injury prevention strategies and treatment programs for the athlete.

Sports require a full range of motion from the joints, muscles and connective tissue that are critical to the movement being executed. Let’s look at the synergistic relationship between the shoulder and the scapula and how it relates to movement and sport.

The relationship of the humerus movement relative to the scapula is called the scapulohumeral rhythm. Limited mobility of the scapula can limit the three-dimensional movement of the shoulder complex, not allowing the scapula to clear the rotator cuff when raising the arm (Von Eisenhart. Clinical Orthop. Relat. Res, 2005.) Another key component related to the movement of the shoulder/scapula complex is the amount of mobility within the thoracic spine as reported by Tate A.J in an article published in the J.Athl.Train, 2012.

Scapular mobilization techniques are useful to increase scapular movement, which may deteriorate  due to the change and release of adhesions in the scaplulothoracic muscles. These techniques can lead to increase of accessory motion, increase range of motion at the shoulder complex, and improve periarticular muscle performance as described in the BMC Musculosketetal Disorder, 2015 journal by Sharma SP.

Scapular mobilization procedures involve superior, inferior, medial and lateral glide with the athlete lying on the unaffected side. The athlete and therapist positioning are the same for all with a few changes in the hand placement to allow for the appropriate scapular mobilizations. (Figures A, B, C and D.) To begin, have the athlete side lying facing the therapist. The athlete’s arm is in a neutral position (shoulder and elbow flexed) and resting on the therapist’s arm. A pillow can be used as a barrier and for additional comfort, although it may restrict movement. All movements are to start in a grade 1 and gradually increase to grade 4 mobilizations as the athlete’s tolerance increases. Suggested parameters will vary, however eight to ten repetitions in each grade with a hold in each mobilization for three seconds is adequate, within the athlete’s tolerance. In order for these techniques to be effective, the athlete movements must be passive and the therapist must use the athlete’s trunk to provide the key force through the arms, to allow for appropriate movement in the scapulothoracic (ST) region for the mobilization to occur. 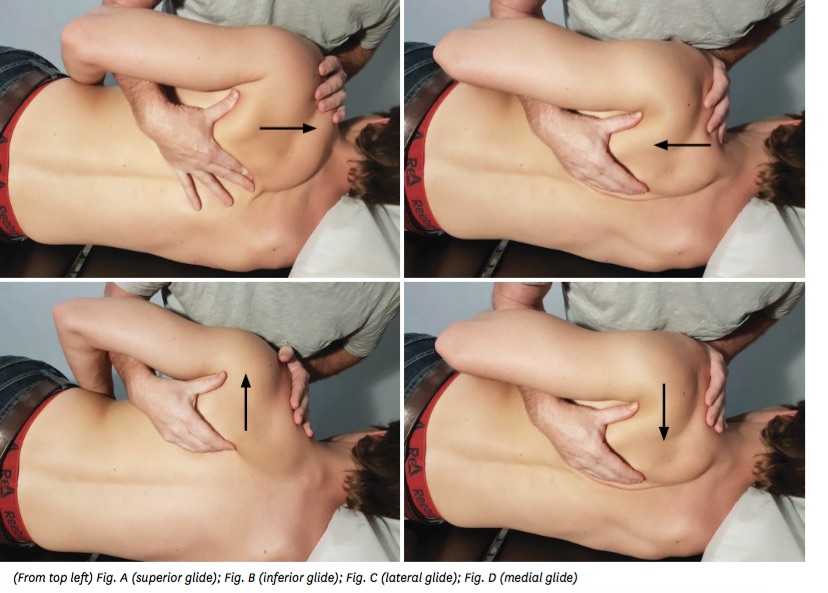 Superior/Inferior Glide (Elevation/Depression) – The lower hand is placed around the inferior angle of the scapula with the thumb and forefinger along the lateral and medial scapula borders. The upper hand grasps the spine of the scapula, cupping the heel of the hand anteriorly over the clavicle. The therapist will mobilize the scapula superior and inferior. Superior glide (Fig. A) will increase ST range of motion (ROM) and lateral rotation of the shoulder, whereas the inferior glide (Fig. B) will increase medial rotation of the shoulder as well as the ST ROM.

Medial/Lateral Glide (Protraction/Retraction) – The lower hand is placed around the inferior angle of the scapula with the thumb and forefinger along lateral and medial scapula borders. The therapist’s upper hand grasps the spine of the scapula, cupping the heel of the hand anteriorly over the clavicle. The therapist will mobilize the scapula medial and lateral. The medial glide (Fig. D) will increase ST joint retraction, depression and medial rotation and lateral glide (Fig. C) will increase ST joint protraction, elevation and lateral rotation.

Restricted hip mobility has shown strong correlation with various pathologies of the hip, lumbar spine and lower extremity, and can consequently continue to have effects not only at the involved joint, but throughout the entire kinetic chain. Any sport that requires squatting, pivoting, plant-and-cut motion and similar movements will involve hip flexion and internal rotation. Hip stability and mobility are key components to create the speed and power production for sprinting, bounding, jumping, and agility movements. The main muscle groups responsible for propelling the body forward during running and jumping exercises are the quadriceps, hamstrings, and calf muscles. The hip ﬂexor muscles may also contribute to these actions. In addition, the hip ﬂexor muscles assist in bringing the free leg forward and upward during the recovery phase of running. An increase in hip flexion strength can help to improve sprint and agility performance for the physically active as well as untrained individuals.

Another favourite technique that high performance athletes often ask for is a hip flexor soft tissue release (Figures E and F). This technique can lead to increased mobility and range of motion in the hip, can help to decrease low back and knee pain and can increase core stability. The effects are also seen in the training room, with a potential increase of speed, strength and power in that athlete.

This technique is effective when you have access to ASIS and the structures around it. This hip flexion technique involves flexion and extension of the hip with one arm and soft tissue release with the other arm. To begin, the athlete is lying in a supine position and is close to the edge of the table to help with positioning and ease of technique. The therapist is treating on the same side of the athlete.

The therapist can modify this technique throughout the hip flexion movement to incorporate ischemic pressure to release any trigger points or adhesion found along the route, as well as changing the frequency, depth and intensity to increase the results of the treatment. The technique can be treated in both passive movement (soft tissue release) as well as an active movement (active release technique).

As with any massage techniques, there are various modifications that can be used to correct and alter function and imbalances, and to prevent and correct biomechanical dysfunctions. A combination of massage therapy and mobilization integrated directly into the athlete’s fitness routine can make a difference in athletic performance. The two techniques described above are frequently used in my clinical practice, and have been successful in increasing on-field performance and reducing injury, both in training and during game-time.

Jason White  is an accomplished Certified Athletic Therapist and RMT with a special focus in high performance athletes. A health care provider for over 10 years, he’s been selected for multiple major games, including (most-recently) as part of the core Health and Science Team for the Canadian Delegation of the 2018 Pyeongchang Winter Olympics. In addition, in 2017 Jason was nominated for the Colleges Ontario Premier’s Awards, which recognize the outstanding social and economic contributions of Ontario’s college graduates.
Print this page