Features Practice Technique
Visceral massage: The mind gut interaction and the role of the massage therapist

Visceral massage is a massage therapy that focuses on a complex part of anatomy; namely the gastro-intestinal tract (the gut). 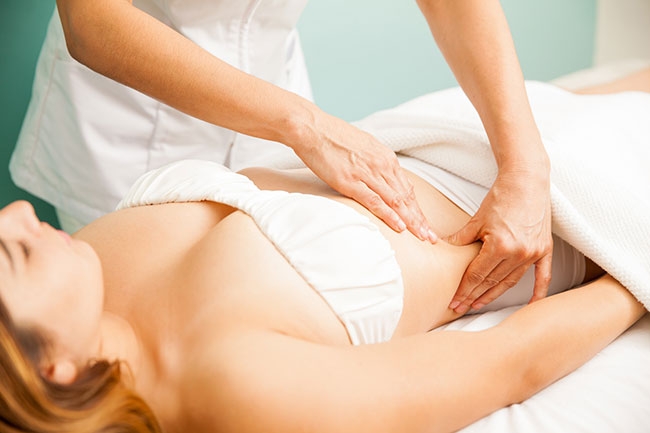 Visceral massage is a massage therapy that focuses on a complex part of anatomy; namely the gastro-intestinal tract (the gut)

Barral’s writings briefly mention the relationship between the TCM approach in relation to visceral massage by citing Asian health practitioners who recognize that energy flows through the body and reaches its zenith in specific organs and/or acupuncture channels.3 Alison Harvey, one of Barral’s students, takes this relationship a little further in her book, A Pathway to Health by outlining similar relationships between the organs and emotions. It should be noted that there is some disparity between what Harvey believes are the emotions linked to particular organs as opposed to the assertions made by the Taoist and other TCM practitioners.

Sign up to get the latest news and events from Massage Therapy Canada. Our E-newsletter will be sent to you only once per week, on Tuesdays.

Perhaps this inconsistency in claims has led to criticism levelled by some, including physiotherapist Harriet Hall.4 But with more research, the bene ts might become clearer. Published in the European Journal of Pain, Panagopoulos, Hancock et al,5 suggest that the use of visceral manipulation might be useful in the long-term management of lower back pain. While the short-term benefits weren’t obvious, those undergoing visceral massage did show a reduction in back pain over a longer duration (i.e. one year), prompting the authors to suggest that, “it is possible that, with continuing visceral nociceptive input, control patients experienced greater rates of recurrences of lower back pain com- pared with the visceral manipulation group.”

This isn’t the only study to find clinically meaningful benefits following the use of visceral massage as part of treatment for lower back pain. A paper by McSweeney et al,6 examined the immediate effects of sigmoid colon massage on pressure pain thresholds in the lumbar spine. Results from this study demonstrated a statistically significant reduction in pressure pain thresholds immediately after massage intervention. In my own practice, visceral massage techniques focusing on the ileocecal valve have also had the effect of relieving lower back pain in some clients. Possibly the most striking anecdotal results have occurred following visceral massage techniques on the small and large intestine of a client suffering from constipation caused by ingestion of opioid medication that can slow or stop peristalsis.

Finally, for evidence-based therapists who may be emotionally invested in the scientific paradigm, I would suggest the paper, “You May Need a Nerve to Treat Pain.”7 In this article, De Couck and colleagues reviewed the role of the vagus nerve in modulating pain signals, discussing five distinct mechanisms by which it exerts inhibitory effects upon the pain experience. They wrote:

“The vagus nerve may play an important role in pain modulation by inhibiting inflammation, oxidative stress, and sympathetic activity, and possibly by inducing a brain activation pattern that may be incongruent with the brain matrix of pain. Finally, vagal activation may mediate or work in synergism with the e ects of the opioid system in pain modulation. All these mechanisms are thought to in- fluence neuronal hyperexcitability, culminating in the perception of less pain. For all the above neurobiological reasons, it seems justified to increase vagal nerve activity to reduce pain as this targets all five mechanisms with one intervention. This hypothesis is supported by experimental studies on animals and preliminary intervention trials on humans.”

The vagus nerve has been attributed experimentally to influence pain in a variety of ways; deep breathing will augment vagal activity and has been shown to reduce pain.8 In all cases, it appears that vagal stimulation influences central pain processing, rather than peripheral nociceptor activity. Could it therefore be that visceral massage, as performed by trained massage therapists serve as a useful form of vagal stimulation?

Coincidentally, the training I offer in visceral massage to students includes a focus on breath transference. That is, the practitioner focuses on slowly reducing their rate of inhalation and exhalation with the client’s breath. The palpatory process accompanies this process directly over each organ influencing the vagus nerve.

There are also clear links between this research and study by neuroanatomist A.D (Bud) Craig who provides clinical evidence regarding the relationship between viscera and the area of the brain called the insular cortex. Craig spent nine years studying the neural pathways from viscera to the anterior insular cortex.9 His claim is that insular function will enable deep insights into the neural basis for subjectivity, feelings, volition, individual personality, belief, and self-modulation.

I maintain that visceral massage is a metaphysical experience paralleled by biological responses. There is a running dialogue between the gut and the brain that an experienced massage therapist can facilitate by providing a positive connection between them.

While we have addressed some of the science and ancient art connected with visceral massage therapy, there are many more components to understanding how therapeutic massage techniques can address the sensitive digestive system and the emotions related to the brain-gut connection. Visceral massage is part of both functional medicine and ancient traditional therapy. It is an emerging therapeutic area for us in clinical practice, addressing conditions such as IBS, lower back pain and a range of both gut issues and emotional concerns.

GREG MORLING has been a remedial massage therapist for over 30 years and has written various scholarly articles and delivered workshops on a range of topics. He has a deep respect for the traditions of indigenous cultures and sees them as providing the foundation for our present healing traditions. Greg has worked in the spa and wellness industry both nationally and internationally for many years as a consultant, author, educator and speaker. You can visit his website at mostlymassage.com.