Ontario Premier Kathleen Wynne, whose Liberals face an uphill battle in the spring provincial election after 15 years in office, countered her opponents' election promise of change with one of her own Monday, saying only her party can deliver "big change." 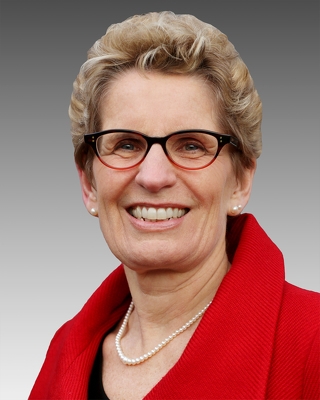 Wynne made the comments just hours after the government delivered a throne speech that promised major spending in health care to tackle hospital wait times and expand home-care and mental-health services, while reducing the overall deficit.

“I’m proposing that we make big changes in the way we support care for each other,” Wynne said in an interview with The Canadian Press. “Yes, it’s an extension of what already exists but it’s a real leap forward in terms of putting supports in place.”

While touting her party’s plan, Wynne took a swipe at her main rival, newly minted Progressive Conservative Leader Doug Ford whose party is leading in the polls.

“What Doug Ford’s suggesting is actually going backwards in status quo,” she said.

Wynne said her plans – to be spelled out when the government tables its budget on March 28 – will help address the challenges she believes people in Ontario are currently facing. She praised NDP Leader Andrea Horwath for some of her ideas, which Wynne said were designed to care for people.

“I like some of her ideas,” Wynne said of Horwath. “It’s the same impulse to really respond to the anxieties people are feeling. What Doug Ford’s proposing will not address people’s anxieties.”

The speech from the throne, read out by Lt.-Gov. Elizabeth Dowdeswell, offered no specific numbers for the promised investments but suggested that health care is poised to be a major focus of the coming budget.

The government also announced plans to expand the OHIP Plus program that currently offers free pharmacare to residents under the age of 25, saying it wants to make the program available to a larger swath of the population.

“Your government’s plan for care and opportunity is the right way forward for Ontario’s people, and Ontario’s economy, because the well-being of both are intrinsically linked,” Dowdeswell told the legislature.

Last week, Ontario’s Financial Accountability Office warned that a growing and aging population is adding pressure to Ontario’s health-care system and spending isn’t keeping up – a situation that could result in compromised quality of care if left unaddressed.

In 2012, the province tried to slow health spending by imposing a four-year freeze on hospital funding, increasing hospital efficiency and by restraining wage growth in the sector.

Since then, the province ratcheted up spending with a so-called “booster shot” of $6.9 billion of funding in the 2017 budget.

The speech also hinted at measures to address the cost of child care, which it identified as a “stumbling block” for many families.

It also contained promises for later in the child’s life cycle, saying it would expand the program that currently offers free tuition to thousands of people.

The government said last week that the 2018 budget will run a deficit of one per cent gross domestic product – which could be as high as $8 billion – would map out “a clear path” back to balance.

Hours after the throne speech, Ford told a boisterous rally in Toronto that the province can’t afford the Liberal government’s promises, adding that it amounts to billions in new spending and debt.

“The problem with Kathleen Wynne, the problem with her government – we saw it today in her throne speech – they will say and promise anything to stay in power,” Ford told supporters on Monday night. “(She) wrote a lot of cheques with the taxpayers’ bank account. … We all know the finances of this province and I can tell you all those cheques are going to bounce.”

Horwath likened the plan to her own dental-care platform announced on the weekend, which saw her promise to invest $1.2 billion to subsidize dental care for 4.5 million residents.

“The difference is New Democrats actually believe these things and will implement them upon being elected,” Horwath said, adding that the Liberals often change their tune after they’ve already been voted in. “We believe in these things before elections and after elections.”

Horwath has said the money for the dental care program, dubbed Ontario Benefits, would be raised through tax increases on corporations and wealthy individuals. She has said her government would run a deficit, but not provided additional details.