Features Practice Regulations
Politi-size me! Massage therapists are passionate, but they need to be political 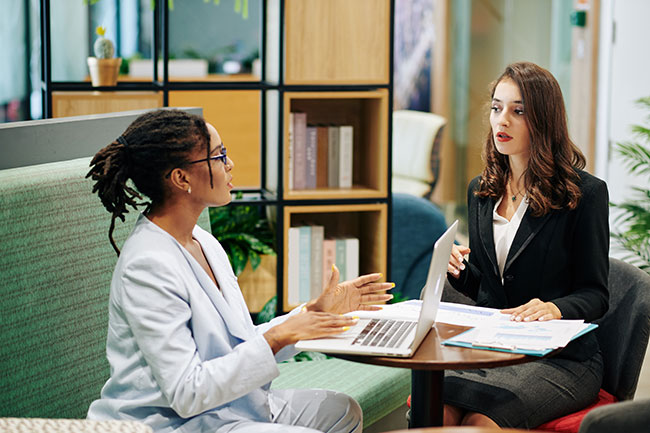 Penn Financial in Niagara commissioned a short video commercial to attract prospective customers. The commercial opened with the customer having an awkward and confusing conversation with a teller at one of the competing banks. Unexpectedly, the commercial panned from the conversation at the bank to the prospective customer lying on a massage table in an outside open area. A male standing over him – presumably a massage practitioner – slapped the customer on the buttocks, emphasizing how easy banking was at Penn Financial. The commercial was scheduled to appear at local movie theatres preceding the main picture.

A handful of massage therapists saw the pre-release commercial online and contacted Penn, outraged at the implications presented in the commercial. One diligent RMT called the video producer directly.  Despite the expense of production and cancelling advertising contracts, Penn pulled the commercial before it aired.

Lipton Tea via magazine advertisements promoted the relaxation potential of sipping a cup of their tea.  They compared this experience to an apparently rough and rugged massage with “Helga.”  Helga presented in the ad as a hefty, muscled, surly-looking middle-aged European woman wearing a smock, menacingly gripping a hand towel. She towered over a massage table in a locker room setting no one would confuse for comforting. The advertising copy prompted the reader to consider their preference: relax with a cup of Lipton Tea or be subject to a “relaxing massage” with Helga?

John Sanderson, then Executive Director of the Ontario Massage Therapist Association (OMTA…pre-RMTAO) wrote a letter to Lipton, describing the professional stature of massage therapists and professing how damaging Lipton’s ad could be to the professional image. Lipton pulled the ad.

These two previous examples of professional advocacy are inspiring, but uncommon. Massage therapists have largely avoided advocating their interests in the public sphere. They are passionate advocates for the health and wellbeing of their patients, occasionally calling gatekeeper health disciplines directly in the patient’s interest. RMTs push patients to exercise, sleep enough and get sufficient rest. They demonstrate impressive results and want to be recognized and respected as practitioners in primary health care. So why do they stop short of the ask, “Include us in health care funding, research and provision of services.” Massage therapists are demonstrably passionate; they need to be political.

RMTs were justifiably disappointed six years ago when two smaller, arguably less credible professions zoomed past to claim exemption from the Harmonized Sales Tax (HST).  The Financial Post reported, “The 2014 budget exempted acupuncturists’ and naturopathic doctors’ services from HST and GST, adding them to list that already included physicians, dentists, nurses, midwives and optometrists. The government noted acupuncture and naturopathic services are now regulated in at least five provinces.”  Mobilizing resources to become regulated in five provinces and hiring a lobbyist were key to the win.

You would expect this occurrence to galvanize massage therapists across Canada to quickly follow suit.  While there was a lot of rageful disappointment expressed on social media, it took another five years before a fifth province was regulated and the process of applying for HST exemption begun.

Why aren’t massage therapists more politically active? Relations with the insurance industry are frequently adversarial, with regular threats to a reduction or elimination of payment for RMT claims.  Gatekeeper health care professionals are inclined to refer to higher-status physiotherapists.  Objectionable media coverage linking massage therapy to insurance fraud or the sex trade largely goes uncontested by representative associations. With threats to status, livelihood and patient access, RMTs have all the reasons necessary to exercise their activism.

In the 2018 annual report of the College of Massage Therapists of Ontario (CMTO), 13,512 RMTs are registered as active.  With this shear number of practitioners, you’d expect grassroots and province-wide relations with government, insurers, gatekeeper health professions and the public media to be robust.  Yet many of the RMTAO’s Community Based Networks (CBNs) struggle to get RMTs out to their locals for community building and sharing.  With 5982 members (2018 numbers), the RMTAO represents only 44% of active RMTs in the province.  How can the professional association representing the interests of all massage therapists operate when less than half support them financially?

Every massage therapist can and should be advocating. To do my part, I met with the Member of Parliament in my riding, Chris Bittle, to ask for inclusion in federal health initiatives related to research and health promotion, and to address inequities in funding physical “musculoskeletal” impairments.

I explained to Mr. Bittle that in the previous year I was one of 24 delegates from the RMTAO to attend a Queen’s Park government relations exercise. We met with 45 WLA’s and Senior Policy Analysts, and asked to be included in government initiatives leading to better health outcomes particular to chronic pain, palliative care and homecare. I was hoping to garner the support of my federal government representative.

I explained to Mr. Bittle and his assistant Zach Dadson, “If I have a heart condition, a lung condition or kidney condition, our provincial health insurance plan removes the cost concern.  But if I have a problem with physical function – walking, lifting, working – I’m confined to my savings (after-tax dollars) or workplace insurance, if I have it.” I elucidated how workplace insurance discriminates for high-paid, high-skilled workers, yet is regularly unavailable to Canadians working part-time, contract and low-paid work.  This creates a barrier for the latter seeking relief from physical impairment and dysfunction.

I peppered my presentation with facts. One out of 10 Canadians experience chronic pain, 75% report back pain sometime in their lives, and productivity losses (a 2011 report) are estimated at $37 billion related to job loss, sick leave and disability.

According to a 2016 Simon Fraser Institute report, 44% of Canadians have utilized massage therapy care.  Citizens seek our care for neck pain, low back pain, headaches, recovery from work injuries and physical trauma. Citizens also seek massage therapy for positive psycho-social outcomes, positively affecting symptoms of anxiety and depression, quality of sleep, and a reduction in self-reported pain perception.  I pointed out these are important considerations in light of the opioid crisis and other social-economic issues currently facing Canadians.

In my review of the role of government, I learned the federal government promotes health research. I asked Mr. Bittle to support research for promising interventions against physical impairments. I provided an example of cost savings: I treat patients with carpal tunnel syndrome, a neuropathy that affects sensation and power in the hand. My treatment plan is on average $300 – no surgery, no time off work.  The current health funding model favours surgery at thousands of dollars, 6-12 weeks of physiotherapy plus lost productivity with time off work.  I implored Mr. Bittle to support comparative studies for promising therapies that demonstrate efficacy, are minimally invasive and save taxpayer dollars.

I proposed how might research be funded. I suggested insurance companies should be complicit in funding research, since they would benefit from funding only evidence-based interventions that showed promise, while supporting small professions unlinked to research institutions. I further suggested government could consider expanding tax credits for healthcare expenses, and providing incentives for health savings accounts.

My Member of Parliament and his assistant were gracious, listened intently and offered a number of suggestions as to how our profession may advance initiatives. They advised areas where government could be involved, and offered to speak to counterparts in the Ministry of Health. All it cost me was a few hours preparation time and a 30-minute meeting.

If you want things to change, preserve and protect your valued profession, and your livelihood, then it only requires a little time to contact your representatives in government, and respond to negative news media and build your network of influential people. Don’t go it alone: your professional association has resources. Connect with your local community of massage therapists for support. Take a class in public and media relations and refine your ability to put forward a cogent and compelling argument. If it is to be, it is up to me – and you.

Donald Quinn Dillon, RMT is a practitioner, speaker and practice coach. Check out his recent book On Practice: From Entry-Level to Established Massage Therapist at DonDillon-RMT.com.

Related
Are the costs and rules associated with regulatory bodies too burdensome?
Hands-on and heart-to-heart
Cupping therapy: the evidence versus the language
PODCAST episode 10: Returning to practice in pandemic times
Tags