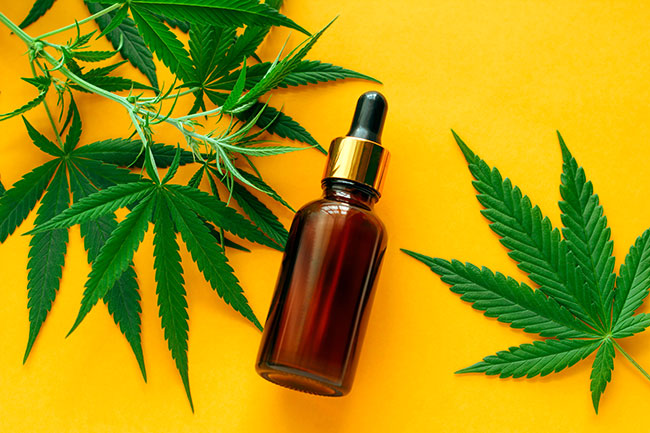 On October 17, 2018, the Government of Canada legalized recreational cannabis use, and in the ensuing months, cannabis-infused massages have increased in prominence and popularity. Medical cannabis clinics like Compass (Kelowna, BC) are providing patients with educational resources on how to mix their own cannabis-infused massage oils, while Ste. Anne’s Spa (Grafton, ON) has already become one of the first spas in Canada to offer a “Canna-Massage” involving hemp-derived CBD suspended in an essential oil blend. (This is NOT performed by a registered massage therapist.)

CBD, or cannabidiol, is a non-intoxicating cannabinoid found in the hemp/cannabis plant. Consumers have heard strong anecdotal evidence of CBD’s purported pain-relieving and stress-reducing properties, and many of them are now seeking out cannabis-augmented massage experiences in order to enhance the relaxing and pain-relieving effects of massage. But like all consumer-led trends, this one raises several important questions. Does the science live up to the hype? What are the risks around introducing cannabis into massage?

Cannabis may very well hold therapeutic value in massage settings, but there are some important caveats to consider. The profession must clearly understand what is science and what is myth when approaching the issue of cannabis in massage treatments.

Emerging PTSD Studies Suggest Role of Endocannabinoid System
Zach Walsh, PhD, is an Associate Professor of Psychology at the University of British Columbia and a registered clinical psychologist. Walsh is the lead investigator at UBC’s Therapeutic, Recreational, and Problematic Substance Use Lab. He is currently leading a clinical trial investigating the safety and efficacy of cannabis therapy in participants with chronic, treatment-resistant PTSD.

“We don’t have all the data yet (for our study), so I can’t talk about our results,” he says. “But there are cross-sectional studies and open-label trials showing that people with PTSD experienced symptom reduction associated with cannabis use, and that’s what led us to start this clinical trial.”

Managing the symptoms of post-traumatic stress disorder is one potential area of crossover for massage and cannabis. One American pilot study on National Guard veterans returning from Iraq and Afghanistan followed the veterans for 8 weeks. Researchers had the veterans take the PTSD Checklist (PCL-C) test at baseline and at a 4-week and 8-week follow-up assessment. Participants who received a 20-minute massage two to three times per week showed a statistically significant reduction in self-report measures of physical pain and scored lower on the PCL-C at 4 and 8 weeks compared to baseline. (1)

“I’m curious as to whether there’s a connection to the pain aspect,” Walsh says. “Pain has bottom-up and top-down components. There’s bottom up, where messages are going to the brain and being interpreted as pain. But there’s also the top-down system where the brain regulates pain signals. That’s why things like anxiety and depression make pain worse.”

Walsh says that cannabis may reduce anxiety, which could have implications with respect to pain management and massage. One 2014 systematic review found that massage therapy increased serum anandamide concentrations in participants by 168 percent. (2) Anandamide is one of the many endocannabinoids – endogenous neurotransmitters that bind to cannabinoid receptors in the brain and regulate neurotransmission. Anandamide and THC have similar chemical structures, which is why they produce similar effects in humans. Both cannabis and massage therapy have separately been found to increase anandamide concentrations in the brain, which raises the question as to whether incorporation of cannabis therapy into massage would have an additive or synergistic effect.

Topicals Pose Low Risk, But More Research is Needed
When it comes to cannabis, risks are always a concern. While there are certain cardiovascular health risks associated with smoking or vaping cannabis – or any plant material, for that matter – topicals are an entirely different animal. Walsh says that the psychological risks of CBD topicals are minimal, although he understands why Canada’s massage therapy colleges are reluctant to even discuss CBD.

“I can only speak to the psychological side of [CBD’s potential risks],” Walsh says. “I can’t imagine that a CBD topical would have any horrifically bad risks. Psychologically, the risks are quite minimal.”

Other medical experts tend to agree. According to Harvard Health Publishing Contributing Editor Peter Grinspoon, MD, the known side effects of CBD include nausea, fatigue, and irritability. Grinspoon also says that CBD may interact with Coumadin to increase the presence of the medication in the blood.(3) Meanwhile, Brent Bauer, MD, Director of Complementary and Integrative Medicine at the Mayo Clinic, says that while CBD can cause side effects like dry mouth or reduced appetite, the compound is frequently well tolerated. (4)

Furthermore, the compound doesn’t appear to be habit-forming. CBD doesn’t cause the same “high” that THC causes, and in fact, CBD appears to counteract the intoxicating effects of THC, according to the Government of Canada. (5)

“Topicals is a mysterious area,” Walsh says. “Patients have been leading the way in cannabis the whole time. I take patient reports very seriously, because we wouldn’t have any of these breakthroughs if not for the patients who were initially scoffed at. That said, we don’t understand the pharmacokinetics very well. The harms aren’t very pronounced – I haven’t heard many negative things about topicals – but we need more research.”

Cannabis’ Future (or Lack Thereof) in Massage
Much of cannabis research is still in its infancy, and while the initial results are promising, it’s still too early to make a determination around whether or not cannabis should have a place within the scope of practice for massage therapy. The College of Massage Therapists of Ontario’s official position is that massage therapists should refrain from administering cannabis to clients during treatment due to potential interactions with medications and lack of information about cannabis topicals. (6) In October 2018, the College of Massage Therapists of British Columbia issued a notice to the profession instructing RMTs to refrain from applying or administering cannabis products during massages unless and until the B.C. Ministry of Health confirms that cannabis falls within the RMT scope of practice.(7) Registered massage therapists are also not permitted to make recommendations to clients about cannabis use.

In other jurisdictions, though, the situation is different. Only five provinces regulate the massage therapy industry, so in places like Nova Scotia and Alberta, there are no industry regulations around cannabis in massage because there are no industry regulators. In those provinces, the only rules governing the use of cannabis in massage are the general cannabis laws regarding sale and distribution found in the federal Cannabis Act.

Research into cannabis therapies for ailments like chronic pain is showing promising early results; however, the body of research around cannabis is still developing, and it’s too soon to say for certain whether cannabis ought to fall within the scope of practice for massage therapists. Canada’s various massage therapy colleges tend to vary in their opinion of cannabis, with some adamantly against, and others advocating for a “wait and see” approach. Walsh, though, believes that cannabis has great potential for use in massage therapy, provided that clinical research can catch up to patient anecdotes.

Overcoming reefer madness
Walsh says that cannabis research is still in its infancy. Cannabis-demonizing initiatives, such as the War on Drugs and the 1936 film Reefer Madness, resulted in tight regulations that have slowed research – and now that cannabis is legal for recreational use, scientists are scrambling to catch up. Walsh says that regulating cannabis is a balancing act – regulations need to ensure high-quality research without making it impractical to conduct studies.

Canadians substituting cannabis in place of NSAIDs, opioids
With an opioid crisis looming and emerging evidence suggesting that NSAIDs aren’t as harmless as was once thought, media reports are prompting Canadians to turn to cannabis. Veteran Affairs Canada data shows that 10,000 veterans used medical cannabis in 2018, compared to only 1,700 in 2015. Since 2014, veterans’ use of oxycodone has dropped by 75 percent. (8)

Do topicals cause a high?
Short answer: No. Amanda Reiman, PhD, a drug policy instructor at UC Berkeley, says that topically administered THC doesn’t enter the bloodstream – it accumulates in fat stores instead. For the same reason that administering rubbing alcohol to skin doesn’t cause intoxication, using cannabis topicals doesn’t cause a high. (9)

Mike Straus is a freelance writer based in Kelowna, British Columbia.

This article was originally published in the Fall 2019 edition of Massage Therapy Canada, and published online Oct 1 2019.